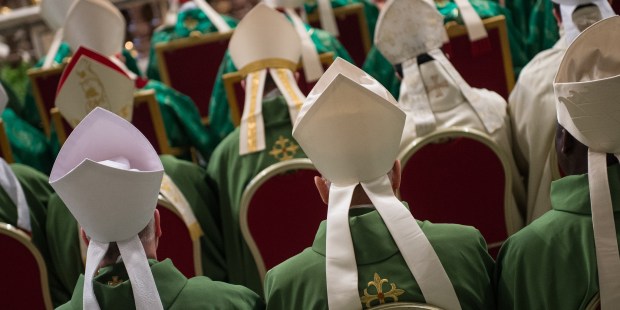 Addressed to the pope and the synod fathers, the just released “Open Letter to the Synod from over 100 Converts” calls them “to uphold Christ’s teaching on the indissolubility of marriage with the same fidelity, the same joyful and courageous witness the Catholic Church has displayed throughout her entire history.” The signers explain that the Church’s teaching on marriage and sexuality, now so widely criticized even within the Church, helped draw them to the Church, especially as she held to these truths when society began to reject them.

In the letter, sent to the Synod fathers in mid-September and just released publicly, the signers oppose proposals to loosen the Church’s discipline for the divorce and remarried, including the “way of penance” some Synod fathers have pushed. These proposals, they argue, do not address “the real crisis of the family” that underlies the problem of divorce and other problems like contraception, cohabitation, and same-sex attraction. It closes with the hope that the signers’ witness to the power of the Church’s teaching will strengthen the Synod fathers’.

Asked about the origin of the Letter, the organizer, Margaret McCarthy of the Institute for Studies in Marriage and the Family, said that she’d realized how important the question of marriage and divorce was to Christianity at its beginning. Jesus’ teaching on the indissolubility of marriage scandalized even the disciples, who said “It would be better not to marry!”

But Jesus’ teaching makes marriage an attractive “token of eternity,” she said, because it helps us meet God. The same applies to the early Christians’ desire for children and to Christianity’s high view of women and of creation, both signaling a belief and practice very different from the pagans’. “For many converts, we were attracted the Catholic Church’s steadfastness on questions concerning embodied human existence, not simply because we wanted it to be morally rigorous, but above all because this was an expression of the attractiveness of Christ, the Word made flesh.”

The letter was signed by over 130 people who’d entered the Catholic Church as adults, many while working as Protestant ministers. The signers include Oxford professor John Finnis; Alana Newman, director of the Coalition Against Reproductive Trafficking; sociologist Mark Regnerus; Jay Richards, editor of The Stream; Thrill of the Chaste author Dawn Eden; biblical scholar Scott Hahn; Elizabeth Kantor of Regnery Publishing; and Thomas Farr of the Berkley Center for Religion, Peace, and World Affairs and his colleagues Timothy and Rebekah Shaw; author David Mills; and the philosophers J. Budziszewski, Laura Garcia, and Sherif Girgis.

He and his wife had discovered the Church’s teaching about marriage while Episcopalians, said David Mills, former executive editor of First Things. “Having discovered the Church’s deep wisdom when she taught something almost everyone we knew rejected,” he said, “we saw that we had to be part of it.” The Synod needs to speak clearly to speak to people the way she spoke to him, he added.

Calling himself a “revert,” since he left the Church at fourteen, Baylor University philosopher Frank Beckwith had returned partly because he found the Church’s teaching so attractive. He’s concerned that “Although the Synod does not have the ecclesial power to change Catholic teachings on these matters, it can offer its conclusions to the world in misleading language that could serve as a catalyst to ensure that the next generation of Catholics are deprived of knowing and living the fullness of Church’s teachings.”

“If it weren’t for mercy, we’d all be lost, because the truth challenges us, pointedly so in this domain,” said another signer, University of Texas sociologist Mark Regnerus, “Truth without mercy is cruel, but mercy that ignores truth is a cruelty as well, and makes no sense at all.”

Growing up as a Presbyterian, he said, he was “pretty clueless” about the issues of marriage. Reading a short summary of St. John Paul II’s Theology of the Body “just turned on the lights for me” and left him feeling embarrassed “by my thin tradition and simplistic, individualistic thought on these matters. It really schooled me, and still does.”

The letter with the list of signatories can be found here