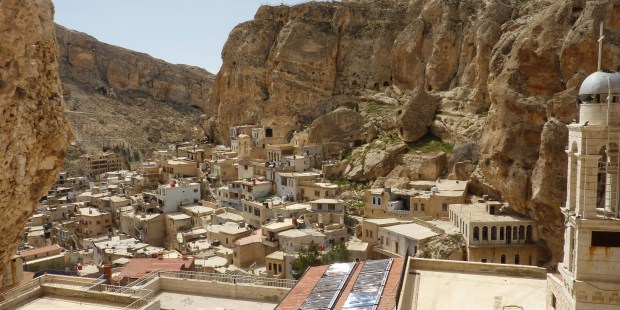 We visit to Ma’loula, where people still speak Aramaic, the language of Christ, and witness the devastation wrought by ISIS

Heading for Ma’loula. We are only a few kilometers now from the sacred city. At the edge of the motorway, huge makeshift military bases have sprung out of the ground, ready to stop the Islamic State’s military offensives. Within hours the Syrian Army’s bulldozers elevated earthen ramparts as a fortified camp to hide and heavily defend armed sentries. Our vehicle zigzags between the embankments that impinge on the road and finally reaches the entrance to the Christian city. The holy city is nestled in the cliffs of south-west Syria, a two hours’ drive from Damascus, the capital of Syria.

In 2013, Ma’loula fell twice into the hands of Al-Nusra Front fighters. The majority of the inhabitants had to leave. Among those who did not have the heart to leave their homes, five Christians paid with their lives for refusing to convert to Islam. A child shows the fury that filled the terrorists during the attack: “I was more frightened by their shouts than by the sounds of Kalashnikov fire. I shook with terror every time a jihadist shouted with all his might ‘Allahu Akbar.’” The city was freed three months later after intense fighting that left 200 Syrian Army soldiers dead. Today, the streets are safe but still bear the marks of the terrorists’ rampage.

Almost everything here was desecrated

First of all, the Orthodox monastery of St. Thecla that has overlooked Ma’loula since the fourth century. It is among these cliffs that St. Thecla died in the first century after Christ.  Legend says that Thecla was being pursued by soldiers when she came upon a mountain, and after praying, the mountain split open and let her escape through the gap (Taqla). From the threshold of the building, one can already assess the extent of the violence perpetrated against the sanctuary. The old iron entry door leans against the wall, half-burned, pierced here and there by Kalashnikov bullets. Our steps lead us to the ancient library that only a short time ago house very ancient manuscripts. Not one of them survived the fire caused by the terrorists. Climbing a ramp, we came out on the terrace where the vast chapel stands. Temporary crucifixes are fastened to the dome and bell tower, the original ones having been literally ripped off by the Al-Nusra Front fanatics upon their arrival.

The priest in charge of the place invited us to enter the narrow nave of the chapel. The scene of desolation brings tears to the eyes. Modern mosaics suffered the same indignities as the oldest frescoes. The terrorists were undiscerning and everything was burnt. Everything here has been desecrated: the statues destroyed, the icons covering the walls lacerated, the eyes of saints gouged out. Those guilty of this savagery took the time to sign their crime in graffiti near the altar: Allahu Akbar. Under the dome, the fresco of Christ remains intact and He seems unfazed by these insults and profanities. His gentle gaze conveys with it the hope of all his wounded people.