Is Pope Francis an Ambassador of Mercy or of Scandal? 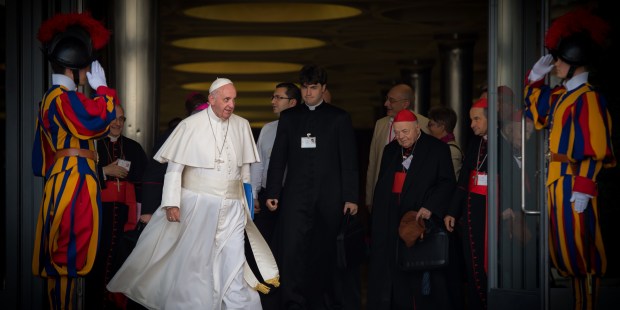 I’ll never forget the morning I was leaving church after mass and noticed an elderly woman sharply berating a younger, recently divorced woman for receiving communion. While I understand the elder was most likely acting out of a desire to protect the sacrament, the young woman was not prohibited from receiving the Eucharist simply because she had a civil divorce decree. That divorcee’ left the church quite upset and who knows if she ever came back.

As the first week of this second half of the Extraordinary Synod on the Family progresses, it’s stories like this that underscore Pope Francis’ central focus of mercy. But, it pains me to see so many Catholics finding Pope Francis’ merciful nature to be scandalous. Apparently, people are erroneously confusing “mercy” and “compassion” with condoning sinful behavior. Being merciful and compassionate translates to being concerned for the welfare of a soul, having a desire to help that soul come closer to God, and acting upon that desire. But if we only associate with other practicing Catholics then we’re not really following our calling.

In his Day 2 homily he preached that we, “his ministers,” need to be merciful and “urged the faithful not to put one’s own convictions or a list of commandments before the Lord’s mercy.” And Francis doesn’t just talk, he offers vivid examples in his everyday life through taking time to talk and listen to people in divergent situations. No one is too low or too lost for the Holy Father to pay attention to.

I recently received an email from a woman who shares her experience of being a divorced Catholic that speaks to Pope Francis’ point. Here is an excerpt:

I am a Catholic who was divorced by my husband three years ago when I became seriously ill. We had been married nearly 30 years. I lost all our mutual friends, including those who were Catholic. I stayed in the parish we had been members of thinking of it as my home. It turned out to be quite the opposite.

Unfortunately, none of my Catholic friends reached out to me and in my home diocese, there was and still is nothing in the way of emotional, psychological, or spiritual support for someone going through a divorce. I finally turned to a local Methodist Church that offered support groups for people recovering from divorce.

Although I’d served as a Eucharistic minister, a lector, participated in Bible study, sponsored two catechumens, and attended daily Mass and weekly Adoration for many years, after my divorce I was suddenly invisible, erased as it were. I was so isolated, I even experienced several cycles of suicidal loneliness despite my attempts to find new friendships in various diocesan groups. The indifference I faced left me bitter, and I finally left the parish for another to escape the temptations to anger and resentment. In effect, I was not loved but shunned. – Mary Margaret, Tulsa, OK

I Desire Mercy, Not Sacrifice

The Pope’s message to us as his ministers of mercy directly links to so many of the gospel stories. Consider the story of the prodigal son, whose father didn’t just sit around hoping his son would come to his senses. He didn’t just wistfully look out the window thinking maybe he might be there. He was standing out on the road looking for him, he was actively seeking his wayward son. What a beautiful example we can all look to for guidance in helping our brothers and sisters in Christ.

As the Synod continues, I am optimistic this theme of mercy will play out in powerful ways. Cardinal Donald Wuerl of Washington, D.C., has already stated, “So far, this has been a very positive meeting.” I encourage you to join me in reflecting on Pope Francis’ words, taking them to heart and recognizing how we can approach our wounded brothers and sisters in Christ with an “openness to the Holy Spirit as well as prayer and humility before God.”

Lisa Duffy, blogger, speaker and author of The Catholic Guide To Dating After Divorce writes from Charleston, SC. She welcomes your comments and questions at lisa@lisaduffy.com.