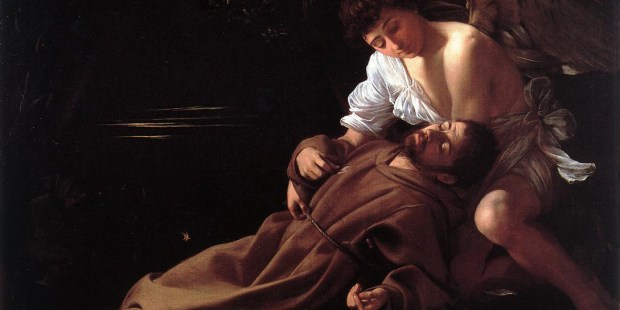 If you grew up Catholic — and even if you didn’t — you’ve almost certainly heard “The Peace Prayer” prayed or sung, a lovely set of verses attributed to St. Francis which begins like this:

Lord, make me an instrument of your peace; where there is hatred let me sow your love. Where there is injury, your pardon Lord, and where there’s doubt true faith in you…

As much as the ideas in this prayer reflect the spirit of St. Francis, there is no indication he ever wrote or said it. In fact, the search for the origins of the prayer ended up turning into a French book called “The Peace Prayer of St. Francis,” by Christian Renoux in 2001. According to a piece in St. Anthony Messenger, the first part of the prayer is similar to an 11th-century French prayer, and the oldest known copy of the current version of The Peace Prayer dates back to 1912 in France. It then gained popularity in other countries during World War I.

Then there’s the popular phrase attributed to St. Francis so often today when speaking about evangelization:

Always preach the Gospel, if necessary, use words.

Again, very Franciscan in spirit, but Francis never said it. He did say something related to it, though. Apparently in chapter XVII of his Rule of 1221, Francis told the friars not to preach unless they had received proper permission and then he added, “Let all the brothers, however, preach by their deeds.”

This is certainly not the same thing, however, as saying that we should only use words to preach when necessary.

Investigating the truth of quotes by saints who lived centuries ago isn’t something most of us take the time to do — especially when something resounds so well with the life of a particular saint.

Even Pope Francis and his staff aren’t immune to such mistakes. The Holy Father used the “… if necessary use words” quote for the first time in a homily at a Mass on Sunday, April 14, 2013 in the Basilica of St. Paul Outside the Walls, and since then it has appeared in other papal texts, such as another homily for the feast of Sts. Peter and Paul this past June 29.

Why is St. Francis credited with so many things he didn’t say? Fr. Pietro Messa, president of the Higher School of Medieval and Franciscan Studies of Rome’s Antonianum Pontifical University, says it’s just something we do:

“Throughout the course of history, some have sought to give their own thought greater authority, and make it more widely known, by attributing it to a person of great fame…” explains Messa. “Texts composed and attributed to St. Augustine, St. Ambrose of Milan, St. Bernard, and others. Given the great popularity which St. Francis enjoys today, it’s no wonder that very popular sayings and thoughts are attributed to him, as they possess the twofold characteristic of being placed in the mouth of a very prestigious person and of having the strength of being composed in the present times. Certainly the authentic writing of Francis of Assisi in which he says that a man who is unrepentant is destined for hell doesn’t hold the same attraction today.”

To counter the numerous false quotes attributed to Assisi’s best known Franciscan, Messa put together a list of 13 authentic quotes that  come straight from the saint’s writings.  (These are translated from the Italian and were originally published on Aleteia’s Italian edition.):

3) We bear fruits worthy of repentance. And we love our neighbors as ourselves. And if someone does not want to love others as himself, at least do them no harm, but do good. (FF 190)

4) Let us therefore have charity and humility and give alms, because charity washes the soul of the filth of sins. (FF 192)

5) We must also fast and abstain from vices and sins and from any excess of food and drink, and be Catholics. We must also frequently visit churches and honor and visit reverent clerics, not so much for themselves, for they are sinners, but for the office and the administration of the Most Holy Body and Blood of Christ, which they sacrifice on the altar and receive and administer to others. (FF 193)

6) Do not be angry at your brother for his sin, but admonish him and encourage him with all patience and humility. (FF 198)

7) To the body it is sweet to commit sin and bitter to serve God, for all evil things, vices, and sins issue and proceed from the heart of man, as the Lord says in the Gospel. Thus you have nothing either in this world or the other. You think you possess the vanities of this age, but you deceive yourselves. FF 204)

8) Consider and see that the day of death approaches. Therefore, I beg you with all the reverence of which I am capable, that because of the care and concerns of this world that you have, do not forget the Lord, nor deviate from His commandments. (FF 211)

9) May all of humanity stand in trepidation, the whole universe tremble, and heaven exult, when on the altar, in the hands of the priest, Christ, the Son of the living God, is present. O admirable loftiness and stupendous condescension! O sublime humility! O humble sublimity, that the Lord of the universe, God and Son of God, humbles himself to the point of hiding, for our salvation, under the humble appearance of bread! (FF 221)

10) Brothers, look at the humility of God, and open your hearts before him; humble yourselves that you may be exalted by Him. (FF 221)

11) High, glorious God, enlighten the darkness of my heart. And give me true faith, certain hope, and perfect charity. (FF 276)

12) Holy Humility confounds pride and all men that are in the world. (FF 258)