If Jesus Was Sinless, Why Did He Need to Be Baptized? 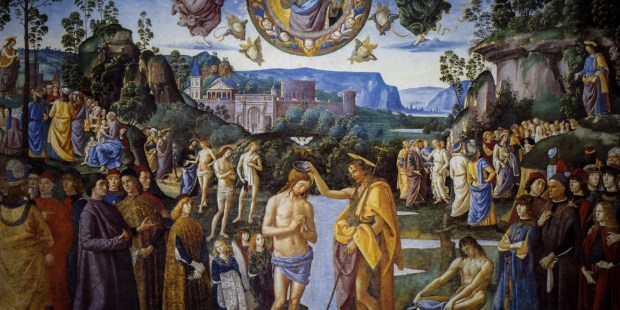 The answer is, he didn’t need to. WE needed him to do it

This Sunday, the Church will celebrate the baptism of Jesus Christ. As a CCD teacher and a parent, there are certain questions I love hearing out of the mouths of babes, and one of them always crops up this time of year: “If Jesus was sinless, why did he need to get baptized?”

It’s a great question, if for no other reason than that it proves they’ve been listening. After all, according to the Catechism, the Sacrament of Baptism does just four things: 1) forgives original sin and every other sin previously committed by the person being baptized; 2) unifies the person with Jesus in a way that makes him or her part of Jesus’ mystical body and an adopted son or daughter of God; 3) makes the person a member of the Catholic Church and 4) gives the person a personal testimony of salvation to proclaim through the world.  Since Jesus didn’t have any sins that needed forgiving (original or otherwise), was already fully himself and fully God’s son and had no need of salvation, baptism would seem redundant … and oddly timed too, since the Church as we know it wouldn’t exist for at least another three years.

In other words … nice catch, kids!

So what’s the deal? Why did Jesus insist on receiving baptism from John, even though John himself flat-out objected, arguing that it was Jesus who should baptize him?

The easy answer is that Jesus was simply setting the example for his followers. “WWJD” bracelets may be out-of-fashion and clichéd, but they do express the rather profound truth that as long as we keep our eyes on Jesus, and do what he showed us how to do in both word and deed, salvation can be ours.

But there’s more to it than that. The history of Christ is like an onion — layers and layers of truth that can be peeled away to reveal even deeper truth within. And when we peel away the surface explanation that Christ was simply setting a good example, we see that the event was so much more than just a how-to for his future followers.

For one thing, the baptism Jesus received from John wasn’t the same sacrament we celebrate today. How could it have been? Jesus had not yet established his Church, so the sacraments didn’t exist yet. The “baptisms” John performed were actually ritual washings (mikveh/pl. mikvaot) given to converting and reverting Jews, symbolizing the death of one’s old, sinful self, and rebirth as a ritually clean Jew.

Mikvaot were commonly performed to cleanse Jews of any sins and ritual impurities before presenting themselves at the temple, but John’s “baptism” mikvaot were especially intense — more like a refiner’s fire than a quick dip in the bathtub. He had been traveling all over the land, urging people to receive baptism to prepare themselves for Jesus’ coming. When Jesus arrived and requested the cleansing ritual for himself, John was taken aback. He almost refused to do it, knowing Jesus was pure and sinless. But when Jesus insisted, John caved, and another piece of the puzzle was revealed — by undergoing baptism, Jesus fulfilled a centuries-old prophecy regarding the coming of the Jewish messiah as St. Matthew describes in his gospel account:

After being baptized, Jesus came up immediately from the water; and behold, the heavens were opened, and he saw the Spirit of God descending as a dove and lighting on him, and behold, a voice out of the heavens said, “This is my beloved Son, in whom I am well pleased.” (Matt. 3:16-17).

As if that wasn’t a clear enough heavenly endorsement all on its own, contrast it with this prophecy about the coming Savior:

Jesus’ baptism set an example and fulfilled a prophecy, but there was another layer too. This one came with a strange twist: For Jesus, baptism worked in reverse.

When you and I were baptized, with the holy water – a blessed sacramental — we were sacramentally cleansed of our sins. But when Jesus entered the perfectly normal waters of the Jordan River, he made them holy by his very presence and touch. And since he didn’t have any sins to cleanse, the baptism instead took on a different meaning entirely — a sign of his decision to put himself on our level and claim our sins as his own. For Jesus, the ritual that represented new birth for so many others instead foreshadowed his death and descent into hell, as he took the punishment for the very sins we now look to baptism to forgive.  Our “rebirth” mirrors his resurrection — his ultimate triumph over death and evil on our behalf.