Layman: What I Learned From Washing Feet 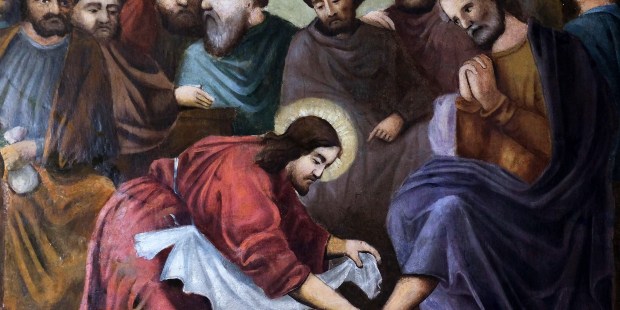 Service could use all the prestige it can get. As things stand, it’s too often mistaken for servility

“Pardon me. I’m pretty sure I washed your feet, but I never did get your name.”

Several years ago I introduced myself thusly to a woman I found myself working alongside at a house of hospitality. With a look of alarm, she denied everything, and a man who turned out to be her fiancé sprang up from behind the dishwasher to throw a protective arm around her. He and I stood our ground, mad-dogging each other for a few tense seconds until we recalled our reason for being there. Then, following a ritual exchange of pacifying harrumphs, we got back to work.

When Pope Francis announced that, going forward, priests would be allowed to select women as well as men to have their feet washed on Holy Thursday, he was ratifying a practice already common in many American parishes. But I wonder how many of those parishes observed the end of Lent like mine used to. We took turns washing each other’s feet. In front of the sanctuary, a number of chairs were set up, each behind its own basin of water. After the pastor sprinkled and dried the paws of each chair’s initial occupant, he retired from the stage, and each washee sprang up, seized the washcloth and attended to the feet of whoever filled the chair after him.

Of course, I am using the pronoun “him” for convenience’ sake. Everyone — men, women and children — was encouraged to be washed and to wash. The number and variety of participants turned it into a such a spectacle as Busby Berkeley could scarcely have devised. Making the pivot from one role to the other required more presence of mind than most laypeople are used to employing in the course of a typical Mass. On my first try, which took place during my final days as a catechumen, I remained seated in the chair, grabbed one of the feet entrusted to me, and pulled its owner — a 10-year-old boy — closer, for convenience’ sake. Before he could lose his balance and sustain a life-altering spinal injury, his father caught him and explained, gently, that I might find my job easier with my client seated.

Plenty of Catholics would find this farming-out of foot washing at best louche, if not an outright insult to the sacramental priesthood. But they say you never get a second chance to make a first impression, and taking part impressed me indelibly that the universal call to holiness has practical consequences in a universal call to service. Very few of us are called to celebrate Mass or hear confession, and even fewer to preside over a diocese, but all of us are called to do something, at some time, to proclaim the Gospel, with or without words.

It’s not that I’d see Christianity reduced to an endless round of busy bee-ism, with people competing to see how quickly they can martyr themselves for their neighbors’ sake. But service could use all the prestige it can get. As things stand, it’s too often mistaken for servility.

Not long ago in The Federalist, Tom Nichols complained that the clerks at his local drug store never bothered thanking him for his patronage; indeed, they barely acknowledged him when he thanked them for their service. Nichols concludes that, even beyond the low wages and other practical drawbacks to working dead-end jobs, the clerks resented having to wait on others. In their eyes, serving was a sign of their social insignificance relative the customers.

Nichols’ silent, sullen counterpeople are all young — Millennials, he calls them, a familiar target for conservative pundits. Generally, adult Catholics don’t think anything like them.  And yet there persists in certain quarters a habit of seeing the sacramental priesthood chiefly as the seat of ecclesial power. Built into this view in some cases is an envy of that power as well as the ambition — a sin, according to Thomas Aquinas — to usurp or claim it.  Pope Francis alluded to this clergy-envy when he called for a renewal that “seeks not to clericalize nor to be clericalized.”

Of course, Pope Francis has not prescribed foot-washing free-for-alls like the kind my parish held in the past. (Indeed, my own parish hasn’t held one in years.) Still, even allowing women to receive the service reiterates the fact that it is a service. Rather than an office for laypeople to envy, the priesthood comes off as one they might, in its less glamorous aspects, emulate. This is more or less what the fiancé and I were trying to do when we refrained from coming to blows over the scraps of franks and beans with which we’d fed the people of God.

Max Lindenman is a freelance writer based in Phoenix. He blogs at Diary of a Wimpy Catholic.