Julia Greeley: The Eyes Pull You in, says Icon writer 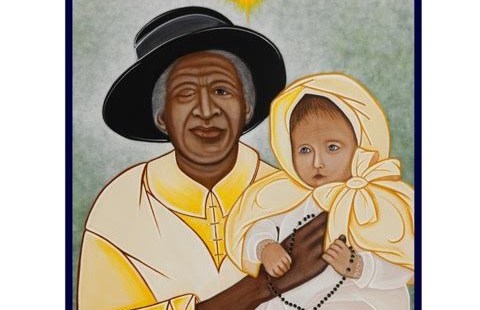 Iconographer Vivian Imbruglia, who was commissioned to create an icon for the Year of Mercy, talks to Will Duquette about her vocation

Miss Julia Greeley appears as she did in life: floppy black hat on her head, a small smile on her lips, a child in her arms, the Colorado Rockies rising up behind her. But this is no ordinary portrait; this is an icon, commissioned by the Archdiocese of Denver as a local symbol of the pope’s Year of Mercy, and its purpose is to show Miss Julia as she stands in the light of God.

Over her head, the love of Christ shines forth in shades of bright yellow and white from the Sacred Heart of Jesus, which was her constant devotion. The same love shines forth from her own heart, as symbolized by the yellow and white of her garment. In her arms she holds a child, Mary-like, and a rosary. At her waist, a crest displays further symbols of her devotion and service: the daily Eucharist she called her “breakfast”; a firefighter’s helmet and tools symbolizing her personal mission to Denver’s firemen; the red wagon she used to bring food to those poorer than herself, as poor as she was.

Miss Julia’s icon was written by iconographer Vivian Imbruglia. I recently had the pleasure of meeting Imbruglia at her studio and hearing about her work and how she came to be an iconographer. She is a joyful woman, bubbling over with laughter and words and the passion she has for her craft, and her story is a story of prayer, of vocation, of humility, and of the blessings that come from following where Christ leads.

Imbruglia has written almost 90 icons since she began in 2005. Two, St. Francis and St. Peter Favre, are in the Vatican; others hang in homes, churches, schools and other sacred spaces all over the United States. An icon of a single figure may take her three to four weeks, while icons with many figures might take as long as two months. Each one begins with research.

When Imbruglia was commissioned to write an icon of St. Peter Favre, she said, “I didn’t know anything about him, nothing. So first I’ll start to research — not just history, prayer, anything I can get a hold of.” The process is shot through with prayer. “After I’ve sketched out a drawing, I like to take the drawing with me to Adoration. In the case of Merciful Like the Father, and then the large icon I did for the Year of Consecrated Life — those were hugely important icons — I took those drawings and lay them right there, right in front of the Blessed Sacrament, and just prayed that he would guide my hands during this process.”

She uses traditional materials. Each icon is painted on a piece of wood, usually birch or poplar, which has been specially prepared. “I don’t prepare my own wood; it’s an art in itself.” First a sheet of linen is laid down on the surface. It represents Christ’s shroud on the wood of the cross, or the cloth on the altar. The linen is covered with 10 layers of marble gesso, providing an almost glassy white finish. “It’s just like glass, this part right here if you feel it; it’s beautiful. I mean if you work on it, it’s beautiful.”

Then she draws the image onto the wood, and prepares to paint.

“Before I actually begin to put my paint on to the board, there’s an iconographer’s prayer. It’s a beautiful prayer, and part of it says, ‘Guide the hands of your unworthy servant, so that I may worthily and perfectly portray your icon.'”

She begins with the face. “It’s not like you pull out some skin color: ‘I’ll get the peach color and start painting the face.’ What you do is start off with green, because green represents life. So we’re going to put life into the icon.”

She shows me her current work in progress, a central figure surrounded by crowds of saints. “A day or two ago, all those faces there were green. You would have come in and seen all these green faces, but it’s beautiful because we’re putting life into them, life; and then I start with the white highlights, and the white highlights are bringing the Light of Christ in.”

Eventually the rest of the figure is filled in, and gold leaf is applied to the halo and the saint’s surroundings. The gold leaf signifies heaven, which is why there is no gold in the icon of Miss Julia. When Imbruglia was asked to write Julia’s image, she said, “I’m going to do it in the same fashion as an icon with prayer and all the symbolism but she will not have a halo, because I’m not going to canonize her. So she doesn’t have a halo, there’s no gold leafing anywhere there. But we will still write her as a holy person.”

The work does not always run smoothly, which calls for additional prayer. She had particular difficulties with her icon of St. Vincent de Paul, which was commissioned by the saint’s namesake church in Houston for their 75th anniversary. “Vincent looked great; the children looked great. But for the background I had this big idea, this grand background and it wasn’t coming out.”

She found the devotion to Our Lady Undoer of Knots. “I just started praying that [prayer] while I was working, and she undid the big nasty knot. Because it was bad, it would not have been okay to be in the church.” After prayer and reflection, she realized she had lost her focus on the saint. “I was concentrating on this background being elaborate, so it was the first time I’ve ever done this, I sanded it down all the way around him, and I ended up just gold-leafing with this beautiful brocade behind it and I gold-leafed the border and it was like, when I was brushing the gold away and it was flying everywhere, it was like … he’s in heaven. And this is the way it’s supposed to be.”

The eyes are a critical part of any icon. “I spend a tremendous amount of time on eyes. Much prayer goes into the eyes if they are going to draw you in. That’s my first and foremost prayer in writing icons, is that those eyes are going to pull you or whoever needs to be drawn in.” Consequently, Miss Julia was a particular challenge: She had only one good eye, and in the only photograph of her it is hidden in the shade of her hat. Imbruglia kept the photo by her as she worked, and enlisted Miss Julia herself to her aid. “It was like, ‘Okay, Julia, help me with this,’ you know, I’d call upon her to call upon the Holy Spirit that this eye, eye as in the only one, ‘is going to draw people to want to come and know you more and love you more and to use you as an example.'”

I ask if Imbruglia often feels a strong connection to the subjects of her icons. “Most of the time,” she says, “but there are some instances when it is so incredibly strong it’s overwhelming.” One such case was her icon of Venerable Mother Luisita, written for the Carmelite Sisters of the Most Sacred Heart of Los Angeles. “When I was done I put the image up there, and I sat right here — in iconography, you’re the first one that venerates [the icon] before you give it away. So I had this moment with Mother, just her and me, and then I stood there and looked at her, and I just literally cried.”

The process of writing an icon is one of humility, of listening for the guidance of the Holy Spirit; and fittingly, Imbruglia’s vocation as an iconographer began in a moment of filial obedience. “My mother called me and said, ‘I want to take up this art class, but I don’t drive at night, so can you take me?’ And it was like, ugh, but you know, I thought I need to spend time with my mother. I’m being honest, and she’s heard this story, but I need to spend time, and this will guarantee that every Tuesday night I’ll spend an evening with her. I’ll pick her up, we’ll drive there, we’ll have class, and we’ll come home, and I’ll feel good as a daughter about doing this.”

The class was an icon class. “I didn’t know what it was, not knowing they were really prayers, but looking at it as art I thought, I love this form, I’ve always loved it. It was like this switch came on, nothing else mattered in the art world, this was what I was going to do. So I went and bought every book, everything I could get my hands on, every piece, every art supply, everything I thought I was going to need.”

For her mother and the others in the class, it was a social hour, but, she said, “I sat on this separate table by myself. I probably looked very unsociable, but I just couldn’t stop. I would go home and work more, and I’d go back, and I was finishing icons like this [snaps fingers] because I was consumed with them.”

Later she attended other courses, including one led by Catholic iconographer Marek Czarnecki. After that, she had to teach herself. And then her original teacher quit teaching. “Some of the ladies from class said, ‘Can you continue to teach us?’ And I said, ‘I can’t teach you,’ and she said, ‘Yeah you can.’ So I still teach. I’ve been teaching the class for a while.”

I asked if Imbruglia considers writing icons a vocation. “Oh, yes, yes, yes. Absolutely.” The watershed moment came in 2009 when she got her first commission. She was working at a private school and was planning to start a business selling personalized dog accessories. She had already created a website for the new business.

When the commission came in, she asked her co-workers, “I don’t know what I should do; maybe this is what I’m being called to do. What do you guys think?” She said, “And the principle, the vice principle and the dean of students all looked at me and they went, ‘No, do your dog stuff. You’ll make more money.'” Instead she went home and deleted the website. Two years later, she quit her job to concentrate on writing icons full time.

Imbruglia said, “I said, well, for the church, and he goes, ‘No. Why.’ And I said, well, for him. He said, ‘Say that again.’ I said for Him, and he goes, ‘Ad majorem dei gloriam, for the greater glory of God.’ And I went, yes! So from that point on, every icon that I write has AMDG hidden in it. Not big, not little; you gotta search for it. And that always reminds me that it’s always for his greater glory. Not mine, but for his.”

Will Duquette is a Lay Dominican, software engineer, prolific reader and father of four.  He blogs at Cry Woof and Let Slip the Dogs of Whimsy.