A Radical’s 5 Warnings for Public Catholics 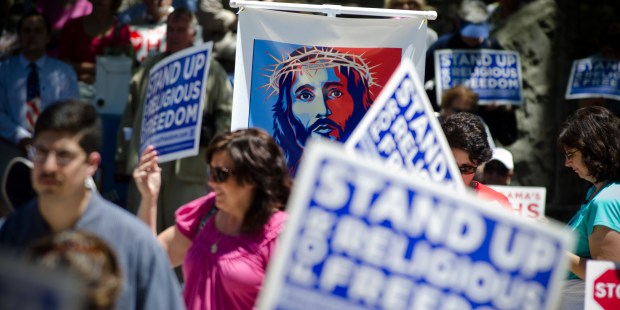 No matter who wins the elections, worldly resistance to Catholicism will likely grow, so be prepared

Whoever wins the presidency this fall, the public life of Catholicism is likely to get harder. The choice matters a lot, but it will not save the Church from the mistreatment Jesus warned us about because we will continue to be a sign of contradiction to the world.

If I’m right, then Catholics should consider the advice of people experienced in the life of dissent and resistance. Todd Gitlin was one of the founders of the Students for a Democratic Society in the early sixties and early leaders of the anti-war movement, and is now a professor at Columbia. He described his experience in the book Letters to a Young Activist, and we can learn something from his experience, even if we need to translate it into Catholic terms.

Gitlin is by no means a religious believer, but he is a reflective and morally serious man. He’s in that odd position of having firm and even absolute moral commitments, commitments to which he’s given his life, that he cannot ground in any objective understanding of the world. He would save himself some problems and would see deeper into the role of the dissenter were he a Catholic, but he still tells Catholics much that is useful about the life of public resistance.

Here are a few warnings gleaned from Letters to a Young Activist. He also has more positive lessons, but unfortunately, he didn’t put those nearly so pithily.

First, avoid rage even though it feels good. Gitlin doesn’t mean a proper response to evil but the kind of controlling, driving anger that activists can feel against those they’ve identified as the bad guys. He explains: “I know from experience that something happens to anger when it gets down inside you and stagnates. It congeals into rage, more diffuse and less manageable than anger. … Roughly, anger has an address, rage is broadcast. Anger wants change while rage demands, above all, punishment.”

Later, he warns against rage because it drives others away. “You want to change minds, so you don’t burn bridges. Burning bridges is the route of the fundamentalist who prefers the world purified but embattled, each pain a pleasure, each Antichrist a confirmation of Christ.”

Second, do not be a contrarian. People who find themselves opposed on principle to their society will feel the desire to just say no. You must be “countercyclical,” Gitlin says, meaning that you move in the opposite direction of the world, move against the flow. But don’t do it “in the persnickety sense of the contrarian, who predictably follows orders but in reverse: He is enslaved to no, rebelling for the sake of rebellion. Contrarianism is a perverse submission to power. It refuses initiative.”

Third, avoid self-enclosure, and remain engaged with those you disagree with. Again, he speaks from his observation of the political radicals of the sixties. “Persevere, but don’t bury yourself in an army of the right-minded,” he says. “Beware the perilous rapture of shrinking your world to the tribe of the saved, the cheerleading good guys who brandish the same slogans, curse the same enemies, thrill to the same saints.”

He explains what happens when you bury yourself: “When you live in an echo chamber where your cheers boom and cheerleading substitutes for thought, you enclose yourself in a sect, though you may call it a movement. The world of the saved substitutes for the world as it is, full of the unsaved.” It’s the unsaved that dissenters of every sort need to influence, and they’re also the people dissenters tend to forget.

Fourth, don’t get discouraged, even though you will always be a minority. He learned this from his own experience. “For most of the sixties,” he writes, “the political side was not so fashionable.” The Vietnam War he and his peers opposed was popular and stayed popular for years, especially (unexpectedly) on college campuses.

In the end, however, the protesters won and their view of Vietnam and of American power continues to influence the public debate. They were the nerds, the weirdos, the wonks, reading and writing and protesting when the great majority of their peers felt at home in the world and had a good time. Yet they formed the world we now live in.

Fifth, don’t be optimistic. “Optimism is balm,” Gitlin writes. “Certitude, not agnosticism, makes the blood race — not least in America, which cherishes a victory culture.” The feeling “will work on you like a drug.” The radicals of the sixties, he says, failed because they kept misreading the world around them and overestimating their chances of success. Their optimism made them excuse every left-wing tyrant as long as he’s anti-American, for example, because they could convince themselves that the tyrant represented the liberated future.

“If you believe such things,” he writes his young activist, “you are riding for a fall — not only a moral fall but a practical one, for your cannot possibly win more than a smidgen of popular support for positions that defy common sense. … Please go on leaving the victory marches and the catch tunes to the tinny bands. The long-distance runner listens to the blues.”

Gitlin writes, starkly, “Living with the knowledge that our country perpetuates moral abominations is an everyday burden.” He’s talking about the Vietnam War, but we will think of abortion, experimentation on embryos, euthanasia, the suffering. It’ll be a long struggle, and people like Gitlin, whatever our disagreements, tell us something useful about the struggle. The long-distance runner listens to the blues, but also, the Catholic would add, Mozart.