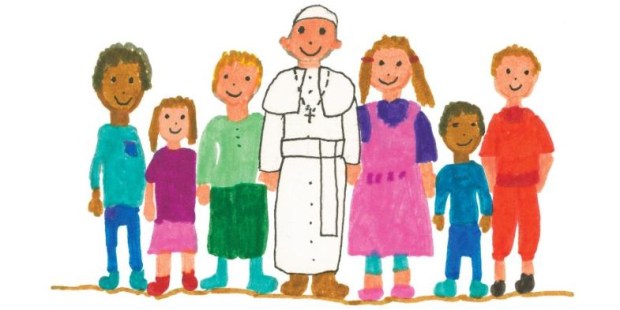 In “Dear Pope Francis” , the Holy Father answers letters to children from around the world

It was my son’s fourth birthday when the white smoke came billowing out of the Sistine Chapel and Cardinal Jean-Louis Tauran stepped to the balcony to announce to us the name Jorge Mario Bergoglio.

The name didn’t bring a face to my mind, but I knew perfectly who he was because he’d attracted international Catholic media attention through his defense of marriage in Argentina.

It took a long time before we finally got to see him; he came from behind the rich, red curtains and paused for long moments as the shadowed Plaza erupted in cheers and camera flashes. Then his first words as pope: dear brothers and sisters, good evening.

Now my son is turning seven, and we’ve all been learning from this pope, our first Francis, for three years. He’s gotten the Church’s attention — and not only ours — in remarkable ways.

I haven’t yet had the chance to be at an audience with him, or to see him up close, but even so I am repeatedly confirmed in my sense — the same impression he gave us from the balcony with his simple “good evening” — that the best way to learn from this pope is to be with him. In the same way that meeting a friend for coffee tells us so much more than checking her Facebook, “being with” Pope Francis is much better than reading a mere headline or someone’s commentary on what (they say) he’s said.

Of course we can’t really be with him, physically in the same room, but we have endless opportunities to be with him through what he says and how he says it — to read the whole speech, to listen to the entire Q&A, to watch the full video, to note where he leaves his text to go off the cuff. His way of being — his jokes, his inflections, his smile — are part of the message, and so observing the whole can give us the best sense of who is this man chosen by God to lead us.

As I read Dear Pope Francis with my seven-year-old, it struck me that this children’s book is another opportunity to be with this man who is Peter. He is delightfully present in his answers to the collection of letters written him by children across the world.

The book took shape during a 90-minute session with his fellow Jesuit, the editor Antonio Spadaro. In the afterword Fr. Spadaro takes us into the room with him and the pope, where Francis is leafing through the questions and their accompanying drawings, and declares, “these are tough.”

“I see that from time to time,” Fr. Spadaro recalls, “he looks off into space and answers a child whom he tries to imagine. He answers, not looking at me, but looking at the hypothetical image of Ryan, João, Nastya, Emil, Tom, Ivan …”

“Pope Francis looks at the drawings,” Father Spadaro continues. “I note that, at times, the pope captures, with his spiritual finesse, the meaning of a question more from the images than from the words.”

Just as the pope seemed to be with the children who had written him, so we readers are with the pope as he answers. The questions are tough, and the answers — while simple enough for my seven-year-old — contain a wealth of catechesis, taught with the simplicity of that man who told us from the balcony, “Good evening.”

He tells eight-year-old Natasha from Kenya how she can imagine Jesus walking on the water: “God cannot sink, you know!”

Ryan from Canada hears about what God was doing before he created the world. And Josephine from the U.K. learns that the pope prays when he goes to the dentist.

Six-year-old Prajila from Albania asks if the pope liked to dance when he was a child. It’s easy to imagine his face and voice when he answers right away, “Really a lot!” and adds that he enjoyed Ring Around the Rosie as a boy, and then the tango as a youth. The answer becomes a lesson as the pope references King David and warns against living a life without joy.