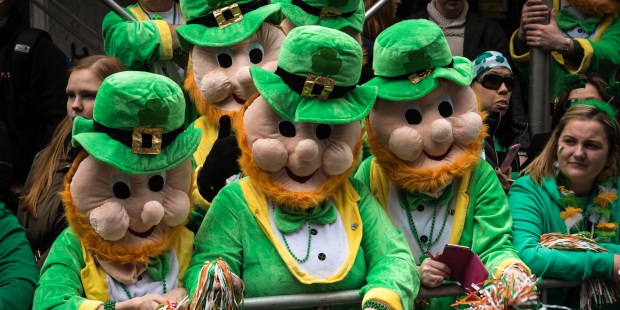 You don’t need green beer to have a good time …

St. Paddy’s Day is almost here, and Irish bars all over the world are preparing for a profitable night. Meanwhile, police officers and emergency workers are getting ready to pull grueling overtime as they deal with pub brawls, DUIs, alcohol-influenced injuries, drunken emotional displays, public indecency and gutters overflowing with all manner of human waste in an effort to minimize the fallout.

St. Patrick’s Day and drunken debauchery did not always go hand-in-hand, as they seem to today. The holiday began as a simple Catholic feastday celebrating the patron saint of Ireland. Over time, the feast day was co-opted by secular culture and turned into a celebration of the worst of Irish stereotypes — the feisty drunken brawler who is always up for another round at the pub and won’t stop until he passes out, starts seeing Leprechauns or gets thrown in the drunk tank to dry out before returning to polite society.

Now, don’t get me wrong, I’m no prohibitionist. I’m all for raising a celebratory pint or two in honor of St. Patrick if you want to. But like most adults with kids, I’ve grown out of the binge drinking and reckless behavior that taint almost every public celebration of St. Patrick’s Day. This year, I’ll be joining the ranks of the loneliest club there is — the one that celebrates the feastday stone cold sober.

But celebrate I will. Far be it from me as a Catholic to turn down a church-sanctioned excuse to party during Lent. After a long, gray winter and several weeks of Lenten penance, I’m as ready to blow off some steam as the next girl. So here are a few ways we teetotalers can celebrate St. Paddy’s feast day … all totally alcohol-free.

As he brought new faith to Ireland
so may he bring out in you
a touch of Irish kindness
in everything you do.
And through the good St. Patrick
may your home and life be blessed
with all the special favors
that make you happiest.

—St. Patrick’s Day blessing, adapted from a blessing by the Norbertine Fathers