“Ecumenism of Blood” Helping to Put Old Rivalries to Rest in Jerusalem? 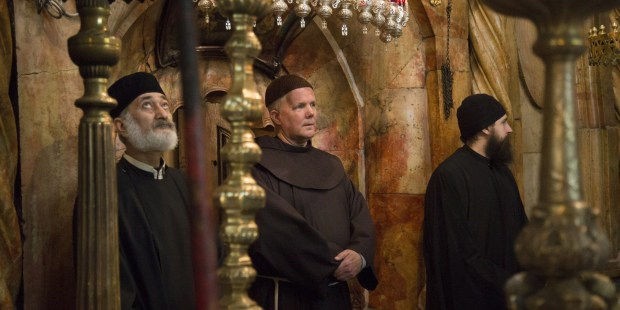 ©Emmanuele Contini / NurPhoto
Clergymen of different confessions are pictured during the Easter Sunday mass in front of the entrance of the Aedicula in the Church of the Holy Sepulchre in the Old City of Jerusalem, Israel on March 27, 2016. (Photo by Emmanuele Contini/NurPhoto)
Share
Print
John Burger - published on 04/01/16

In spite of all the alleluias of the Easter season, it may surprise some readers that the place where Christ died and rose from the dead is cared for by three major religions working next to one another in a sometimes very tense atmosphere.

As late as eight years ago, an argument between Armenian and Greek monks at Jerusalem’s Church of the Holy Sepulcher led to a brawl, requiring the intervention of Israeli riot police.

The source of much of the tensions comes from a hypersensitivity to territory among the Greek Orthodox, Armenian Apostolic and Roman Catholic custodians of the historic church. Each community operates in different sections of the Holy Sepulcher, according to an 1853 decree issued under the then-Ottoman rulers, known as the Status Quo. As Mark L. Movsesian, co-director of the Tradition Project at the St. John’s Center for Law and Religion, noted in First Things:

The Status Quo governs the relationship among the communities in minute detail: which can use which altars at which times, how many lamps each community is allowed, and so on. Relations are often fractious. Because, under the Status Quo, maintaining or paying for repairs of a structure asserts ownership, each community has an incentive to prevent others from undertaking renovation projects. Needed repairs are often delayed until the situation becomes truly dire — as in the case with the Edicule [a 19th-century structure that encompasses the Tomb of Christ], which has been held together by scaffolding since the 1940s.

Things are changing. Movsesian speculates that the dire emergency facing Christians of the Middle East, in which Islamists are targeting Christians without regard to denomination, is part of the reason the three principal Christian communities that maintain the Church of the Holy Sepulcher have come together to finally address the need to repair the Edicule.

At a joint news conference, the leaders of the Greek Orthodox, Armenian Apostolic, and Roman Catholic communities announced that work on the structure, built a little more than 200 years ago, will start right after Orthodox Easter in May and last several months. The three communities will share the costs — about three million euros — and each appoint architects to help with the project. Pilgrims will continue to have access to the site while renovations are underway.

“The new situation reflects in part what Pope Francis has called the ‘ecumenism of blood,'” says Movsesian. “The persecution of Mideast Christians does not respect confessional boundaries. When ISIS is slaughtering your people, disputes about lamps do not seem so vital.”

The Facebook page of the Armenian Patriarchate of Jerusalem, which represents the Armenian Apostolic Church, announced that on March 22, they, the Greek Patriarch, and the Catholic Custos of the Holy Land, announced the start of the restoration of the Edicule. “A common technical bureau will supervise the restoration, in which the Greek Orthodox Church, the Armenian Orthodox Church and the Custodia each have their representing architect,” the announcement said.

It is estimated that the restoration will take eight to twelve months.

With this development, the words of the Easter Message of the Heads of Churches of Jerusalem may take on added meaning: “The empty tomb here in Jerusalem is the embodiment of divine hope for all creation.”