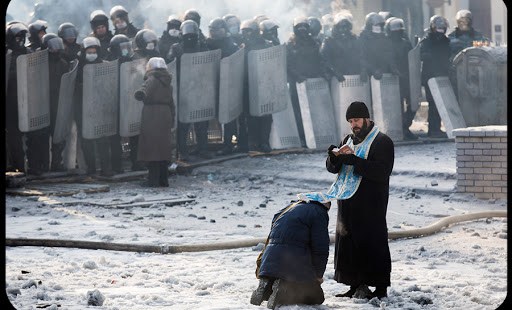 VATICAN CITY — The Vatican Secretary of State has notified the heads of bishops’ conferences that a collection will be held this Sunday to raise money for a “special humanitarian initiative” for Ukraine.

In a letter sent by Vatican Secretary of State, Cardinal Pietro Parolin, to the presidents of the Bishops’ Conferences of Europe, the cardinal has announced that “a special humanitarian initiative will be implemented by means of a collection to be held throughout Europe on Sunday, 24 April.”

The proceeds of this collection, he said, “will be joined to a substantial offering to be made by His Holiness as a sign of his own participation in this collection.”

In the Donbas area of Eastern Ukraine, there has been rocket fire almost continually for nearly two years. There have been hot battles, tank battles, with officially approximately 10,000 people killed. Tens of thousands have been injured and maimed, with homes and health centers damaged or destroyed.

At the end of Holy Mass on the Jubilee of Divine Mercy Sunday, April 3, Pope Francis appealed for peace in Ukraine, announcing his wish that a special collection be taken up in all Catholic churches in Europe on Sunday, April 24, to help alleviate the suffering of the people of Ukraine, and as a sign of his solidarity and that of the whole Church.

Again, at this week’s Wednesday general audience, the pope launched a second appeal, saying that the long-suffering people of Ukraine risk being “forgotten.”

Cardinal Parolin stated in his letter to bishops conferences, obtained by Aleteia on Wednesday, that the collection will be used “for the benefit of those living in conflict zones and those displaced within the country.”

“In order to ensure that this aid is effective and properly managed,” Cardinal Parolin said, “the Holy See will organize specific projects for the most urgent humanitarian emergencies.”

He added: “These projects will be examined in loco by a special Commission, while the Pontifical Council Cor Unum will approve and evaluate the management of these funds,” and will be subject to necessary financial accountability.

Cor Unum (“One Heart”) was established by Pope Paul VI in July, 1971. Its mission to to express “the care of the Catholic Church for the needy, thereby encouraging human fellowship and making manifest the charity of Christ” (Apostolic Constitution Pastor bonus, art. 145).

Cardinal Parolin further specified that “funds raised by this collection can be sent by the bishop’s conferences to the Secretariat of State, Section for General Affairs, through the Apostolic Nunciatures.” The cardinal asked that the offerings be sent “as soon as possible, given the extraordinary and pressing nature of this initiative.”

Attached to the letter, the Vatican Secretary of State included additional information regarding the humanitarian crisis, specifying the greatest needs.

“In the area most affected by the war, the greatest need is for health care,” the enclosure read. “Over 120 health centers have been damaged or destroyed. Pregnant women and those in childbirth are particularly at risk, and the potential for the spread of AIDS and tuberculosis is high. There is a lack of anesthesia, leading to operations often being performed without it. Where medicines are still available (many pharmacies have been closed), they have become to expensive to purchase.”

Regarding housing, that attachment stated that “from 12,000 to 15,000 homes have been damaged and more than 1,000 completely destroyed. The situation will be particularly dire during autumn and winter due to severe weather.”

Children have been among the most seriously affected. The information provided to bishops indicated that many children are unable to attend school. “Two hundred thousand have found safe haven in regions of Ukraine outside conflict areas: one out of four, therefore, is displaced. Many are affected by serious psychological traumas caused by the violence they have witnessed and themselves experienced: some have even lost the ability to read and write.”

Ukrainian priest, Fr. Vladimiro Voloshyn, pastoral coordinator of the Italian Bishops Conference for Ukrainians in Italy, told Vatican Radio on Wednesday that “many children have been left without parents, because they have been killed or are missing.”

“The Pope has become the voice of all Ukrainians not only in Italy, but across the world,” Fr. Voloshyn said. However, he added: “The deep desire of the Holy Father is not only to collect the offerings and help the poor, but to draw the world’s attention to what is happening in Ukraine, about which so few people are talking.”

Read the letter in English here: Letter from Vatican Secretary of State Regarding Ukraine