How Churchgoers Turn Against God 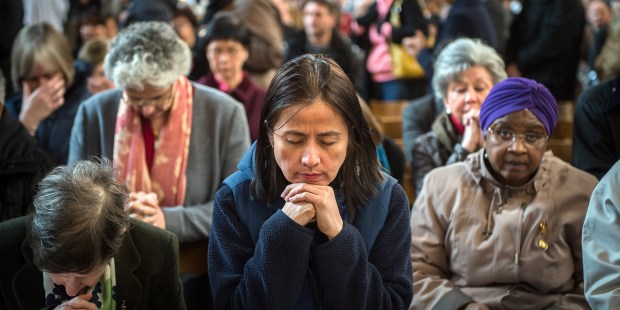 Which “worldly heart” do you have?

The Christianity Today headline summed up the story this way: “Going to church does not make you a good person, says Pope Francis.”

It quoted a March homily from the pope about the parable of the rich man and Lazarus. “With a worldly heart you can go to church, you can pray, you can do many things,” Pope Francis said. “But if your heart is worldly you cannot understand the needs and hardships of others.”

This is a problem near to my own very worldly heart. Francis helpfully traces the descent of the religious but worldly heart into soul-destroying selfishness.

First, we forget our place in the community.

“Maybe he was a religious man, in his own way,” the pope said of the rich man. “Maybe he prayed, and a couple times a year he surely went up to the temple to offer sacrifices, and he gave big donations to the priests, who in their clerical cowardice would thank him and give him a seat of honor.”

It’s an easy mistake to make. Human beings are hardwired to want to impress others. You can learn that from the Greeks (“Man is a political animal”) or from modern neuroscientists such as Michael Gazzaniga, who say it is impossible to understand human consciousness apart from his interaction with others.

We exist with and for others, not just in and for ourselves. The point of the spiritual life is to direct that community-spirit outward; to imitate God’s self-gift for others. We make the mistake of directing it inward, by looking for the approval and praise of others.

Second, we forget our limitations.

As a result of this fundamental ego shift, the rich man lost sight of his place in the world. “The eyes of his soul were certainly tinted so as not to see” the poor man at his door, said Pope Francis.

As a father of nine children, I have often seen these “eyes tinted so as not to see.”

The phrase fits the glazed look in a nine-year-old’s eye when you describe how she should be accomplishing a task and you realize, “She isn’t listening. She thinks she knows exactly what she needs to do. And she is wrong.” It also fits the eyes of a teenager who looks past you as you are describing a life lesson (or a Church doctrine) and you can tell the teen just knows that he or she knows better than you (or better than two millennia of Church teaching).

We can all be that way with the Church. The priest (or the Gospel) tells us again and again that our faith must focus on alleviating poverty (or one of the other sins that cries out to heaven but that we tolerate). We smile smugly and think, “Silly Church. I know better.”

Third: We start trusting in ourselves instead of God.

“There is a curse on the person who trusts in the world and a blessing on the one who trusts in the Lord. The rich man’s soul is a desert and an inhabitable wasteland,” Francis said, adding that worldly people “are alone with their selfishness.”

And thus a churchgoer becomes cursed rather than blessed: By degrees we change the role of God in our life. He becomes the audience for whom we perform religious acts, rather than the source and partner of an integrated life of doing his will.

Our goal changes from pleasing him to impressing him. Our measuring stick becomes “feeling holy” rather than “conforming to God’s will.”

This attitude can coexist with daily Mass and rosary, a weekly Holy Hour and a robust schedule of novenas without ever changing our heart. But often not for long. Soon we will be white-knuckling our way through it all and then we will give it all up in frustration.

Whenever we try to simultaneously please our pride and please God, our pride smothers our faith. This is why it is the devil’s favorite sin.

How to fight back?

Pope Francis’s answer is simple: “We have a Father who waits for us. In the midst of our worldliness, he calls us his children. We are not orphans,” he said.

We should stop trying to impress God and instead admit defeat and seek his help.

Stop thinking of God as a peer and start thinking of him as a master. If you took basketball lessons from Kobe Bryant or acting lessons from Meryl Streep, you would shut up and listen. Treat the Church that way too.

In short, stop thinking of your religious acts as mirrors that put you in focus; start seeing them as windows to see outside yourself.