Catherine of Siena: Doctor of the Church and Unforgettable Fire 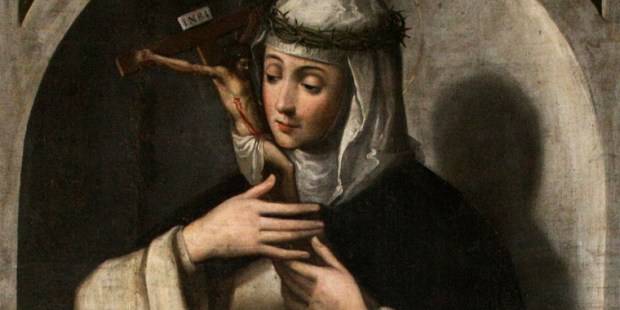 A woman wielding power, influence and wisdom to which most moderns can only aspire

A century after its original publication, Edmund G. Gardner’s unique study, The Road to Siena: The Essential Biography of St. Catherine, was reissued in 2009. The volume offers more than saintly hagiography: For the seeker, it highlights wisdom from a Doctor of the Church; for fans of history it is an encapsulation of the Italian Medieval period; for contemporary classicists, it is a sample of 19th-century literary taste rendered leaner — and thus more palatable to our era — through some deft moves with a blue pencil.

The Road to Siena introduces the reader to Catherine in her own time — dirt roads, disinformation and all.

Born in 1347, just one year before the plague would devastate Siena, Catherine’s was an era of stark extremes: the scholarly poet Petrarch beside the romantic Boccaccio, Tuscan beauty marred by violence, corruption, and the plague. The duality manifested itself in a church being wrestled over by two popes, and in Catherine herself: an uneducated woman of prolific letters; a pragmatist and profound mystic; a lunatic who communicates with lucidity; a woman too tidy to wear a hair shirt but indifferent to the steel chain wrapped around her torso and biting into her skin.

Pruning history down to its essentials, we see young Catherine refusing marriage. At the age of 16, when most teenagers today venture out into the world brandishing brand-new drivers licenses, Catherine exited adolescence through the portal of her medieval cell — a simple room in her family’s house — in the habit of a Dominican Tertiary. There she submitted herself to ascetic practices and privations that, in our era, would be diagnosed as masochistic or schizophrenic and medicated away; there she was mystically “married” to Christ on the last night of Carnival. She emerged from her cell three years later wearing a pearl and diamond ring, given to her by Jesus and visible only to herself. Her enclosure had been a conflagration, and within the flames of her divine passion the world’s Catherine was burned away. And she herself had become an unforgettable fire.

What was left was God’s Catherine. She ventured out into a city still processing a plague that spared less than fifty percent of the population, and she began to serve the poor and the sick. Because her nature was pleasing, she was quickly sought out and before long, this maiden raised to humility was advising her own priests and the surrounding noblemen in forthright and uncompromising language: “Instead of a woman,” she wrote to Queen Giovanna of Naples, “you have become the servant and slave of nothingness, making yourself the subject of lies and of the demon who is their father.” This was a woman wielding power, influence and wisdom to which someone like Hillary Clinton can only aspire.

From her humble Tuscan beginning, she traveled to Florence, Pisa, Rome and, eventually, even to Avignon, all at the behest of powerful churchmen who recognized her tough but fair-minded brilliance and who trusted her passionate desire to effect a peaceful resolution to a ruinous schism. The question of papal succession may not have been settled in her lifetime, but that Catherine succeeded in bringing the fretful Pope Gregory XI back to Rome at all stands as a remarkable achievement, given the pontiff’s dithering nature.

Unschooled, Catherine spontaneously learned to read while in her anchorite cell, but she could not write for most of her life. Undeterred, Gardner tell us, she would dictate multiple letters to different scribes, simultaneously:

We see her dictating simultaneously to these three young men three letters: one to Pope Gregory, another to Bernabo Visconti, and a third to a certain nobleman. … She dictates first to one, then to another. At times, her face is covered by her hands of veil, as though she is absorbed in thought. … Then suddenly, all three of the scribes stop writing, look puzzled, and appeal to Catherine for help. They have all taken down the same sentence, not knowing for whom it was intended. Catherine reassures them saying, “Dear sons, don’t trouble over this, for you have done it all by the work of the Holy Spirit. When the letters are finished, we will see how the words fit in with our intentions, and then we’ll arrange what had best be done!”

By this same method was her book, The Dialogue of Divine Providence, dictated, and Catherine, in typical detachment, would refer to that masterpiece as “the book in which I found some recreation.”

Detachment was the key for Catherine; a virtue she cultivated from early childhood when she was forced to labor for her family as punishment for refusing marriage. It was a startling contrast to the society around her which, still dazed by the cruel efficiency of the plague, took refuge in the tangible and the worldly, becoming all-too-attached to material possessions, recreation, honors, and titles. Because she was detached, she was able to assess clearly what others could not, to see what must be done when others would not.

It was this detachment that made her the necessary instrument to bring the vacillating and weak Pope Gregory XI back from Avignon to Rome. “Be a manly man,” she urged him. “Wanting to live in peace is often the greatest cruelty. When the boil has come to a head it must be cut with the lance and burned with fire and if that is not done, and only a plaster is put on it the corruption will spread and that is often worse than death. I wish to see you as a manly man so that you may serve the Bride of Christ without fear, and work spiritually and temporally for the glory of God according to the needs of that sweet Bride in our times.”

Gardner helpfully prepares a modern reader’s sensibilities for an encounter with Catherine’s ascetic practices. His descriptions of a post-plague culture so extreme it could produce riots and excess on the one hand and zealous pragmatic mysticism on the other help to reassure the reader of Catherine’s mental health. Our own cultural cues, laden with Freudian and Jungian theory, will instinctively find Catherine’s visions, and scenes of her scourging herself “until the blood ran from her shoulders to her feet” or sneaking into the boiling waters of a local spring to meditate on the pains of hell and purgatory both repellent and discomfiting. To read that ingesting even the smallest portion of food prompted Catherine to induce vomiting by tickling the back of her throat with a feather is to immediately cry out eating disorder! Yet doing so diminishes the saint unfairly. Where Gardner fits Catherine’s spiritual privations to her culture, editor John Sweeney (in his numerous and thoughtful annotations) helps the reader make useful distinctions between anorexia sacra and anorexia nervosa ; the reader is reassured that Catherine is no madder, in her extremes, than was St. Francis when he kissed the leprous face of a beggar. She is neither the first nor the only mystic candle whose flame subsisted on the wick of the Holy Eucharist alone.

The Road to Siena is a fairly brief but concentrated book illustrating a rather brief but concentrated life. Our instincts to distrust Catherine’s visions as delusions and her hearty exhortations as mania are natural, but repeatedly Gardner — from a century’s distance — manages to put them down in turn, and all of our modern understanding must be humbled a bit when we read that the invisible stigmata Catherine claimed in her life became manifest and quite visible upon her death, even if her mystical wedding ring did not. Taken together, the book brings the reader into close contact with Catherine’s flame; one feels the heat that singed the consciences of popes and monarchs alike.