To Transform Society, Be Ready to Die, Cardinal Advises 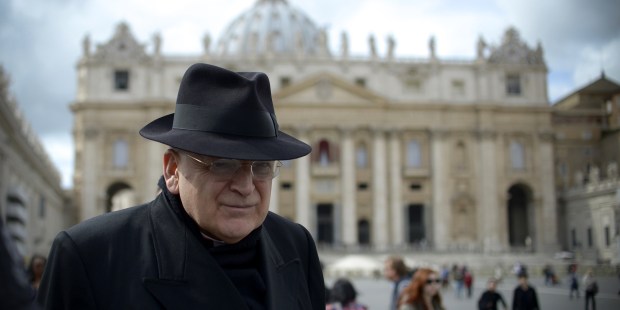 When Catholics approach Cardinal Raymond L. Burke to express their concerns about evidence of decay in society and the Church, he urges them to “deepen their understanding of the constant teaching and discipline of the Church” and to make their voices heard by Church leaders.

In a May 7 talk addressing the “Rome Life Forum” sponsored by the group Voice of the Family, Cardinal Burke, patron of the Order of Malta, acknowledged concerns about possible confusion in the Church on fundamental dogmatic and moral truths, and said bishops need to “understand the urgent need to announce again with clarity and courage the truths of the faith.” He added that faithful Christians should be prepared for martyrdom out of love for Christ and His Church, and that martyrdom can take one of several different forms.

Cardinal Burke, who served for years as head of the Vatican’s supreme court, said he is concerned about a growing “man-centered and world-centered perspective, especially in the Church” which expresses itself in a “secular understanding of the divine realities which are part and parcel of our daily life.”

“For example, today in the Church, there are those who refer to the objective reality of the grace of marriage as merely an ideal to which we more or less seek to conform ourselves,” he said. He said it goes against right reason say that the Church professes faith in the indissolubility of marriage “and at the same time admit to the Sacraments those who publicly live in violation of the indissolubility of marriage.”

The cardinal was referencing recent controversies surrounding speculation that the Church might allow persons who are divorced and remarried, without the benefit of an annulment, to receive Communion. “If a person who is living publicly in violation of his or her marriage bond is admitted to the Sacraments, then either marriage is not indissoluble or the Sacrament of the Holy Eucharist is not the Body of Christ and the encounter with Christ in the Sacrament of Penance does not require the firm purpose of amendment of our lives, that is, obedience to the word of Christ, ‘sin no more.'”

Cardinal Burke focused much of his speech on the work of the late Jesuit Father John Hardon, who wrote and taught on catechesis and evangelization. Father Hardon died in 2000.

“He knew that the only way to transform the society, that is, to turn the society around to Christ and His Mystical Body, holy Church, is for individual Catholics to live their faith with complete integrity, also in the face of loneliness, ridicule, persecution, and even death,” Cardinal Burke summarized.

Father Hardon taught that there are different types of martyrdom, including the one we most often think of, the martyrdom of blood. But there is also a martyrdom of persecution, when Christians are deprived of the freedom to practice their faith.

“One cannot help but think of the current situation in some nations,” Cardinal Burke commented. “A totally secularized government makes legal and even promotes the most grievous violations of the moral law, for example, procured abortion, euthanasia, so-called ‘same-sex marriage,’ human cloning and the wholesale destruction of human embryos for the sake of research, and now is trying to force Catholics and other persons of good will to cooperate formally in evil acts to the total violation of their conscience.”

Catholics are called today, more than ever, to stand up for the truth which Christ teaches us, even if it means loss of goods, government harassment and imprisonment. I think, for instance, of the threat of the loss of tax exemption, with its disastrous effects on many apostolates of the Church, which may be the necessary result of holding true to our faith and the moral law. We can do nothing less than to hold true to Our Lord Jesus Christ and to the truth which He hands on to us in His Holy Church, no matter what suffering or persecution we may face.

But the martyrdom of persecution is a “participation in the Passion of our Lord Jesus Christ and, therefore, brings the deepest joy to the Christian, notwithstanding the intensity of suffering involved,” the cardinal assured.

Another form of martyrdom–and the most common–is that of witness.

“The martyr of witness may not face active opposition, but he faces passive opposition at the hands of ‘those who lack a clear vision of the Savior or who, having had it, lost their former commitment to Christ,’ said the cardinal, quoting Father Hardon. In the Jesuit writer’s words:

Here the firm believer in the Church’s teaching authority: the devoted servant of the papacy; the convinced pastor who insists on sound doctrine to his flock; the dedicated religious who want to remain faithful to their vows of authentic poverty, honest chastity, and sincere obedience; the firm parents who are concerned about the religious and moral training of their children and are willing to sacrifice generously to build and care for a Christian family – natural or adopted – such persons will not be spared also active criticism and open opposition. But they must especially be ready to live in an atmosphere of coldness to their deepest beliefs.

Cardinal Burke’s talk is published at this website, which also has the video of his presentation.