Dear Cecilia: The Story of a Catholic Hip-Hop Artist

My childhood wounds were magnified and reflected in the lyrics I listened to day in and day out.

To mark six months of Cecilia, we bring you our very first “Dear Cecilia,” a way for our artists and fans to connect. These are open letters: a chance for artists to share their story, for music lovers to share about a song that inspired them, etc.

Our first letter comes from one of our artists, Nick “Dy-Verse” Torres:

I was given the daunting task of writing a bit about my life in light of the music I make and the Catholic faith that I subscribe to. A humbling task I must admit, because unlike many of you reading this article, I have not always exemplified a virtuous Catholic lifestyle throughout my short span on earth. Perhaps, it is why I relate to those who have not, for lack of better words, fit the stereotypical church mold. Now I say this with love and appreciation for those who have: Be it not for you, I would not be where I am.

To give you some context, I was born in Bogota, Colombia in 1991. An era that marked the downfall of one of the world’s largest drug dealers, Pablo Escobar; a time very much turbulent and void of peace. In spite of this violence, the people were marked for their Catholic history and devout practices in the faith.

Financial circumstances and the pursuit of opportunity brought my family to a small town near the ritzy Palm Beach, Florida where I would be raised. There is where I began a “love affair” with a genre of music called hip-hop, due to its mainstream popularity and lyricism that resonated with the marginalized.

My family life was a peaceful one as my parents persevered through the ups and downs of marital life in the midst of a huge transition: culturally, economically and the difficulty of being apart from their families. Our Catholic faith was nourished in the midst of troubling circumstances and we continued fighting the good fight remaining close to our local parish community.

In spite of firm foundations in the faith, I began rebelling in my own way. My childhood wounds were magnified and reflected in the lyrics I listened to day in and day out, fueling the fear and hate due to the plague of racism and a strong anti-migrant sentiment. Furthermore, when violence wasn’t the topic, sexual promiscuity was the theme promulgated in the music, and the young curious boy I was became intrigued. During this time period, I began to produce and write my own songs, with a background in playing the guitar and a natural love for writing. My desired lifestyle—because I can’t say I was actually living like my role models—was then reflected in the music.

My talent was noticeable and I continued to work on refining my skills. At 16, I met with a rapper who had been featured on our local radio station, and, inspired by our meeting, began to take my music dreams to the next level. Around the same time, I met another local artist whose message was different. He went by Rashad, and the mixtape he convinced me to buy was titled “Words of Power.” I hadn’t thought anything of it, but upon pressing play on my CD player, I could not help but listen to the entire compilation from start to finish and replaying it a few more times. His message was one of rebellion: rebellion from a genre that promoted guns, violence and objectification of women. He wanted to lift people up with his message and promote the good. Although his music wouldn’t have been labeled Christian (a few expletives here and there), his words really did affect me powerfully, and brought my heart closer to the Christian faith and perspective. However, aspirations remained with the resonating message I had grown accustomed to listening to.

Upon entering college, I quickly learned that the path I had chosen for my personal life was leading into despair and depression, rather than the true pleasure and satisfaction I had been seeking. I began renouncing my “old ways” with the inspiration of a few of my Christian friends, the prayers of my family, and the help of a community of young adults at my campus’s Catholic Church.

I devoured church teaching and history, daily Mass became my routine and I would not leave my Rosary alone. It was as if all of the time I had lost was being made up in a matter of months. My spiritual reawakening was not hidden from my music. I quickly became familiar with the Christian hip-hop scene, and my iTunes library quickly shifted from Ludacris and Marshall Mathers (Eminem) albums to Lecrae and Matt Maher albums. My drastic lifestyle change began to alienate some of the friends I still had in spite of my poor choices months prior. I realized that my dreams and aspirations at becoming a full-time musician would not be as likely, since I was not rapping about what mainstream culture was rapping about, but instead the importance of praying, attending Mass, learning about faith and spiritual warfare. Furthermore, the Christian hip-hop artists I was listening to didn’t touch on the same subject matter that Matt Maher did, and for the most part I hadn’t heard of any other Catholic artists at that point besides him.

However, I quickly learned there were others like myself.

One of the Bible Study leaders at my local parish, introduced me to a subset of Christian hip-hop artists. These hip-hop artists were of the Catholic faith, and proclaimed their faith boldly in song and music. Their music could all be found on a site called Phatmass. The mission statement on the website said it all:

With orthodoxy, charity and humility, phatmass will infiltrate the entire planet earth with Catholic propaganda. The “phat” in phatmass stands for “Preaching Holy Apostolic Truth”. Founded in the year 2000, we are an online community, infiltrator of social media, bold statement maker, and authentic hip-hop production entity.

I wrote to the website founder, dUSt, who took a liking to my style. I began connecting with other artists on the site, and found myself starting a hip-hop group with 2 of the artists, Le and C2six. We called the group FoundNation; echoing the parable of the prodigal son in the Gospel of Luke, “he was lost and has been found.” As we began working on the album, we met a producer and singer, Separate M1nd, who completed the group. Soon after, a Franciscan friar, Fr. Masseo Gonzales, was introduced to our music and project, and he began to invest in the group, both managerially, spiritually and financially through the non-profit he founded, El Padrecito Ministries, which aims at using out of the box programs within the performance arts and music as a form of outreach to inner city and marginalized youth. Our missions aligned, and have since then traveled around sharing our music and videos with the youth.

Throughout performances and opportunities, I have sought to build relationships with other artists, in and out of the Catholic faith. I had a brief encounter with the great music community, Love Good Music, run by Jimmy Mitchell, when I performed alongside various artists in Nashville’s very own Rocketown. There I met an amazing young artist by the name of Samuel Knight, who has greatly contributed to a few singles I have had the pleasure to write and produce. In 2012, I received an invitation to attend the live recording of a concert by Colombian pop-star, Juanes, to be aired by MTV Tres (the Latino MTV). This invitation came about by submitting an entry to a contest the channel was having, with the prize being an opportunity to sing alongside Juanes at the live taping of his concert. My rap rendition of “A Dios Le Pido” (To God I Ask), one of Juanes’ greatest hits, was met with great response. Although not qualifying for the contest, the production team, Juanes and show producer Juan Luis Guerra, applauded my work, both musically and video-wise, and invited me back stage.

After graduating school, opportunities like these gave me the courage to pursue music and ministry full-time. However, a short 10 month stint at pursuing both, although fruitful, proved to be the wrong path and I began working elsewhere full-time shortly after. As an artist, I continue to develop my artistry, while balancing a full-time job, school, and family life. I speak from the perspective of a young adult who whole-heartedly seeks to live out a Catholic faith and world-view in all aspects of life, pursuing holiness myself through the sacraments, prayer and application of Church teaching, amidst my own sins and weaknesses.

The messages, although coming from the faith, are certainly not limited to a Sunday school catechism class in rap form, but are certainly fueled by these teachings. So, although my music isn’t for the liturgy, its role is as important in promulgating a lifestyle that molds itself on the principles of Catholicism. Because I know how much this genre affected me, and in my travels have seen how much the youth are attracted to it, I believe that in living out Catholicism and expressing my life through these beats and rhymes, others will be affected and be shown a different path. Prayerfully asking the Holy Spirit to guide myself, and these artists I work with, I pray that the messages plant seeds so that others may encounter Christ and His Blessed Mother in all aspects of their lives, in mercy and grace. 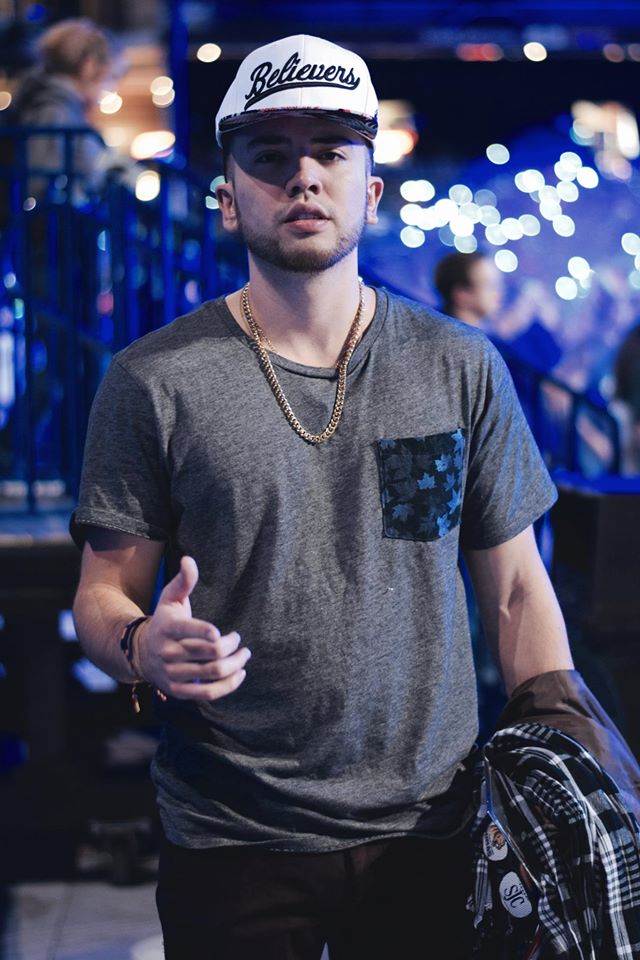