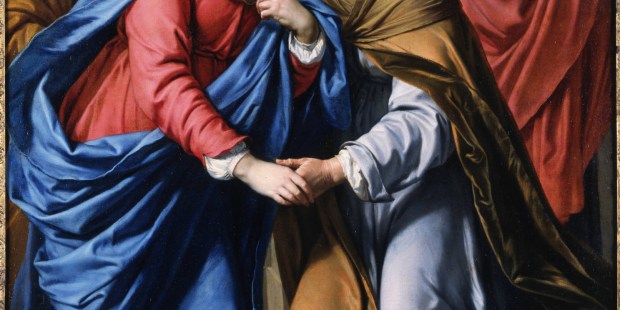 The Spirit will lead us to see his work, if we let him

Elizabeth was sweeping the courtyard outside her home when she heard the sound of an ox cart stopping in the road. She looked up and saw a young woman standing at the entryway. Elizabeth was momentarily puzzled by the visitor’s arrival, but soon she had the mystery solved.

The young woman’s voice and the smile on her face were familiar. Elizabeth quickly recognized Mary, her young cousin from Nazareth. Watching her approach jogged a memory of being with Mary at a family gathering outside of Jerusalem when she was only eight years old. During one big dinner, while Zechariah was engaged in a lively discussion with a group of the older men, Elizabeth sat by herself feeling lonely and sad. Unlike the other women in the group, she had no children of her own. Mary came over to cheer her up. The younger cousin launched into a ridiculous discourse about magpies and soon the two were enjoying a delightful conversation.

Now, several years later, Mary was standing in the courtyard of Elizabeth’s home. Elizabeth quickly surmised from the travelling bag that Mary had come to help with her older cousin’s pregnancy. As her baby stirred in her womb, Elizabeth rightly understood that John was as excited about Mary’s arrival as she was.

As in a flash, suddenly Elizabeth saw very clearly that God was at work in all of this. He had been working in Mary’s life for many years. God made Mary the remarkably friendly and thoughtful eight-year-old at the family reunion. And God made her the generous young woman who travelled many miles to help a cousin who was about to give birth.

God must have shared with Mary the news about Elizabeth’s pregnancy. That is how Mary knew to make the trip in the first place. And now God shared with Elizabeth — through the joyous leaping of the child in her womb — that Mary too carried a child. John was thrilled by the arrival of Mary and the child she bore because the lives of the two children were intertwined. They were both part of God’s amazing plan. John was destined to announce the arrival of a Savior. His first announcement had just taken place.

Elizabeth was filled with the Holy Spirit that day. She received insights that she never could have gained on her own. Most especially, the Holy Spirit helped Elizabeth recognize God’s grace active in the world. Such recognition is a wonderful gift and not reserved for saints. Jesus prayed that all of us might share the same gift.

Time and again, Jesus pointed out grace in the lives of people he met. He knew how important recognizing that grace was. “Look at the big-hearted tax collector up in the tree!” Jesus exclaimed. “Look at the poor widow with the two copper coins! Look at the Roman officer with the remarkable faith!” Jesus wants us to recognize God’s grace working in the lives of the people around us and in our lives, too. Such recognition gives us hope and encouragement and unites us with others who share in God’s marvelous plan for the world.

Beyond recognizing grace, Jesus wants us to proclaim it. When we see God’s grace at work in the lives of friends or family members, we should tell them about it, in case it has escaped their attention. When God’s grace became evident to Elizabeth, she proclaimed it to Mary as she gave her a warm embrace. And, of course, Elizabeth’s proclamation was not just for Mary. It was for all of us. We are reminded of her announcement often: “Hello Mary! Most blessed are you among women, and blessed is the fruit of your womb!”

May the Holy Spirit give all of us such insight!

For the Mass readings for the Feast of the Visitation (May 31), click here. To learn more about the painting of Mary and Elizabeth, click here.

Author’s Note: This is a reflection on one of the lesser-known characters that appear in the Scripture readings at Mass. We can learn something from those characters, I think. I follow the lead of St. Ignatius of Loyola in using my imagination to fill out some of the details of the story.