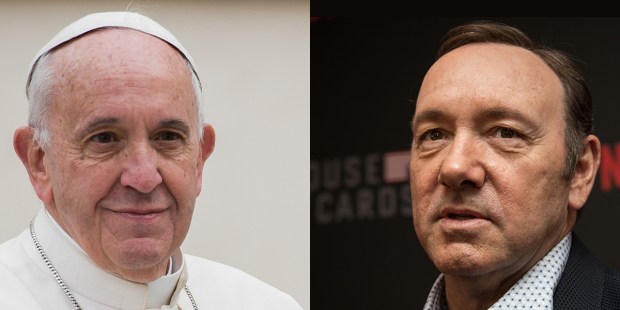 Like a perverted parody of Saints Francis and Clare, the Underwoods are all appetite, constructing what cannot stand

I’m not a binge television watcher. I usually weary of a series after three or four episodes, but one has captivated my imagination: House of Cards. The series charts the rise of unscrupulous congressman Francis Underwood and his devious wife, Claire. Like a demonic parody of St Francis and St Clare, the Machiavellian pair manipulate, murder, plot and scheme their way to the White House. Readers should be warned that the series is dark and troublesome with not a few episodes featuring adult content.

The violence, illicit sexual encounters and corruption not only point to the corruption within the corridors of congress and the halls of the White House, but also show the seamy underbelly of contemporary American culture. We get the politicians we deserve, and although Francis and Claire Underwood are fictional characters, their sordid narrative echoes yesterday’s news.

Like Shakespeare’s Macbeth, the series reveals several truths about unredeemed and ambitious human nature. First, once a person is consumed by ambition he or she learns to lie. Once the lying begins it leads to further evil. Deeper lies must follow to cover up for the original lie. Relationships are then constructed on lies instead of trust, and each relationship becomes an untruthful transaction. Eventually, the ambitious person is living a lie. Every aspect of life is infused with level after level of deeper and deeper lies. What follows next is murder, for when the liars are threatened by those who would unmask them, the truth tellers must be silenced, isolated, and finally eliminated.

If House of Cards echoes contemporary American politics of power, we find it absorbing because the same evils exist within our own lives. The stakes may not be as high or the evils as damnable, but our own lives are too often dominated by our ego, ambition and self-seeking. Like Francis Underwood, we lie, manipulate and present a charming exterior. Like Francis and Claire, we collude to put ourselves forward and look after “number one.”

At the end of the British version of House of Cards we come to understand the title. As in any great tragedy, ambition brings the villain down and the whole edifice he has built crashes like a house of cards. The morality tale reminds each of us who would build on pride and ambition that it cannot last. To build anything out of our own ego is to build our house on the shifting sands. It cannot stand. When the wave comes in it will crumble.

Pope Francis’ greatest strength is in the symbolic gesture. He communicates the way of the gospel across cultures and across age groups as Saint Francis did, with the radical action, the living image and the dramatic choice.

In the television show, Francis Underwood takes his place as president having built his house on an unstable marsh of deals, deception, and death. In real life, Pope Francis builds his house on the rock of truth, beauty, and goodness that is Christ.