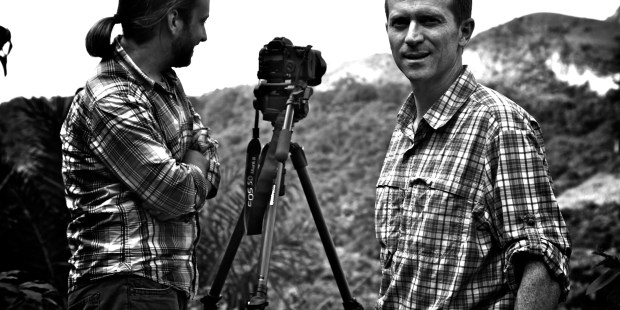 His new documentary film “Poverty, Inc.” is winning awards and changing minds across the spectrum

There’s a new documentary about global poverty that’s making a splash wherever it’s shown. Poverty, Inc., co-written, directed and produced by Michael Matheson Miller, is a full-length film that’s played at more than 50 film festivals and 100 universities — including Harvard, MIT, and Cornell. Among other honors, it was recently named best documentary at the International Environmental Film Festival in Paris, and has been endorsed across the political spectrum — from libertarian economists to progressive filmmakers like Michael Moore.

Miller is a Research Fellow at the Acton Institute where he’s been for over 10 years in various capacities. He also directed and produced the Poverty Cure DVD series, a 6-part series for churches, schools and universities that examines questions of poverty from a Christian perspective.

Miller, who is married with six children 13 years old and under (one due any day), has lived and traveled in Europe, Asia, Africa, and Latin America, and lectures internationally on moral philosophy, economic development and social theory, and entrepreneurship. He’s a frequent radio guest and has been published in The Washington Times, The Detroit News, The LA Daily News, and Real Clear Politics. Before working for Acton, he spent three years at Ave Maria College of the Americas in Nicaragua, where he was chair of the philosophy and theology department.

It’s Miller’s deep belief in the dignity of every human person that undergirds his passion for changing the conversation about poverty and other complex social issues. He spoke to Aleteia’s Zoe Romanowsky about Poverty, Inc. and how we can begin to think about charity in a new way.

Zoe Romanowsky: In much of your work, you seek to bring innovative and effective solutions to real-world problems — poverty being the big one — and doing so in a way that’s rooted in the Catholic view of the human person and society. What did you want to accomplish with the film?

Matthew Matheson Miller: One of the things we’ve tried to do is re-articulate and reframe the discussion about poverty. We tend to treat poor persons as objects — objects of our charity, objects of our pity, objects of our compassion — instead of treating them like subjects and protagonists of their own stories. And when I say “subjects,” I don’t mean of a king or queen, but in the sense of the grammatical, as another “I.” We did more than 200 interviews around the world for the film, and we let people tell their stories and share their experiences so the audience can better understand the “poverty industry.”

I’m not sure that when people think “Catholic” they think “innovative.” Do you agree, and if so, why do you think this is the case?

Maybe we’re not innovative because that’s not our highest goal — our highest goal is to seek after the truth and then conform ourselves to it. Aquinas says that “truth is the conforming of the mind to reality.” That’s hard. But a culture that takes truth seriously will seek after truth — and when we do this, we become philosophical rather than ideological, which opens up a host of possibilities.

Catholicism/Christianity is not ideological; it’s philosophical, and at this point in time a lot of our work is about “recapturing.” I actually think that as we continue to recapture — and we’re not struggling so much to understand and wrestle with what was historically and traditionally a Catholic view of the world — what we’ll see is a flourishing of creativity that’s going to be more innovative and interesting than defunct secularism can provide.

Yes, and this is something I’m still thinking through, but think about all the people talking about “design” and “lifestyle” and how we want to “meet human needs.” And that there needs to be entrepreneurship to meet these human needs. But we’re operating under the constraints of a limited reductionist rationality that comes to us from the Enlightenment, which Pope Benedict spoke about in the Regensburg Address, and even though we live like humans and feel like humans, the intellectual framework we are operating with is highly constrictive. So I think this limits innovation and thoughtful ways to solve problems.

A lot of the work we’re going to be doing right now in this generation, and the one after us, is going to be really recovering the basics. We’re going to see innovative flourishing when those seeds have been planted and start to flower. Maybe I’m being overly hopeful, but I don’t think so.

What did you learn from making Poverty, Inc.?

I learned a lot.

One thing was that while humans are very different around the world, it is written into our nature to have creative capacity. That was deeply affirmed for me.

I also learned things like how our images of places are often quite simplified. We think of places in Africa or Latin America and of Haiti as poor and dangerous and we don’t think of them with lots of variety and diversity. In the film, one of the stories we tell is about a solar panel company in Haiti. Most of us don’t think people are making solar panels in Haiti. Sure, we see the lack of what we take for granted like paved roads and electricity, but the bigger thing is that people are excluded.

I learned a lot from the more than 100 interviews I did personally for the film. The strongest thing was in one sense something I already knew, but when I heard Daniel Jean Louis — a Haitian business development guy featured in the film — articulate it, I realized I really wasn’t seeing some of this from their perspective. Something he said to me has stuck with me— No one wants to be a beggar for life.

What’s the call to action here?

This is always hard because it’s not necessarily super exciting. We’re called to prayer, fasting, and almsgiving. We should be more generous. At the same time, the call to action is not one specific thing.

The first thing is to think seriously about it. And it really depends on the place you’re in because work with poverty needs human relationships. What needs are around you? Maybe of us don’t need to go to a foreign country. Oftentimes, there is need in our own backyards.

So, I’m wary to say go give to this organizations or that one. I do think there are some good organizations out there doing business development, who are helping economies and communities. So find those and stop giving to groups that are part of the problem.

The way Jesus talks about poverty is pretty serious. But we need to do due diligence. Helping poor people is hard. I know that’s not a very satisfactory answer. I’m not saying don’t help in emergency situations; what I am saying is that we’ve used this emergency aid model as the model for economic development and that needs to change.

What do you consider to be your personal mission?

I’m a teacher, and I try to help people think about things. What drives me more than anything else and influences my work is the subjective dimension of the person. This is the wonderful deep contribution of Jewish and Christian thought. The person is not a radical individual nor is the person a cog in the society, but a subject. That’s why Pope Saint John Paul II is so important to me, and Pope Emeritus Benedict XVI.

C.S. Lewis has this lovely line that I always quote: “There are no ordinary people. You have never talked to a mere mortal. Nations, cultures, arts, civilizations — these are mortal, and their life is to ours as the life of a gnat. But it is immortals whom we joke with, work with, marry, snub and exploit — immortal horrors or everlasting splendors.”

At the end of the day, that’s my mission — to promote and teach and encourage people to think about the dignity of the person as a subject.

This is the seventh installment in Aleteia’s series on Catholic innovators. Be sure to check out our previous interviews with Jenna Guizar, Bishop Christopher Coyne, Brandon Vogt, Lisa Hendey, Mary Rose Realy, Obl., OSB, and Daniel Mitsui.