Lust and a Willingness to Compromise Do Not a Marriage Make 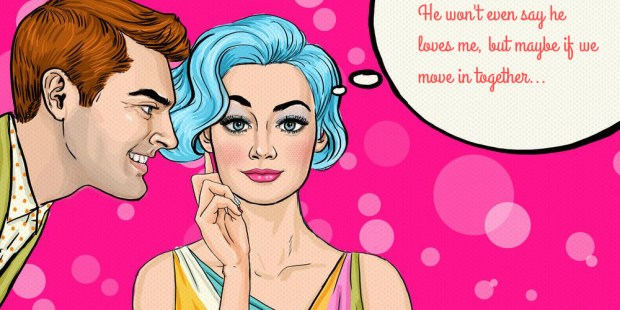 “Unrealistic lust is a great place to kick off” a relationship. That’s the counsel the advice columnist for the liberal English newspaper The Guardian gives to a woman who doesn’t know whether to move in with a boyfriend who won’t even say that he loves her. Save “duty sex” for later, Mariella Frostrup continues.

The desire for a fellow human being is about as real an expression of human nature as you can get. There is little sense, at the start of a relationship, in compromising on something so fundamental to harmonious cohabitation. A pragmatic approach to a long-term relationship may be sensible, but only when that sense of compromise toward a greater goal is evenly distributed and shared rather than dictated by one partner.

Kicking off with unrealistic lust leaves young women anxious about moving in with men who don’t want to marry them, but the good of sexual indulgence is not to be questioned. Otherwise Frostrup, like all her peers, believes in “compromise.” It’s the one marital virtue she recognizes.

Which makes sense since she has, as far as I an tell, no clear idea of marriage, other than as a more intense and legal version of living together that some people choose because it makes them happy at the time. If you have no ideal to aim for, no form to fit, no rules to live by, you can only compromise when you disagree.

A marriage becomes a ship with two captains who enjoy sailing together, at least for now. When they disagree about the course to take they chart a course halfway between the ones they each want. It’s good enough if all you want to do is sail together and don’t want to get anywhere. If they can’t compromise on their course, one or the other can abandon ship.

It can work, because some people have a truer idea of marriage than they can put into words, and because years of practiced love can teach you what you didn’t know when you started and perhaps still can’t put into words. I’ve known elderly couples who talked about marriage like libertines, but loved each other like an old couple in a Norman Rockwell painting.

If you give yourself body and soul to someone, you will suffer — probably from yourself and from your spouse, and certainly from life. When my grandmother died, my grandfather, 92, alert and lively but with most of his memories lost, asked everyone in the nursing home where his wife had gone and why she had left him. He could not understand the answer. That’s all he knew, the last few months of his life: His wife of 71 years had left him. It was a hard, hard end.

We need to be trained to suffer. We need more than a belief in compromise and the thin, sickly idea of marriage it supports. We need a belief in marriage as a calling that will give us joy in living the life we have been given, even though it will not be the life we once chose. I wrote about this some years ago in an essay called Choosing Love, Making Life.

A priest told me about a very sick man and his wife he watched at a special Mass for couples who had been married a long time. He was sitting near the altar and looked out on the front row, where the sick and handicapped had been seated. The husband lay on a gurney, having suffered for years from a degenerative disease that left him able only to move his eyes.

You don’t get that kind of love just by a marriage in which compromise is the sole virtue. You get it by trying to live by an ideal, a form, rules: by “I take you . . . to have and to hold, from this day forward, for better, for worse, for richer, for poorer, in sickness and in health, until death do us part.”

[Editor’s Note — Take the Daily Poll: Is “Shacking Up” Just Easier Than Marriage? ]