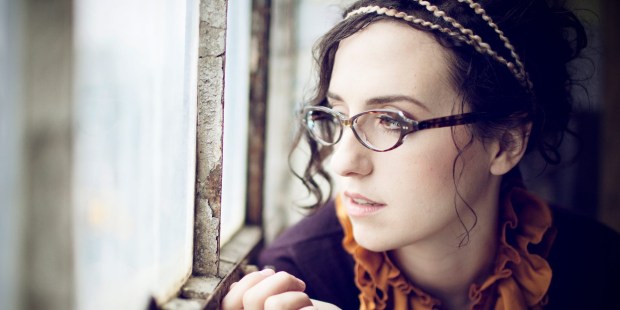 Audrey Assad is an award-winning musician, singer, and songwriter. Lauded by The New York Times, she’s a multiple Dove Award nominee and iTunes Christian Breakthrough Album of the Year recipient. Earlier this year, Assad released her five-star acclaimed and No. 1 selling album, Inheritance, a collection of hymns and original songs that pays homage to Assad’s childhood heritage and to her Catholic faith. She calls her music “soundtracks for prayer” and releases it on Fortunate Fall Records, which she co-owns with her husband, William Price III.

In addition to recording and touring, Assad speaks at national conferences and events about art, faith, womanhood, justice, and pornography addiction. She has sung at St Patrick’s Cathedral and was featured at the papal event at the World Meeting of Families in Philadelphia last fall.

What many of Assad’s fans may not know about her, however, is that she’s the daughter of a Syrian immigrant. She says her father’s example and her family heritage has inspired her music ministry as well as her worldview. Assad is participating in and promoting National Refugee Sunday, which is this Sunday, June 26, and recently shared some of her personal story, as well as her perspective on the refugee crisis, with Aleteia.

Your father was a Syrian refugee. Can you share a little bit about the circumstances that brought him and other members of your family to the United States?

My father came to this country in 1973 with his mother and two siblings. They overcame many hardships to do so —among them homelessness, divorce, and a secret escape by my grandfather over Syria’s borders to Lebanon, where they petitioned for refugee status and were then brought to the States.

My father, Roy Assad, was a sponsored child through a church program in Syria, and the man who had been sending money every month in my dad’s name was one of their only contacts here when they arrived. He eventually employed my dad and gave him his start in the insurance business, in which my father still works over 40 years later.

Their story is rich and textured and provides a backdrop to my childhood that irrevocably shaped me, my ministry, and my worldview.

You wrote a piece in anticipation of World Refugee Day in which you talk about your father teaching you to: “Dream, Believe, Do, Repeat.” How did he model that, and in what ways has it shown up in your life?

My dad has worked tooth and nail to accomplish his dreams and goals—as an immigrant with no college education, he has owned companies ranging from insurance agencies to restaurants. I’ve watched him dig his hands into every city in which he’s lived, making it a better place to live from the ground up. He’s played a huge part in revitalizing downtown West Palm Beach, where he is a resident. He isn’t satisfied with simply residing somewhere—he’s driven to make it a better place for everyone.

I’m not half the go-getter my father is, but I do see myself as someone who cannot simply exist within a structure—I find myself compelled and driven to build and develop and push the envelope.

How does the experience of being a child of a refugee shape the choices you make in your life, including your work as a musician?

I think I’m more bent towards entrepreneurial work than I might naturally be, had my dad been somebody different with less drive to be self-employed and self-made. I have forged out on my own in this music thing—and that’s in large part due to what I learned from my dad’s drive and passion and relentless optimism.

How do you think today’s refugee situation compares to when your father and his family were refugees?

My father and his family were not refugees of war—it was relatively peaceful in Syria then. So honestly, I think it’s much more difficult now for Syrian refugees. These are people who have lost absolutely everything they own and, often, multiple members of their families. We’re talking about a situation where houses have been destroyed by rockets and barrel bombs, children have been starving in besieged cities, and displaced Syrians who do escape are welcomed almost nowhere. My dad and his family had very difficult lives, but it was pretty easy for them to come to the United States once they’d escaped. Nowadays, it’s a much longer and more arduous process for Syrian refugees.

What do you say to Americans who are concerned about the high number of Muslim refugees — whether from Syria or elsewhere — coming here?

I am who I am, and I do what I do in large part due to my father, his heritage, and his immigration here under duress. If we shut out Arabs, whose voices and gifts and brilliance will we be missing out on because of fears about our security? I understand that people are afraid of terrorists slipping through as refugees, and I think it would probably allay some fears [if people] researched the process by which we vet refugees who want to come here—it’s very robust.

Ultimately, especially for American Christians, I keep coming back to the thought that the Bible commands us to be hospitable to foreigners, plain and simple. National security is not a kingdom value, but hospitality is. Amos 5 says our religion is a “stench to God” if justice for the poor is not a priority to us. I take that very, very seriously. And I think God will bless those who open their hearts and/or their homes to people who have lost everything and who find themselves on strange soil, in a country full of people who don’t trust them because of their ethnicity and/or religion. I hope and pray every day that more Americans are softened to Syrians. I wouldn’t be here if they hadn’t welcomed my father.

You will be contributing to National Refugee Sunday on June 26th — how will you be participating and what is the message you want to send?

I’ve curated a group of songs I hope will be helpful to worship leaders/music ministers who are participating in National Refugee Sunday; themes range from God’s provision and mercy to specific refugee issues. I’m hoping that music ministers around the nation and the world will see this as a gift of opportunity—the opportunity to pray for, and be in solidarity with, refugees everywhere, and to open the hearts of the faithful to sheltering these precious souls in any way we can.