Sisters, nuns, aspirants, postulants, novices: What does it all mean? 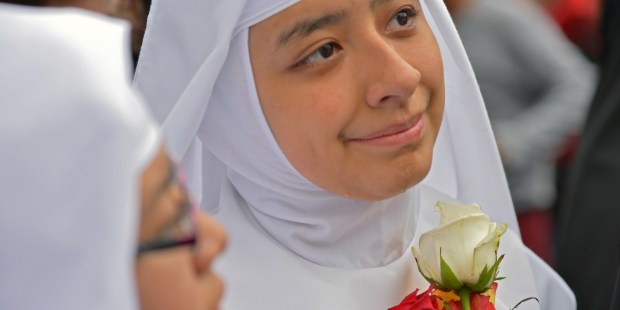 A helpful glossary of terms related to female Catholic religious

A recent Aleteia piece discussing why some religious women wear the habit and others do not prompted a question from a reader, who wondered “What’s the difference between a ‘sister’ and a ‘nun,’ and how are postulants different from novices?”

A word of warning: There are a million differentials between religious orders and communities, so this is a very basic and general overview. There will always be exceptions to something written here. Always.

Very briefly, a “nun” is a woman who has discerned a call to live within an abbey, a monastery, or priory, as a contemplative religious. This usually involves living and working within a designated “enclosed” space, off-limits to all but priests, medical personnel and workmen, and leaving the enclosure only for medical issues or business involving the monastery. As with monks, a nun’s “work,” aside from what helps to materially support the house, is prayer, which is ongoing throughout the day and offered for the sake of the Church and the world.

A “sister” is a religious woman whose apostolic charism is considered “active,” meaning that while she and her community certainly pray, they also assist the church through other means, among them social work, teaching, nursing, pastoral and retreat assistance, missionary work, media work, elder care, etc. Basically they work wherever they feel called.

A stickler will make a great point of differentiating between the two, but most sisters will refer to themselves as “nuns” and most nuns call each other “sister” so, while there is a difference, most religious women don’t care which term is used.

There are both male and female religious, and therefore some of these stages exist for both, but since the questioner was focused on women, we will be, too.

The rest of the terms and traditions should come with the added proviso, “except when they don’t/it isn’t” because all communities are different. But in general:

A postulant is someone who has formally moved in and begun to learn to live in community while remaining in the “asking” stage — a period of more intense discernment. Depending on the community, the postulancy lasts from 6 months to a year, and during this time she may or may not be called “Sister.” That, and whether or not a postulant wears some sort of uniform or follows a simple dress code, is up to the community.

A novice (from the Latin for “new,” or beginner) is a postulant who has been formally received into the community. The novitiate — usually (but not always) two years for women and one year for men — begins a time of intense formation, study and a deepening experience of prayer and will include both canonical and apostolic formation. If the community wears a habit and takes names-in-religion (some do both, some do neither and some communities leave the question entirely up to the individual sister or nun) all of that will usually (but not always) happen upon entrance to the novitiate, with the sister taking a white veil. Some communities will permit a name-change upon entering the novitiate, but withhold the habit until first vows, or vice-versa. Because the novitiate is still considered part of discernment, a novice is free to leave the community (or may be asked to leave) at any time.

Read more:
These Nuns Live in a Strict Cloister. So What Are They Doing on Facebook?

First vows occur when a novice has completed the required novitiate and requested formal admission into vows, and the leadership and fully professed members of the community have discerned her to be called to their order or association. The novice makes “simple” vows, which are canonically binding for a specific length of time — usually from three to five years, sometimes longer. She is now considered a “junior” or “temporarily professed” member of the community and may work in an apostolate and sign her name using their community abbreviation (i.e., Sister Theresa, fsp; Sister Mary Anna, RSM).

Temporary profession is still a time of discernment, and a religious is still able to request separation, but since the vows are canonical, it does require a more formal process.

Final (or “perpetual”) vows (in monasticism “Solemn Profession”) occur when the religious makes her vows for life as a member of that community. In most cases she signs her declared formula on the altar and shows it to all in attendance, and her vows are canonical. She is now “fully professed,” and in a sense, a “professional” at the life. As with any profession, formation is ongoing and lifelong.

More to read: Byzantine communities are similar, but different