5 holy hotheads who worked for heaven 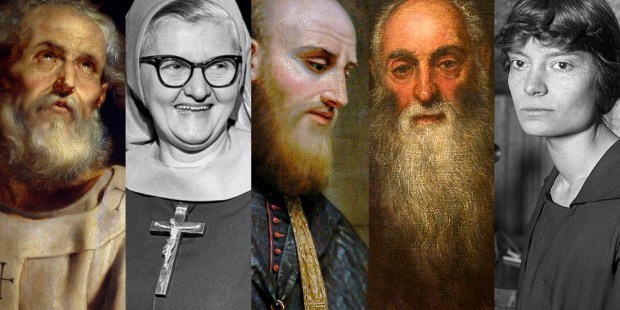 These men and women managed to turn their quick tempers into constructive, charitable service to God, the Church and the world

Recent events around the world have made a lot of people angry: angry at injustice, angry with political leaders, angry with the media, angry with terrorists and other perpetrators of violence.

“Anger is a desire for revenge. ‘To desire ven­geance in order to do evil to someone who should be punished is illicit,’ but it is praiseworthy to impose restitution ‘to correct vices and maintain justice.’” (CCC 2302)

Feeling angry when you hear about terrorism or see racism is an appropriate response. What you want to do is “to correct vice and maintain justice.”

Often we can’t control when we feel anger boil within, and for many of us it rises all too frequently (think The Hulk). The good news is that you are not alone. Many of the saints struggled with their feelings of anger and had to restrain themselves from committing a sin. They saw something wrong in the world and it made them angry, but instead of destroying things they used their anger to fuel them in their mission of righting injustices through charity.

So when you find yourself really angry, these days, call upon these five holy men and women who were hotheads, to help you redirect your anger into an appropriate outlet.

A man with many imperfections, Peter had a bit of a rough start as an apostle. Remember his anger at Jesus’ arrest in Gethsemane.  The soldiers entered the garden and asked which man was Jesus, and when he freely gave himself away to be bound in chains, Peter let his wrath fly.

“And behold, one of those who accompanied Jesus put his hand to his sword, drew it, and struck the high priest’s servant, cutting off his ear. Then Jesus said to him, ‘Put your sword back into its sheath, for all who take the sword will perish by the sword. Do you think that I cannot call upon my Father and he will not provide me at this moment with more than twelve legions of angels?’” (Matthew 26:51-53)

Anger at the injustice was certainly the appropriate feeling, but Jesus was quick to correct Peter and to show him that violence was not the answer.

Being well-known as one of our crankier saints, Jerome was very outspoken about his impatience with mediocrity. He spoke his mind freely and did not mince words, even going to far as to write in a letter that “one who dislikes Christ’s commandments, is more than Christ’s adversary; he is the anti-Christ.” His words would often get him into trouble and many did not like him.

However, he was quite aware of his shortcomings and lived a life of penance. There is a story of a bishop who saw a painting of the saint striking his breast with a stone and said, “You do well to carry that stone, for without it the Church would never have canonized you” (Butler’s Lives of the Saints).

Founder of the Catholic Worker Movement, Dorothy Day could not sit around while her fellow citizens experienced injustice. Her strong passion for the poor often gave her a reputation as an angry woman. When a priest was soliciting funds for a film about her, a man said of Day, “She’s been in my house a number of times and she was always angry. Saints aren’t angry…”

However, she was able to constructively channel her anger into non-violent activism. She explained in The Catholic Worker her thoughts on the role of anger, writing, “I have been reading Gandhi this last week, the new autobiography by Louis Fischer and it is a wonderful study for all who are seeking peace in the world. Gandhi said that anger is violence. So we see more than ever the temptations of the pacifist who may become inclined to anger at those who do not agree with him.”