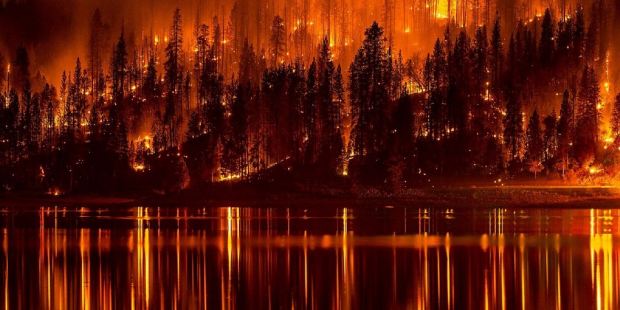 The deadliest fire in U.S. history was no match for the Blessed Mother

On October 8, 1871, in or around a place called Peshtigo, Wisconsin, several men were setting small fires in the woods. This was a common practice in clearing land for expanding railroads or for expanding farm land. Except, on this particular day, something unexpected happened. A cold front moved into the area creating winds that were close to hurricane force. The winds fanned the flames and the resulting Peshtigo Firestorm still can claim the ignominious title as the “deadliest wildfire” in American history.

To this day, no wildfire in the U.S. has ever caused more deaths. It is estimated close to 2,500 people perished in the raging 2,000-degree inferno. But there is an incredible side-bar to this story. Miraculously, there was a small group of people who were not harmed at all and they were right in the middle of the blaze. They were with Adele Brise.

Adele Brise was 24 years old when she arrived in Wisconsin with her parents from Belgium in 1855. A devout Catholic, Adele had a great devotion to the Blessed Mother and prayed daily. On Sunday, October 2, 1859, Adele was walking home through the woods when she saw a woman clothed in white standing between a hemlock and a maple tree. The woman was encased in a bright light and had a yellow sash around her waist.  A crown of stars was above her long, blond hair. Adele, filled with fear, began praying and the vision disappeared. She told her mom and dad about it and they told her that maybe it was a soul in need of prayers.

The following Sunday, Adele was on her way to Mass with her sister and another woman when she saw the apparition a second time. But her sister and friend, who were walking a bit ahead of her, did not see anything. As Adele returned from Mass, the Lady appeared to her for the third time. Adele, who had confided in her parish priest about the mysterious lady, did as he had told her. She asked the Lady the question, “In the Name of God, who are you and what do you wish of me?”

Adele was afraid. She knew little about her faith. She asked how she was supposed to do this with so little knowledge. The Blessed Virgin told her, “Teach them their catechism, how to sign themselves with the Sign of the Cross, and how to approach the Sacraments; that is what I wish you to do. Go and fear nothing, I will help you.”

Adele took the Blessed Virgin’s words to heart. She began her new, lifelong ministry of teaching children the Catholic faith by traveling on foot from house to house to instruct children in their homes. Adele’s dad, Lambert Brise, built a small wooden structure at the site of the apparition and a few years later, after Isabella Doyen donated five acres around the site, Adele started a small school.

In addition, a bigger wooden church was built and it was named Our Lady of Good Help. Adele and some other women formed a chapter of Third Order Franciscans; though she never took vows as a religious, Adele was known as Sister.

In the meantime the magnificent woodlands of Wisconsin were being harvested for their fine lumber. Mounds of sawdust and dried branches were being littered about with no sense of cleanup or conservation ever considered. Then came the evening of October 8, 1871. The Peshtigo Fire quickly exploded and began to devour the entire area with its rushing flames and heat. The firestorm began to head for Our Lady of Good Help.

People nearby the chapel were also heading there.There was never an accurate count but many people came, some even bringing their livestock. Sister Adele organized them and they all prayed the rosary. Outside the chapel they processed, holding high a statue of Mary pleading for her protection. The fire kept coming and the people moved inside the chapel and continued praying. Soon the fire raged all around the compound and the flames even arched over it. But the fire never touched the Chapel of Our Lady of Good Help or the people who were there.

More than one million acres were destroyed in the Peshtigo Firestorm. As far as the eye could see was total devastation. Yet, in the middle of it all, the Chapel of Our Lady of Good Help and the fenced property surrounding it were untouched. The property had been spared and no-one had been hurt, not even the animals. The five acres sat amid the charred landscape like an oasis in the desert. People who came and saw this incredible sight knew it was the Hand of God at work that night. The faithful had no doubt that the Blessed Virgin, Our Lady of Good Help, stood outside the chapel deflecting the raging inferno away from her children inside.

The story of Sister Adele and Our Lady of Good Help was always well known within the local culture and to the faithful but many considered it “urban legend.” That was because there was never an “official ecclesiastical judgment” rendered. Then, in 2009, the Diocese of Green Bay launched an official investigation. On December 8, 2010, on the Feast of the Immaculate Conception, a special Mass was offered on the site by Bishop David Ricken. At the Mass the bishop declared that the Marian apparitions seen there by Adele Brise were “worthy of belief.”

More to read: 7 Times the Virgin Mary Has Visited Mankind

[Bishop Ricken announced on Aug. 15, 2016, that the site in Champion has been formally designated as a national shrine by the U. S. bishops’ conference. -Ed.]