Pope Francis not slowing down despite Rome’s sultry August 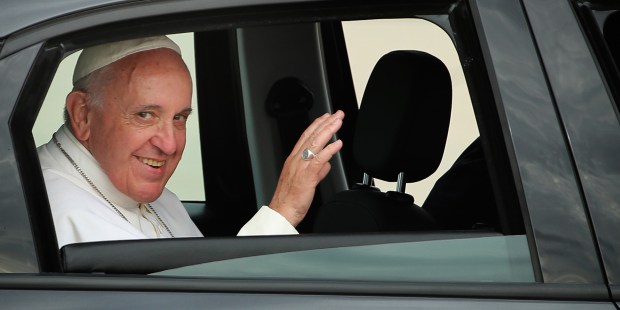 Chip Somodevilla/Getty Images)
JOINT BASE ANDREWS, MD - SEPTEMBER 22: Pope Francis waves from the back of his Fiat after arriving from Cuba September 22, 2015 at Joint Base Andrews, Maryland. Francis will be visiting Washington, New York City and Philadelphia during his first trip to the United States as pope. (Photo by Chip Somodevilla/Getty Images)
Share
Print
Aleteia | Aug 13, 2016

The month of August is generally a slow time in Rome, even in the Vatican. In recent decades popes have taken a bit of “downtime” in this month, to refresh themselves, catch up on reading (and maybe a nap or two) at Castel Gandolfo, in the scenic Lazio region.

Pope Francis never quite seems in need of such refreshment, and has yet to avail himself of the country breezes. This week he was especially busy. On Tuesday, August 9, Francis “sneaked out” of the Vatican to enjoy “a drive, a walk in the woods and lunch with an Italian bishop at a small convent”:

Long after the pope had returned to the Vatican from two small towns near Rieti – about 50 miles northeast of Rome – the Vatican confirmed the pope had made a “private visit” to the area.
According to Vatican Radio, Pope Francis was accompanied by Bishop Domenico Pompili of Rieti in his visits to a convent of the Sisters of the Reparation of the Holy Face in Carsoli and the Franciscan convent of St. Filippa Mareri in Borgo San Pietro…The pope greeted each of the sisters before heading to their chapel to pray with them and Bishop Pompili. After the prayers, the pope and bishop went for a walk around the wooded, park-like property, returning for lunch at noon sharp.

On Wednesday, Francis gave his usual audience, and then on Thursday he had lunch with 21 Syrian refugees who have been living in Rome since arriving with him following his trip to the Greek island of Lesbos on April 16.

“The Holy Father had lunch today at Casa Santa Marta with a group of 21 Syrian refugees who are now living in Rome, currently hosted by the Community of Sant’Egidio,” the new director of the Vatican Press Office, Greg Burke, announced at the start of the afternoon. “These are the families who arrived in Italy after the visit of Pope Francis to the island of Lesbos in Greece. The first group of refugees arrived with the pope in the flight on 16 April; the second arrived in mid-June. Both adults and children have had a chance to talk to Pope Francis about the beginning of their lives in Italy. The children gave the Holy Father a collection of their drawings, and the Pope exchanged toys and other gifts with them.”

More: Read the full, exclusive Aleteia series, Dispatches from Lesbos: What one American discovered about refugees while volunteering to help

On Friday, Pope Francis met with women who have been rescued from sex work and human trafficking.

Calling human trafficking “a crime against humanity” and “an open wound on the body of contemporary society, a scourge upon the body of Christ,” the Holy Father met 20 women rescued from the sex trade. They had been trafficked from countries of origin that included Romania, Albania, Nigeria, Tunisia, Ukraine, and Italy. All were severely abused during their captivity and are now living under protection.

The pope referred to his visit as a “Friday of Mercy” gesture, especially undertaken during the Jubilee Year of Mercy.

Wondering how you can participate more fully in the Year of Mercy? There are still many months remaining to avail yourself of some of these ideas. Or read Aleteia’s exclusive weekly series on “Practicing Mercy.”