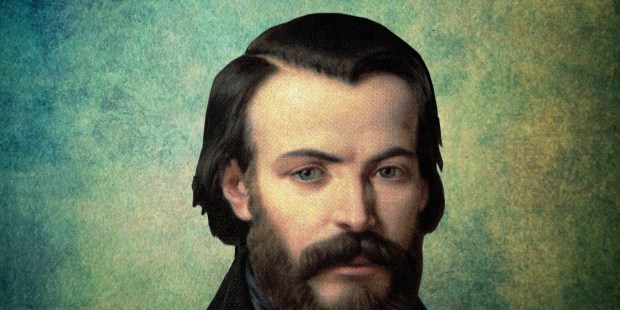 This is the first paragraph from the Mission Statement of the St. Vincent de Paul Society.

“Inspired by Gospel values, the Society of St. Vincent de Paul, a Catholic lay organization, leads women and men to join together to grow spiritually by offering person-to-person service to those who are needy and suffering in the tradition of its founder, Blessed Frédéric Ozanam, and patron, St. Vincent de Paul.”

So Frederick Ozanam is in fact the founder of the oldest Catholic charity in the United States of America.

Frederick was born in Milan, Italy, in 1813. He was the fifth of the 14 children of Jean and Marie Ozanam, and one of only three who lived into adulthood. The family moved to Lyons, France, and this was where Frederick grew up. As a teenager the young man was strongly influenced by the elitists of the day and his Catholic faith began to waiver. But Frederick fought his doubts and overcame them. Vowing to consecrate himself to the defense of his faith he moved to Paris. He was 18 years old.

Frederick entered the University of Paris and took up journalism. He made friends with some other young Catholic men and soon he and a few of his new friends were involved in vigorous debates with secular students who challenged their preaching because they did not put their words into action.

The secularists told them that maybe “long ago” the Catholic Church was a benefactor of humanity but that those days were over. What is the Church doing for people now, they scoffed. Frederick and his pals had no answer. They were laughed at and told they were hypocrites.

One of the group, Augustus Le Tailandier, asked Frederick if they might be able to put together a small group of Catholics to bring to action the Gospel message of “doing” instead of just ”talking.” Thus was born the “Conference of Charity.” This small group of Catholic/Christian young men would not only devote themselves to helping the needy but would also advance Christian friendship.

During this time, Frederick had been submitting articles to Joseph Emmanuel Bailly, who published the Tribune Catholique. He asked Mr. Bailly what he thought of their idea. He liked it so much that he joined Frederick and together they and four other young men held their very first meeting on April 23, 1833. Frederick Ozanam was 20 years old.

At that first meeting Emmanuel Bailly sent Frederick to see Sister Rosalie Rendu, a Daughter of Charity. Sister Rosalie became Frederick’s mentor and set him and his fledgling organization on its course by focusing them on doing “home visits” to those in need. This method of interaction was to become the primary way members would interact with those seeking their help. It remains that way to this day.

In the spirit of St. Vincent de Paul, the founder of her order, she also taught Frederick and his followers the techniques of helping the poor and the sick by being compassionate and always treating people with their God-given dignity. They invoked St. Vincent de Paul as their patron and named the group in his honor, calling it the St. Vincent de Paul Society.

Frederick Ozanam and his friends could never have dreamed of the way the Society would grow. Within 12 years from its inception it had spread to Italy, England, Belgium, Scotland and the United States. The Society chose St. Louis, Missouri, as its headquarters in America and the National Council of the St. Vincent de Paul Society USA is still located there.

Today in the United States there are more than 160,000 trained volunteers who provide almost 12 million hours of volunteer service helping those in need. There are close to 750,000 members doing volunteer work all around the world. And all of it was started by a 20-year-old kid responding to the graces showered down upon him and inspiring those around him to join in his quest to stop “talking and start doing.”

Frederick Ozanam was beatified on Aug. 22, 1997, by Pope John Paul II. His mentor, Sister Rosalie, was beatified on Nov. 9, 2003. We ask them both for their continued prayers for all of us, especially all those in need.