What? The kids learned that from us? High-five! 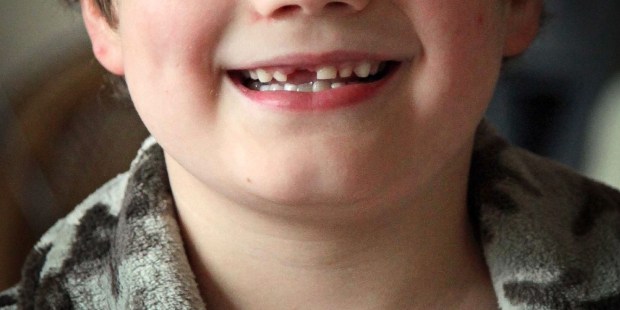 The pulsating pain radiating from my tooth and down my jaw was so intense I cried and curled up in bed. Tylenol and Motrin were no longer numbing the ache and I didn’t have an appointment with a specialist until 3 p.m. the next afternoon.

I tried not to think about the pain, but it was all I could think about.

I couldn’t function, I didn’t want to move my head. I just wanted sweet relief from the hell wreaking havoc in my mouth. The next morning, no babysitter was available to help me with my six children, so I begged my husband, John, to stay home.

He agreed and by 9:30 a.m., he had organized our brood to clean the house. While I lay in misery, I heard him issue chores and I listened as the kids vacuumed, swept, mopped floors, scrubbed toilets and dusted the furniture.

No one was crying. There was no back talking. No one yelled, “She hit me!” or “He took that from me!” All that was missing was a rousing chorus of Whistle While You Work.

While they were cleaning, my 7-year-old, Christopher, confessed he was disappointed the Tooth Fairy had not come to visit, even though he lost his tooth days before. (The Tooth Fairy is not only forgetful at our house, she never has any cash when she needs it. She could use a secretary.)

My three older children, who know the truth about the secret life of the Tooth Fairy, promised Christopher she would visit when he least expected it. They’d heard Christopher’s concerns and had decided to take matters into their own hands. While Christopher was out of the house later that morning, they went to the computer and typed up this note:

While you were gone, I took your tooth and left you a treat.

Then, they raided their piggy banks, scraped together $2.50 of their own money, put the note and the money in an envelope and secured it under Christopher’s pillow. My daughter sprinkled gold glitter all over Christopher’s bed for effect.

He was elated when he discovered the note. And the perpetrators of the good deed were beaming from generosity.

I pondered what inspired them to such a generous act until I had a realization: They served Christopher so selflessly because they witnessed their father doing the same thing for me. When I was incapacitated because of tooth pain, John did not complain about taking off work, like he could have; rather, he reorganized his day and took charge of the kids, no questions asked.

His willing attitude was a great example to my children. John’s generosity prompted my children to be generous themselves.

An oral surgeon had to pull my tooth, which was fractured and infected at the root. While I do not want to experience that kind of pain ever again, through it I realized that John motivates my children in a different way than I do, just as Saint Joseph probably operated in a different way than Mother Mary. Joseph cared for his pregnant wife, took Jesus as his own child, and he lead his family to safety in the midst of persecution. Both Joseph and Mary were needed, but the way they served their family was different.

It’s a relief for me to know I don’t have to set a perfect example because John’s witness, while different, is just as effective. And it’s amazing to observe the kids serve each other because they sometimes notice us doing the same.

A generous parenting model produces a trickle down effect!

The lesson almost makes me think the tooth pain was worth it.