C.S. Lewis and the chilling letters of Screwtape 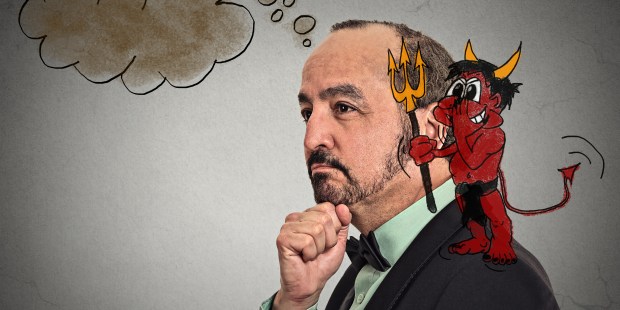 (the latest in the “Lights in the Darkness” series)

I remember it vividly.

“So what did you think?” I asked. My dad looked at me wearing concern on his brow and then past me. “It was chilling. I couldn’t read more than a few letters at a time. And then I would have to set it down.”

What collection of letters was he referring to?

The Screwtape Letters by C.S. Lewis.

Now, many know C.S. Lewis for his magical (and, oft-unrecognized, theological) Chronicles of Narnia which began most famously with The Lion, the Witch and the Wardrobe. But most readers are unaware of Lewis’ masterful works of Christian apologetics such as Mere Christianity, The Abolition of Man, and, of course, The Screwtape Letters.

Penned in 1942, The Screwtape Letters took the notion of guardian angels and turned it on its head. Instead of observing the proximate influence of heavenly angels on their faltering charges, we are granted an inner-worldly view of guardian demons intent on drawing their “patients” ever nearer to hell. While one may approach this book with the smirking conception of the whispering red devil on one shoulder and the correcting haloed angel on the other, be warned that the subtlety and attractiveness through which evil works is, indeed, chilling.

In one letter, the mentoring demon, Uncle Screwtape, advises his dim and incompetent nephew demon, Wormwood, on the trouble with argument in drawing his man away from God (referred to as “The Enemy”). Given that Truth is on God’s side, the Devil’s (referred to as “Our Father Below”) strategy is distraction, disdain and obfuscation. Just consider Screwtape’s advice,

The trouble about argument is that it moves the whole struggle onto the Enemy’s own ground. He can argue too; whereas in really practical propaganda of the kind I am suggesting He has been shown for centuries to be greatly the inferior of Our Father Below. By the very act of arguing, you awake the patient’s reason; and once it is awake, who can foresee the result? Even if a particular train of thought can be twisted so as to end in our favor, you will find that you have been strengthening in your patient the fatal habit of attending to universal issues and withdrawing his attention from the stream of immediate sense experiences. Your business is to fix his attention on the stream. Teach him to call it “real life” and don’t let him ask what he means by “real.”

Remember, he is not, like you, a pure spirit. Never having been a human (oh, that abominable advantage of the Enemy’s!) you don’t realize how enslaved they are to the pressure of the ordinary. I once had a patient, a sound atheist, who used to read in the British Museum. One day, as he sat reading, I saw a train of thought in his mind beginning to go the wrong way. The Enemy, of course, was at his elbow in a moment. Before I knew where I was I saw my twenty years’ work beginning to totter. If I had lost my head and begun to attempt a defense by argument, I should have been undone. But I was not such a fool. I struck instantly at the part of the man which I had best under my control, and suggested that it was just about time he had some lunch. The Enemy presumably made the countersuggestion (you know how one can never quite overhear what He says to them?) that this was more important than lunch. At least I think that must have been His line, for when I said, “Quite. In fact much TOO important to tackle at the end of a morning,” the patient brightened up considerably; and by the time I had added “Much better come back after lunch and go into it with a fresh mind,” he was already halfway to the door. Once he was in the street the battle was won. I showed him a newsboy shouting the midday paper, and a No. 73 bus going past, and before he reached the bottom of the steps I had got into him an unalterable conviction that, whatever odd ideas might come into a man’s head when he was shut up alone with his books, a healthy dose of “real life” (by which he meant the bus and the newsboy) was enough to show him that all “that sort of thing” just couldn’t be true. He knew he’d had a narrow escape, and in later years was fond of talking about “that inarticulate sense for actuality which is our ultimate safeguard against the aberrations of mere logic.” He is now safe in Our Father’s house.

The Devil exists. Know this well. And he works in the most subtle of ways. Smiling at us, providing us false comfort and assuring us in our selfish appetites. To underestimate him is to play directly into his hands.

The French poet Charles Baudelaire once wrote, “Dearly beloved, never forget when you hear anyone vaunt the progress of enlightenment, that the Devil’s finest trick is to persuade you that he does not exist.”

And, I would add, the Devil has been rather persuasive in the modern world.

To read C.S. Lewis’ The Screwtape Letters in their entirety, please consider purchasing the book here.