Unless you become like one of these: The Infant Jesus of Prague 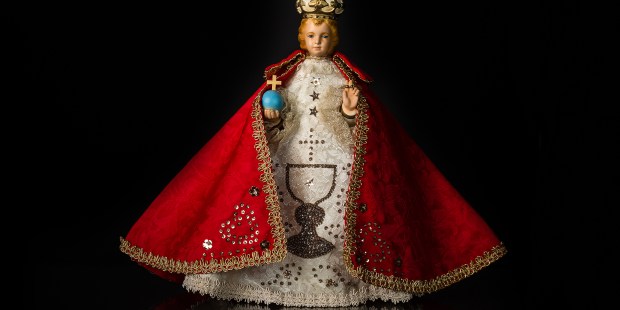 The little child in royal vestments wasn’t easily relatable to me, until one day…

As a Catholic who frequently writes about art, I’m very familiar with holy images that have become objects of popular devotion. One famous example is the beloved Infant Jesus of Prague, which arrived in Bohemia from Spain during the 16th century. Yet although I’ve always been well aware of this statue, it wasn’t until a moment of crisis in my own life that I really came to appreciate the Infant of Prague as something more than a pious devotional object.

A number of years ago, a good friend of mine went to the Czech Republic on vacation, and brought me back a figurine of the Infant of Prague from the Carmelite Church of Our Lady Victorious, where the original image is kept. This reproduction is quite small, standing only about 3 inches high, and is made of glazed and gilded porcelain. It depicts the Christ Child dressed in teal vestments, and wearing a crown that resembles a papal tiara. I placed it on my desk at work, more out of appreciation for the good friend who had given it to me than from a desire to reflect on the Christ Child. That all changed one day, during a moment of crisis.

At the time I was in a job where things had been deteriorating. The business had changed in a number of ways, and we were no longer suited to each other. I had already begun the process of searching and interviewing for a new position, when I got word one Friday morning that the big boss wanted to meet with me. I remember looking over at the tiny figure of the Infant of Prague on my desk and praying very briefly, “Okay, Baby Jesus. If there’s any way that you could give me a soft landing, I’d really appreciate it.”

An hour later I was unemployed.

During lunch that afternoon with a friend, I was surprised to find myself feeling strangely calm and unconcerned. I had just lost my job, and I had no idea what was going to happen next. Yet for some reason, I was completely sanguine about what had happened, and convinced that everything was going to turn out all right.

A few hours later, I got an email from a company that had heard I was now available, asking if I wanted to come in and interview on Monday. I did so, and was hired on the spot. It’s pretty hard to imagine having a softer landing.

Since then, I always keep an eye out for the Infant of Prague, whatever church I go into.

Certainly it would be easy to point to other causes for the speedy resolution of my crisis. One could argue that my professional reputation preceded me, for example, or that I was already in job-search mode and things just happened to click at the exact right time. As a rational, educated adult, there is no reason why I should think that a Spanish Renaissance sculpture of the Christ Child dressed as a king should have anything to do with my temporal and spiritual welfare. But He who is represented by that image was absolutely involved, and I came to see this was the case for two reasons:

First, even though I found myself in an undeniably adult situation, I sought a childlike solution to my problem. When children fall down, they bounce back up again fairly quickly, and are off running about and playing again soon afterwards. In my case, I didn’t ask the Christ Child to stop my fall from happening. Instead, I asked Him for that childlike grace of a speedy recovery after a fall, which is exactly what happened.

Second, I was given the grace to look at my life in that moment of crisis the way a child looks at theirs, without feelings of panic, or blame, or the like. Children don’t spend a lot of time wringing their hands over bad things that happened to them. Instead, they are very much in the here and now, and when they think about the future, they usually do so with some excitement. After turning matters over to the Infant of Prague, I found it almost astonishingly easy to walk away from the past, appreciate the present, and look forward to whatever was going to happen in the future, just as a child would do.

For centuries, many Christians have looked to the Infant of Prague as “a little child to guide them,” as the Prophet Isaiah says. He has been adopted as the Patron of many issues and causes, from schools to missions to vocations, and for good reason. Yet perhaps the best reason of all to turn to this image of the Christ Child is as a reminder to ask God for a more childlike faith. For as Christ Himself tells us, “Amen, I say to you, unless you turn and become like children, you will not enter the kingdom of Heaven.” (St. Matthew 18:3)