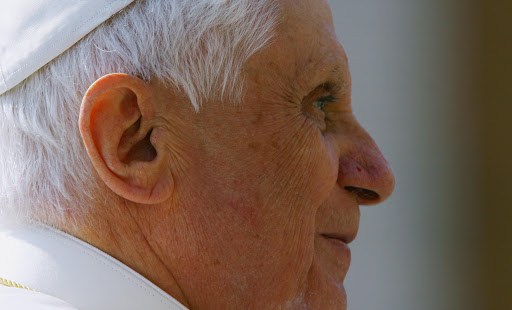 On the day the Church recalls the “Miracle of the Sun,” the Pope emeritus in a new reflection points us towards the true “sun” that enlightens the world

VATICAN CITY — “In orienting the liturgy towards the East” both Catholics and Orthodox desire — with the Lord — “to proceed towards the salvation of creation in its entirety,” Pope emeritus Benedict XVI said in comments published today.

His words came in a tribute to the Ecumenical Patriarch of Constantinople, Bartholomew I, on the upcoming 25th anniversary of his election, which appeared in the October 13 edition of the semi-official Vatican newspaper, L’Osservatore Romano.

The tribute, published on the 99th anniversary of the “Miracle of the Sun,” is part of a a new book (with a preface by Pope Francis) called: “Bartholomew: Apostle and Visionary, 25 Years of Guiding the Christian East.”

Lauding Bartholomew’s “love for creation and his commitment to it being treated in accordance with this love, in matters big and small,” the pope emeritus said: “A shepherd of the flock of Jesus Christ is never oriented only to the circle of his own faithful. The community of the Church is universal, also in the sense that it includes all of reality.”

He continued: “This is evident, for example, in the liturgy, which does not indicate only the commemoration and fulfillment of the saving acts of Jesus Christ. It is journeying toward the redemption of all creation. In orienting the liturgy towards the East (the Orient), we see that Christians, together with the Lord, desire to proceed towards the salvation of creation in its entirety. Christ, the Crucified and Risen Lord, is at the same time also the ‘sun’ which enlightens the world.”

Patriarch Bartholomew has carried out an essential aspect of his priestly mission “precisely through his commitment towards creation,” Benedict said, because “faith, too, is always directed towards the whole of creation.”

Benedict XVI’s praise of Bartholomew in this regard recalls the opening lines of Pope John Paul II in his letter to the Oriental Churches, Orientale Lumen: “The light of the East has illumined the universal Church, from the moment when ‘a rising sun’ appeared above us (Lk 1:78): Jesus Christ, our Lord, whom all Christians invoke as the Redeemer of man and the hope of the world.”

Unlike many Eucharistic liturgies in the Latin rite today, the Oriental churches more commonly follow ancient tradition and celebrate the divine liturgy facing East (the Orient), symbolizing Christ not only in his Cross and Resurrection but also in his second coming.

In An Exposition of the Orthodox Faith (Book IV), St. John Damascene (676-749) wrote that since God is ‘spiritual light’ and Christ is called in the Scriptures the ‘Sun of Righteousness’ and the ‘Dayspring,’ “the East is the direction that must be assigned to His worship” for “everything good must be assigned to Him from Whom every good thing arises.”

In his work Spirit of the Liturgy (Ch. 3), then Joseph Cardinal Ratzinger explained that despite the liturgical changes of the 20th century, “praying toward the east is a tradition that goes back to the beginning.” Moreover, he wrote, “it is a fundamental expression of the Christian synthesis of cosmos and history, of being rooted in the once-for-all events of salvation history while going out to meet the Lord who is to come again.”

More recently, in an address on the “authentic implementation” of the Vatican II Document on the Liturgy, Sacrosanctum Concilium, Cardinal Robert Sarah, Prefect of the Congregation for Divine Worship, invited all priests to celebrate the Mass ad orientem, suggesting the first Sunday of Advent this year as a fitting time to begin. In his address delivered last July, Cardinal Sarah said:

“I believe that it is very important that we return as soon as possible to a common orientation, of priests and the faithful turned together in the same direction—Eastwards or at least towards the apse—to the Lord who comes, in those parts of the liturgical rites when we are addressing God. This practice is permitted by current liturgical legislation. It is perfectly legitimate in the modern rite. Indeed, I think it is a very important step in ensuring that in our celebrations the Lord is truly at the center.

And so, dear Fathers, I humbly and fraternally ask you to implement this practice wherever possible, with prudence and with the necessary catechesis, certainly, but also with a pastor’s confidence that this is something good for the Church, something good for our people. Your own pastoral judgement will determine how and when this is possible, but perhaps beginning this on the first Sunday of Advent this year, when we attend ‘the Lord who will come’ and ‘who will not delay’ (see: Introit, Mass of Wednesday of the first week of Advent) may be a very good time to do this.”

In his written tribute, Benedict XVI recalled his first meeting with Bartholomew, aboard a train with Pope John Paul II to Assisi, for the 2002 prayer meeting for peace.

“I was immediately moved by the openness and personal warmth of the patriarch,” Benedict recalled. “It did not take great effort to draw closer to one another. His interior openness and his simplicity immediately inspired a lovely intimacy.”

Benedict also praised Bartholomew’s fluency in several European languages, and his mastery over Latin. “If one can converse with someone in one’s own language, there is an immediacy in speaking heart to heart, and mind to mind,” he said.

Taking account of the ecumenical patriarch’s rich and varied background, Benedict described his thought as “a journey with others and toward others, which certainly does not degenerate into a lack of direction, where simply ‘being on a journey’ would not lead anywhere.” To be deeply rooted in faith in Jesus Christ, Benedict reminded, “protects us from sliding into futility and from an empty game of vanity, because it keeps us in the truth, which belongs to everyone and wants to be the way for everyone.”

Recalling their first encounter, Benedict said he saw the Patriarch’s entire personality “on a journey toward a goal,” living “in encounter,” and sustained by the “fundamental encounter with the truth which is Jesus Christ.” The goal of all of these encounters, he said, “is unity in Jesus Christ.”

The pope emeritus said it was “particularly beautiful” that Bartholomew remained “personally close” after Bendict resigned as pope, and visited him and brought him mementos – “not only warm signs of our personal friendship, but also pointers towards unity between Constantinople and Rome, signs of hope that we are moving towards unity.”

Benedict XVI concluded by saying Bartholomew is a “truly ecumenical patriarch, in every sense of the word” and in fraternal solidarity with Pope Francis, “he is accomplishing further important steps on the path of unity.”

He asked that the Lord grant him “many years of blessed ministry as a shepherd in the Church of God” and ended by greeting him en philèmati haghìo [“with a holy kiss,” Romans 16:16 e 1 Corinthians 16:20].