Differences do matter: Catholics are a long way from uniting with the Lutherans 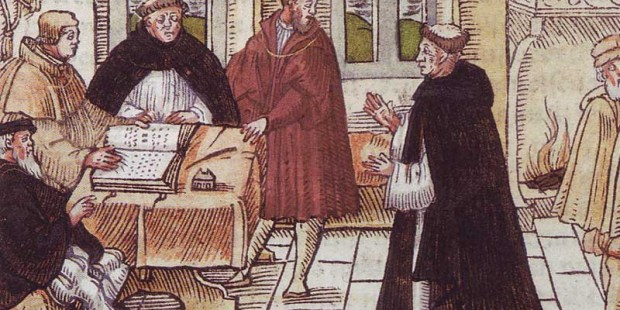 In spite of recent steps towards reconciliation, doctrine still remains an obstacle to unity

At the end of October Pope Francis will travel to Sweden to join a Lutheran World Federation observance opening the 500th anniversary year of Martin Luther’s break with the Catholic Church and the start of the Protestant Reformation.

The Pope’s generous gesture will dramatize how far Catholics and Lutherans have come in recent years in reconciling their differences—but also the distance they have yet to travel to restore unity.

Among the recent indicators of progress already made, Francis’s trip joins the publication of a German Catholic bishops’ conference document calling Luther a “teacher of the faith.”

Indeed, Luther undoubtedly was that, yet he was also something considerably more complex.

The complexity is suggested by historian Christopher Dawson’s description of the tempestuous Augustinian as “a man of titanic power and energy, who combined… the vernacular eloquence of the demagogue with the religious conviction of the prophet.”

A teacher he certainly was, driven by a craving for fidelity to what he took Scripture to mean and incensed at what he regarded as—and what often enough were—abuses existing within the Catholic Church of his day.

But even so, Luther championed doctrinal and practical innovations of his own. So did other Lutherans, Calvinists, Anglicans, Anabaptists and the ever-growing crowd of other new sectarians who took the path he opened up.

Now the principle of sola scriptura—Scripture as the sole rule of faith—became a principle of disunity. As Brad Gregory of Notre Dame explains in his important study The Unintended Reformation (Harvard University Press), from the earliest years of the Reformation the reformers disagreed among themselves about Scripture’s meaning and in doing so produced a wide range of conflicting truth claims.

Today, to speak of Lutheranism as if it were a single faith community would be misleading. Leaving it to Lutherans to sort out the relationships among them, I note that in the U.S. alone there are at least three principal Lutheran bodies. The Evangelical Lutheran Church in America is the largest and most liberal group but not the only one. Each distinguishes itself from the others in doctrinal and practical terms.

At a time when sentimentality sometimes undermines ecumenical thinking, there are those who ask what difference doctrinal differences among Christians make—isn’t God pleased with all of us? The question deserves to be taken seriously, since a certain amount of doctrinal diversity on open questions is not only tolerable but, up to a point, desirable.

Still, beyond that point, wherever anyone situates it, differences do matter. The New Testament itself is full of stern warnings against false teaching and false teachers who, as Paul says in the letter to the Romans—a document Luther greatly esteemed—“create dissensions and difficulties, in opposition to the doctrine which you have been taught” (Rom 16.17).

Representatives of the Evangelical Lutheran Church and the U.S. Conference of Catholic Bishops last year published a joint statement citing numerous issues where they said “church-dividing” differences no longer exist between ELCA and the Catholic Church.  But on other issues—among them ordination, including the ordination of women, the papacy, and moral questions like abortion—they conceded that disagreements continue to separate Lutherans and Catholics.

If doctrine is important—and it is—then leaders on both the Catholic and Lutheran sides have plenty of work to do before the unity shattered five centuries ago is restored. As Pope Francis’s gesture shows, the quest for unity has come very far. But let’s not deceive ourselves—it has a long way to go.