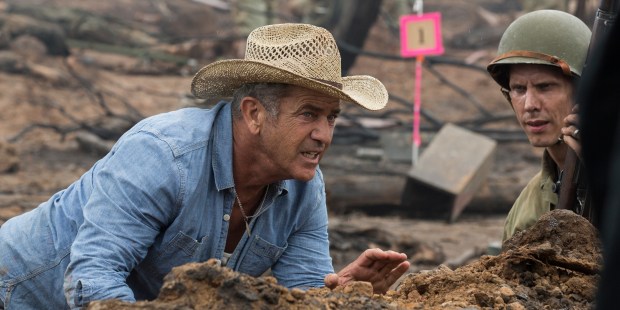 Not all of the inspiration for Hacksaw Ridge came from World War II conscientious objector Desmond T. Doss. Director Mel Gibson also looked to a later hero—one whom he himself portrayed in We Were Soldiers—to bring Doss’s story to life for a new era.

“I remember going with Gen. Harold Moore, who was in the Ia Drang Valley [battle in Vietnam],” Gibson said in an exclusive interview with Aleteia prior to the New York premiere of Hacksaw Ridge Wednesday. “He took me to visit the graves of the boys that he felt he was their dad…. He lost some guys. He would go and visit their graves every day. He would talk to them. But he wouldn’t talk to them like they were dead; he would talk to them like they were alive. It was amazing. I mean, I was choked while he was doing that stuff. I was like—I lost it. And of course, he had tremendous survivor guilt, and he felt like a parent who’d lost his children, and he was there really praying for them and talking to them. It was an amazing thing for me to watch that.

“So I felt that Hugo [Weaving, who played Doss’ father in Hacksaw Ridge] sort of had a version of that, but it was more damaged,” Gibson said.

The two-time Academy Award winner said that aside from the main theme of Hacksaw—a young soldier’s fidelity to his convictions—he wanted to remind audiences of the devastating effects war has on combatants and those around them. Doss’s father deals with his post-traumatic stress disorder through drunken, one-sided conversations in the local cemetery, where the friends he knew from childhood are buried. He survived the World War I battle that killed them, but his own family bears the brunt of his persistent “battle fatigue,” as PTSD was once called.

Battle fatigue, in fact, may be the reason why Doss’s story has not been well known until now. Gibson kept referring to Doss’s humility as the reason he never agreed to Hollywood telling his story. But he may very well have been like so many other veterans, who simply do not want to talk about what they witnessed, especially in a contest as horrific as the Battle of Okinawa.

“They tried to get the rights to his story back in 1948 with [producer] Hal Wallace, and then they sent Audie Murphy to twist his arm to see if they could shake the rights loose, but he just wanted to grow vegetables and stay in the tool shed and say his prayers,” Gibson said.

Hacksaw Ridge stars Andrew Garfield as Desmond Doss, a Seventh-Day Adventist and conscientious objector who was awarded the Congressional Medal of Honor for his heroism in saving some 75 lives in the midst of heavy fighting on Okinawa. The independent film was shot in Australia in 59 days with a budget of just $40 million.

Gibson said that because Doss disregarded his own safety on behalf of his fellow soldiers—even those who persecuted him for his belief that using a gun was wrong—his film is more of a “love story” than a war movie.

But to drive that point home, the film is unsparing in its depiction of violence on the battlefield. Gibson said that he had a vision for the film of something like a Norman Rockwell painting “jammed up against an Hieronymus Bosch painting.”

“You have ideal, sweet innocence, and then you have Hell,” Gibson said during a panel discussion at the Sheen Center for Thought & Culture, a forum for discussion and the arts run by the Archdiocese of New York. “And you take the same people into the other painting. It’s the death of innocence. It’s Hell. I want to give people an idea of what that feels like, and what our veterans and indeed what the guys now, even today, they suffer [after being] in combat situations. … I wanted to accentuate who Desmond was in the midst of this maelstrom of violence that reduces men to the level of animals. This guy just maintained his equilibrium and kept his faith. He was armed only with faith, and no weapon. And he went in and put his life on his line again and again.”

Pulitzer Prize-winning playwright Robert Schenkkan spoke of challenges he had in telling the Doss story.

“I think there’s a temptation here to turn Desmond into a secular saint, and I think that that would be a terrible mistake because it would do him and his faith a disservice,” Schenkkan said in an interview. “Desmond’s faith was hard-won, hard-earned, and gravely challenged up there on the Maede Escarpment. There was no certainty—nothing that said ‘Oh, this is how things will work out.’ He was terrified, as they all were, and I’m sure he had doubts. And yet, and yet, he continues, and accomplishes this extraordinary act of generosity and self-sacrifice, and that to me was the important thing I wanted the audience to feel, that Desmond is not so far from what they could be if they shared that kind of conviction and had that kind of principles, that it is possible to achieve greatly, for all of us or any of us, to get past our own fears, our own doubts and to achieve.”

The Pulitzer Prize winning author was happy his script was in Gibson’s hands.

“He is a phenomenal filmmaker, truly he’s a gifted filmmaker, as well as a terrific actor and a very good writer in his own way,” he said. “Mel understands story and structure elements, which made it very easy to work with him. But what he brings to this are two things: one is a really unique, brilliant visualization, the ability to see this thing. I can write an action sequence, and I try to be very precise about it, but the shooting of it, to accomplish what he did on the schedule he had, the budget he had, it’s really extraordinary.”

“The second thing I would say is he’s a real actor whisperer,” Schenkkan continued. “He’s really able to get an extraordinarily delicate and nuanced performance out of his actors. That’s not a given. Casting is critical. We had a great cast, but then he really took them to another place.”

On a different subject, Gibson told Aleteia that he is working on a “sequel” to his 2004 blockbuster The Passion of the Christ, which will explore the resurrection.

“It’s probably about three years away,” he said. “But that’s not an easy thing. That’s no easy matter. Because there’s no point in just doing some linear thing that you read in the Bible. You have to look at that but you have to make it, you have to give it some underpinning. And that’s not easy.”

Appearing on The Late Show with Stephen Colbert this week, Gibson went into more detail.  “What are the other things around [the Resurrection] that happened?” he asked, suggesting where the story line might lead.

When Colbert asked whether there would be any “bad guys” in the film, Gibson said yes, but that “they’re in another realm.” And then Colbert admits that “there’s a lot of action happening off-screen in the Bible of Jesus descending to the dead.”

To which Gibson replies, “Sure, there’s a lot happening around us right now.”