The Eureka moment I had watching “The Office” 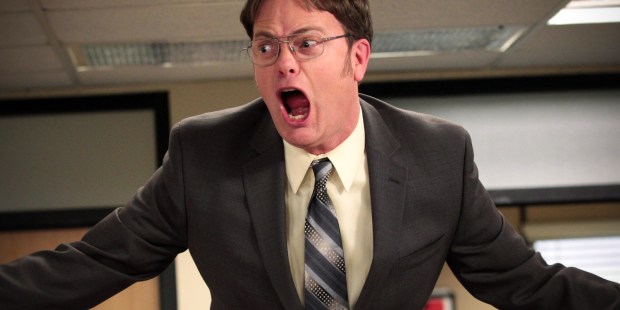 Once you get to actually know someone, it’s harder to hate them. A lesson for our times?

I once tried watching an episode of The Office in the middle of the show’s third season. I absolutely hated it. I don’t know why exactly, but I think it had to do partly with some inappropriate comments as well as the “mockumentary” style of the show.

Years later, during the first 12 hours of labor with my first baby, my husband and I started watching the show from the beginning. He had expressed a desire to see it and, since he had served me so willingly throughout the difficulties of my pregnancy, I thought giving the show a second look with him was the least I could do. We made it through the first season, and half of the second, before labor picked up an my attention was needed elsewhere.

The result of this second attempt? I loved it. Every single moment of it. Yes, I was embarrassed for characters when they were making fools of themselves. And I didn’t enjoy the inappropriate comments any more than I had years before. But something interesting happened. I began to love each of the characters.

I once read a book by Mother Mary Francis, PCC, in which she said, essentially, that we can never dislike someone whom we truly know. I’ve thought a lot about this over the years. People annoy and frustrate us and sometimes we miss seeing another human being for the majestic creation that he or she is. Yet, if we could see the immense beauty of each person just as easily as we see the beauty of a sunset or a flower, the world would be a much more peaceful and happy place.

It took me years to put it all together, but I ended up realizing (after having watched the entire series of The Office several times) that I hadn’t come to love the show’s characters despite their faults, but because of their faults — of the tendencies and idiosyncrasies that made up who they were and even sometimes drew them into wrong behavior. They were wounded. They had faults. They had thousands of painful and happy and troubling experiences that shaped who they were and who they would become.

And in many ways, they were just like me. And my husband. And my siblings and my friends. And it was from watching The Office from the beginning, becoming acquainted with the back-stories of each of these characters, that I felt like I really knew them and therefore couldn’t help but love them.

Of course, real life is messier, and not quite as comical. But if we can learn to truly get to know people, we might find ourselves unable to dislike, much less hate, them.

That falls in line with what Pope Francis has said about meeting people where they are. How do we bring the love of Christ to people we can’t be bothered to know?

It also falls in line with what some writers are learning as they try to get to know and understand the people who voted differently than they did on November 8. Guess what? Once they get to know them a little, they couldn’t hate them anymore.