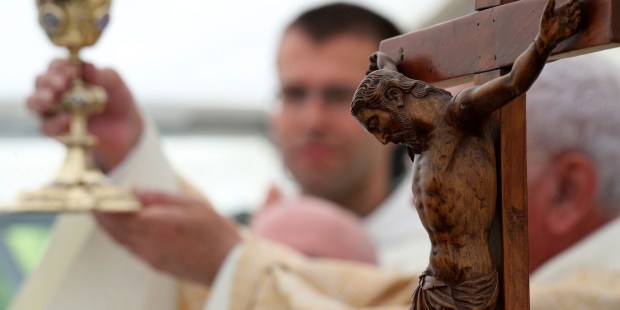 What kind of king is this?

You cannot plumb the depths of the human heart or grasp the workings of the human mind; how then can you fathom God, who has made all these things, or discern his mind, or understand his plan? No, my brothers, do not anger the Lord our God.
—Judith 8:14

Today we celebrate the Solemnity of Christ the King. We gaze upon him crowned with thorns and worship him on the throne of the Cross and it wouldn’t take much to wonder: what kind of king is this?

I wonder if we’re not too used to the story to realize what it means. We give out Christmas cards with a sweet little calf standing by an immaculate manger and forget that the first Christmas was anything but pristine. We’re so steeped in Christian imagery that we overlook the shocking condescension of a God made man for the salvation of sinful man.

And if we’re honest, we might be willing to admit that we don’t think much of his plan. Better to come in majesty with trumpet blasts than in decades of obscurity. Better to triumph by sending angels to rule victorious over Satan and his sorry crowd than to claim your kingdom with your life’s blood. Wouldn’t it have been better if Jesus had given more instruction on how the Church ought to be structured, more detail on modern ethical questions, more healing and less talk of sin?

But God would not be God if he were God the way you would be God if you were God.

Most of us probably wouldn’t edit the Incarnation out of history, or even the Passion and death of God. We might be too faithful to criticize the way Jesus conducted his public ministry. But we’ve got plenty to say about what he’s been doing since.

We take issue with death and disease and war and traffic and cavities and football scores. We demand answers to our prayers and when we don’t get what we expected, we’re tempted to deny him or resent him when really it’s just that we’ve forgotten what Judith knew so well: God is beyond you. He’s working, even when you can’t see how. In his Providence, a Cross is a throne and a crown of thorns is studded with gems.

It would have been tempting to join with Peter in promising to fight when Jesus predicted his shameful death. It would have been tempting to demand that the innkeeper make room, to start roughing up the jeering crowd because they couldn’t see the majesty hidden behind the bruised face of the God-man. God didn’t come to rule in splendor but in meekness, though. He came a servant and in serving he conquered.

Today, we celebrate a bloody God who reigns defeated. We look on an image of utter defeat and praise his victory. Perhaps instead of cajoling and berating, we should offer him the broken uselessness of our lives and our families and our country and pray with fervor, “Thy kingdom come.”

When we consecrate ourselves to Christ as King, we consecrate our whole lives—our checkbooks, our politics, our bedrooms, our Twitter accounts, everything. And we ask him to reign not as he reigns in heaven but as he reigned from the Cross. It may not make sense to us now, but one day, God willing, we will see how to serve is to reign and to suffer is to triumph. May Christ be king in all our lives.