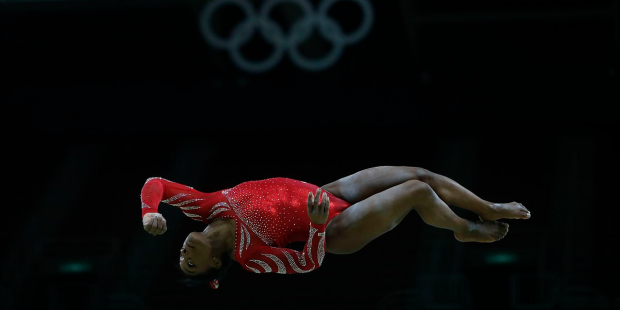 The gold medalist reveals she took St. Sebastian as her patron saint for Confirmation

Simone Biles, four-time Olympic gold medalist and fan favorite of the Rio Olympics, recently completed a 36-city tour promoting her new autobiography, Courage to Soar. In it she describes the many struggles she had to overcome to reach the Olympics and become one of the most talented athletes of all time.

However, the book does not only highlight the training and sacrifices that she had to make, but also the role her Catholic faith played in driving her to success.

Biles said recently in an interview with the Houston Chronicle, “Kids today talk about faith, and I think it’s OK for me to share my faith so kids can see how it helps you through the whole process.”

During the Olympic games in Rio, Biles revealed to Us magazine the contents of her gymnastics bag and the reporter noticed a white rosary that fell out. Biles explained, “My mom, Nellie, got me a rosary at church. I don’t use it to pray before a competition. I’ll just pray normally to myself, but I have it there in case.”


In her autobiography Biles expands on her Catholic faith and relates in one of the chapters her experience receiving the sacrament of Confirmation, “I marched into St. James the Apostle Church that Sunday in a line of teenagers with solemn faces… in a way, our procession reminded me of a medal ceremony, except that no gold, silver, and bronze medals would be given out. Instead, our prize would be something much more powerful: in a few moments, each of us would bow our heads to receive the Holy Sacrament of Confirmation.”

As she watched her fellow classmates receiving the sacrament Biles thought about the patron saint she chose, Saint Sebastian, and how he is often invoked by athletes to help recover from injuries. At the time she was recovering from an injury and the consolation she felt was exactly what she needed at that point in her life.

Biles does not go out of her way in the book to mention her Catholic faith in order to evangelize; it is simply part of her life and has always been there. The Church has helped her through many trials and so her autobiography naturally incorporates it throughout the pages.

As another example, the death of a close relative greatly impacted her childhood years and during the funeral she was deeply moved by the hymn, “Here I Am, Lord.” It instantly became her favorite hymn and helped her in the grieving process.

After a short break from traveling, Biles plans to head out on the road again to promote her book as she looks forward to the next Olympics. She told USA Today, “I’ll take some time off first but then I’ll get back at it and try for 2020.” While it is hard to improve upon four gold medals, Biles said in the interview, “I think anyone can get better as long as you put your mind to it… You set new goals. So I don’t know if I can but I would hope I can.”