The sin-eaters and the lost sacraments 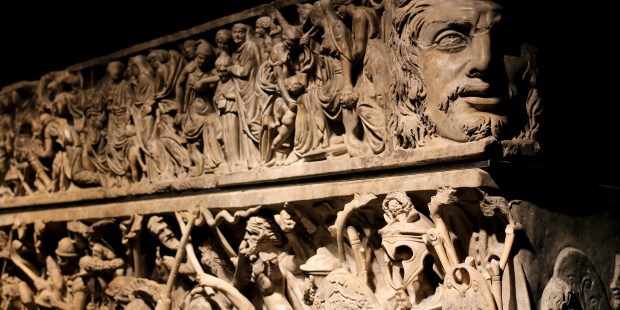 What happens when Catholicism is taken away

When he finished eating, the man would “pronounce, with a composed gesture, the ease and rest of the Soul departed, for which he would pawn his own Soul.” That “would” seems to have meant “had.” The man was a sin-eater.

It was “the worst paid freelance gig in history,” as the entertaining website Atlas Obscura put it in a recent story. The sin-eaters provided the good people of the town with a Get Out of Hell Free card. They were apparently common in Wales and western England in the 16th and 17th centuries and perhaps later.

The sin-eaters also provided, by the way, the title for the first novel by the too-little-known Welsh Catholic novelist Alice Thomas Ellis.

“The family who hired the sin eater believed that the bread literally soaked up their loved one’s sins,” Atlas Obscura explains. “Once it was eaten, all the misdeeds were passed on to the hired hand. Once the process was complete, the sin-eater’s own soul was heavy with the ill deeds of countless men and women from his village or town.” In southern Wales, he also got ale, and in northern Wales, milk.

The sin-eaters were poor and paid very little, though one source complains that they were unbelievers who just wanted an easy buck and a free meal. According to the Encyclopedia of Religion and Ethics, one 19th-century observer reported that when the sin-eater finished, he “vanished as quickly as possible from the public gaze; for as it was believed that he really appropriated to his own use and behoof the sins of all those over whom he performed the ceremony, he was utterly detested in the neighborhood — regarded as a mere Pariah — as one irredeemably lost.”

The poor sin-eater assured people (as they thought) their entry into Heaven, and for that he was hated. As Oscar Wilde noted, no good deed goes unpunished.

It must have been a very useful system, since you could do anything knowing that after you died some poor man would take the punishment for you. The Atlas Obscura writer observes that the people “adapted their own morals to accommodate the practice.”

It was also one of the worst abuses of the poor one can think of. The most brutal factory owner never asked the poor he exploited to damn themselves on his behalf. I suppose the sin-eater solved even that problem, because he would absorb all your sins, including that of abusing sin-eaters.

It’s an historical curiosity, but I bring it up because of something even the Atlas Obscura writer notices. Sin-eating seems to have developed as a substitute for the Catholic beliefs and sacraments the English Reformers had stripped from the people.

As Ruth Richardson explains it in Death, Dissection and the Destitute, the laity maintained some beliefs and practices once accepted by the theologians and the Church but since rejected. The officials (with a few exceptions like St. John Fisher during the English Reformation) found it easy to move with the times. The people for the most part didn’t.

This was especially true of the rituals following death, a century or more after the Reformation rebuilt the religious life of the people. In sin-eating, she sees the survival of “a vague belief in an intermediate form of limbo or Purgatory between death and judgment” and “the assumption by survivors of an ability to affect the fate of a departed soul.”

The people no longer knew much if anything about the cleansing state of Purgatory, nor the consolation of the last rites, of indulgences, and of Masses and prayers for the dead. They also had a dim memory of the requiem Mass, or a communal, symbolic but effective meal associated with burial. They wanted these things they didn’t remember and eventually evolved a bad imitation as a substitute.

Paganism from paganism, some of my more theological Protestant friends would say. The Catholic belief and practice on these matters is paganism given a Christian form and so of course the degenerated form would be even more pagan. Catholics, with our Purgatory, Masses for the dead, and all that — we’re no different from the pagan bringing his sacrificial chicken to a priest at a roadside temple, hoping for rain or healing.

Paganism always tempts man. True. But Catholicism is not paganism. Our Mass is a sacrifice not because we are pagans, but because man is a sacrificial creature, and the God who created us that way has given us the true and perfect sacrifice.

Man will have a dim memory, if their culture was once Catholic, or perhaps a hopeful intuition, if it was not, of a chance after death to be cleansed of their sins, and of ways the living can help the dead. That is a good news we seek. We find it when we find the Gospel. The horror of sin-eating shows what happens when the gifts of God given through the Catholic Church are taken away.

Similar practices can be found elsewhere. Richardson, in Death, Dissection and the Destitute, records a belief found in Yorkshire in the 1890s: “When you drink wine at a funeral every drop that you drink is a sin which the dead person has committed. You thereby take away the dead [person’s] sins, and bear them yourself.”