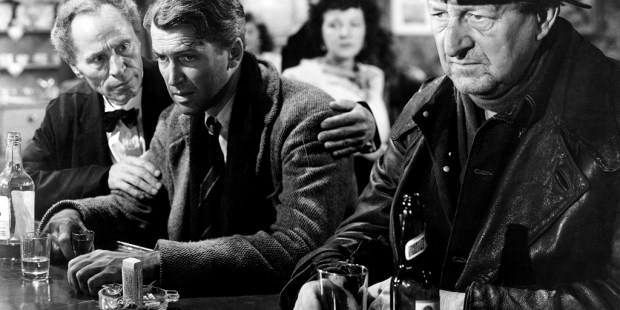 “It’s a Wonderful Life” shows us a flawed man who transcends himself, and we recognize in him our own wish to do the same

One of the best things about this season is that, invariably, someone writes about It’s A Wonderful Life, and muses on the complex, sometimes dark character of George Bailey.

Portrayed so perfectly by the perpetually likable James Stewart, it is easy to miss the fact that George Bailey is not a simple and good-natured cornpone from upstate New York; he is a man whose heart and faith are essential to him, because they balance out a real bitterness that shows itself in little ways. A man who has had to cast aside every dream in order to do “the right thing,” Bailey is — thanks to an old injury — denied even dubious adventure of soldiering during World War II. Watch him spit in disdain at himself and his situation, after he has responsibly handled a blackout drill in his neighborhood. When the big man from the small town comes beeping by in a slick, shiny car with a shinier woman, see George Bailey’s lip curl, not because his wife is wearing a baseball cap and sitting in his old clunker, but because she is so clearly content with the cap, and the clunker, and with comfortable, sacrificing, trapped old George, who always wanted so much more. He adores his wife; he wants what she wants, but why doesn’t she want more?

He kicks the car door.

George Bailey, who is a very good man living by what our post-Christian era might consider “quaint” morals, is deeply distressed. He loves much. He hates, too. Where there is great goodness, there is always equal potential for badness and mayhem, and it is a testament to James Stewart’s talent, and Frank Capra’s direction, that we barely notice Bailey’s flaws for all his good points. The truth is, though, that Bailey’s flaws are what define him; they challenge him, constantly, to transcend his own instincts. Subconsciously, I think we see the man in full — good and bad, light and dark — and recognize ourselves in him.

A few years ago, in an interesting piece at First Things, Joe Carter compared George Bailey to the Randian hero, Howard Roark, calling “It’s A Wonderful Life” The Fountainhead of Bedford Falls:

While both represent the artistic, ambitious, talented individual who is surrounded by stifling mediocrity, each character’s story unfolds in dramatically different fashion. Rand portrays Roark as a demigod-like hero who refuses to subordinate his self-centered ego for the wishes of society. Capra, in stark contrast, portrays Bailey as an amiable but flawed man who becomes a hero precisely because he has chosen to subordinate his self-centered ego to society.

Both men suffer, but one has suffered with the whole world, and the other has suffered only for himself. One man permits Christ to live within him.

When one considers George Bailey, and our own mended and re-broken, hopeful hearts, the scripture readings in this season keep us airborne:

Thus says the Lord GOD:
But a very little while,
and Lebanon shall be changed into an orchard,
and the orchard be regarded as a forest!
On that day the deaf shall hear
the words of a book;
And out of gloom and darkness,
the eyes of the blind shall see.
The lowly will ever find joy in the LORD,
and the poor rejoice in the Holy One of Israel.

And then to meditate on this:
The reason why we must hope in God is chiefly the fact that we belong to him, as effect belongs to cause. God does nothing in vain, but always acts for a definite purpose . . .
— St. Thomas Aquinas

And to finally remember this: I fancy that hope is the last gift given to man, and the only gift not given to youth. Youth is pre-eminently the period in which a man can be lyric, fanatical, poetic; but youth is the period in which a man can be hopeless. The end of every episode is the end of the world. But the power of hoping through everything, the knowledge that the soul survives its adventures, that great inspiration comes to the middle-aged: God has kept that good wine until now.”
— G.K. Chesterton, Charles Dickens, Last of the Great Men

It took George Bailey a while to understand that. And the rest of us, too, probably.