The pontiff and the dictator: What St. John Paul II told Fidel Castro and the Cuban people 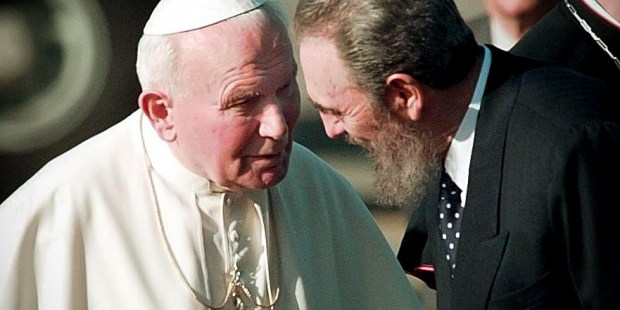 The crowds loved him — at risk to their own lives.

His face, once so ebullient, had become lined and fixed by the progressive effects of Parkinson’s disease. He was stooped and slower than the energetic man “from a faraway land” who had emerged on to the balcony of St. Peter’s Basilica 20 years earlier.

His counterpart looked otherwise. Though gray and likewise lined, his hair and beard were meticulously coiffed. His dark suit, a rare exchange in place of his perennial military attire, was perfectly tailored. He was trim and wide-eyed. His feigned humility was overshadowed by a haughtiness borne of nearly 40 years of ruthless power.

And now they were together in Cuba’s famous Jose Marti Plaza at Mass: the pontiff and the dictator.

In 1998, Cuba’s iron-fisted ruler, Fidel Castro, was on the cusp of his 40th year in power. The dream of Communism had long since devolved to cynical cronyism, suppression of civil liberties, torture and summary executions. Flags always waved longer, smiles always shone brighter, crowds always behaved better under Castro lest draconian punishments be exacted.

Simultaneously, John Paul II, the Servant of the Servants of God, had crisscrossed the Earth to champion the oppressed, challenge the comfortable, articulate the Truth and reacquaint the lost with the loving Grace of Jesus Christ.

Castro’s ruthless regime had outlived eight American presidencies and even its sponsor state, the originator of Communist Revolution, the Soviet Union. His nefarious deeds were enacted with impunity. He could strut and preen in his willfulness. Who could touch him?

Soon, the Mass began and before long, the Pope’s homily. Below are some excerpts:

Dear brothers and sisters: the Church is a teacher in humanity…

The Church, in carrying out her mission, sets before the world a new justice, the justice of the kingdom of God (cf. Mt 6:33). On various occasions I have spoken on social themes. It is necessary to keep speaking on these themes, as long as any injustice, however small, is present in the world; otherwise the Church would not be faithful to the mission entrusted to her by Christ. At stake here is man, the concrete human person. While times and situations may change, there are always people who need the voice of the Church so that their difficulties, their suffering and their distress may be known. Those who find themselves in these situations can be certain that they will not be betrayed, for the Church is with them and the Pope, in his heart and with his words of encouragement, embraces all who suffer injustice.

After a long burst of applause, the Holy Father said:

I am not against applause because when you applaud the Pope can take a little rest!

On the threshold of the Year 2000, the teachings of Jesus maintain their full force. They are valid for all of you, dear brothers and sisters. In seeking the justice of the kingdom we cannot hesitate in the face of difficulties and misunderstandings. If the Master’s call to justice, to service and to love is accepted as good news, then the heart is expanded, criteria are transformed and a culture of love and life is born. This is the great change which society needs and expects; and it can only come about if there is first a conversion of each individual heart, as a condition for the necessary changes in the structures of society.

“The Spirit of the Lord has sent me to proclaim release to the captives … to set at liberty those who are oppressed” (Lk 4:18). The Good News of Jesus must be accompanied by a proclamation of freedom based on the solid foundation of truth: “If you continue in my word, you are truly my disciples, and you will know the truth and the truth will make you free” (Jn 8:31-32). The truth of which Jesus speaks is not only the intellectual grasp of reality, but also the truth about man and his transcendent condition, his rights and duties, his greatness and his limitations. It is the same truth which Jesus proclaimed with his life, reaffirmed before Pilate and, by his silence, before Herod; it is the same truth that led him to his saving Cross and his glorious Resurrection.

A freedom which is not based on truth conditions man in such a way that he sometimes becomes the object and not the subject of his social, cultural, economic and political surroundings; this leaves him almost no initiative for his personal development. At other times that freedom takes on an individualistic cast and, with no regard for the freedom of others, imprisons man in his own egoism. The attainment of freedom in responsibility is a duty which no one can shirk. For Christians, the freedom of the children of God is not only a gift and a task, but its attainment also involves an invaluable witness and a genuine contribution to the journey towards the liberation of the whole human race. This liberation cannot be reduced to its social and political aspects, but rather reaches its fullness in the exercise of freedom of conscience, the basis and foundation of all other human rights.

The crowds began shouting: “The pope is free and wants us all to be free,” the Holy Father replied:

Yes, he lives with that freedom for which Christ has set you free.

With these words, an ailing saint heartened an oppressed people and called a strongman to account. From the aging pontiff came words strikingly reminiscent of the younger shepherd galvanizing his own oppressed Polish homeland in 1979. There was strength in his words. And Truth. The frail pope smiled. And the crowds loved him – at risk to their own lives.

Fidel Castro is now dead, as is the beloved St. John Paul II.

Surely, the haughty dictator must have once asked, “Who can touch me? Who?”

The answer is now clear.

Christ, his Church and a once ailing Saint.