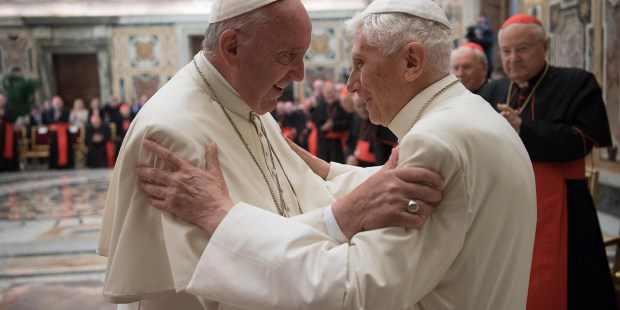 The pope emeritus first offered birthday greetings in a “very warm” written message that was “particularly appreciated,” according to the Vatican. Then, in the afternoon, the pope emeritus called Francis personally.

Benedict XVI also sent Pope Francis three gifts which were received “as three very personal and meaningful signs” for them both. The Vatican has not said what the gifts are.

The pope began his 80th birthday by inviting 8 homeless people, two women and six men, to his residence at Santa Marta. The 8 guests of various nationalities — four Italians, one Moldovan, two Peruvians and one Romanian — all live around St. Peter’s Square. They were accompanied by the papal almoner, the Polish Archbishop, Konrad Krajewski.

The pope welcomed his guests at 7:15 a.m., greeted each of them personally, and thanked them for the three bouquets of sunflowers they offered him for his 80th.

He then invited them for breakfast in his dining room, and spent a half an hour talking with, before departing for the Pauline Chapel in the Apostolic Palace, where he celebrated Holy Mass with cardinals residing in Rome.

The rest of the pope’s day was “normal” for the most part. The Holy Father was particularly delighted at the presence of so many children and young people at an audience with Italian lay community of Nomadelphia [Greek for “law of brotherhood”].

Throughout the day, Pope Francis also received telephone calls and telegrams from various world leaders, the Vatican reported. He also received more than 70,000 from all over the world, with birthday wishes. The most numerous were sent in English, Spanish, Polish and Italian.