Why caring for refugees is a pro-life issue 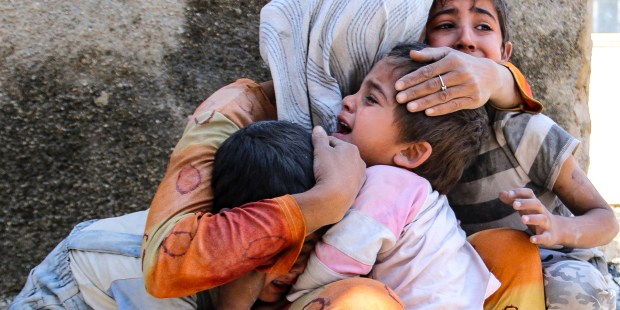 The needs of pregnant women in crisis go beyond borders

NPR reports that in 2016 alone, 4,600 people have drowned in the Mediterranean sea trying to reach the shores of Europe. For the past four months, a young Canadian family/emergency physician named Dr. Sarah Giles has been working with ith Doctors Without Borders on a search and rescue boat to help those who attempt the journey. Her experience of caring for female patients is a testament to the fact that caring for refugees is a pro-life act in more ways than one.

Giles told NPR’s Scott Simon that she helps a lot of pregnant women, some of whom have been raped. Sexual assault is such a common occurrence for refugee women that many seek contraceptive implants (placed in their arms) before they even leave home. Giles says the stories of what these women have been through “defies belief.” Here’s an excerpt from her interview with NPR:

These women had all fled their home countries for very good reasons. Sometimes they were being persecuted for their political beliefs. But other times they told me their parents had died and that they had been sold into prostitution. I met a 14-year-old who had been forcibly married at the age of 12 and was fleeing continuous rape at home. So just the act of leaving their homes was a brave start. They were smuggled across Africa, some of them walking across the Sahara. One woman told me she started in a group of four and she was the only one who had survived. They then had to travel through Libya. People who are smuggled through Libya are often kidnapped multiple times. So they’re kidnapped, sometimes tortured. They have to pay off their kidnappers somehow, sometimes that’s through forced prostitution, forced labor.

Rape has long been used as a weapon of war, oppression, and ethnic cleansing, and has become part of the journey of escape for so many women. Giles says she speaks to many of her patients on the boat about rape. (Men have been raped, too, but they tend not to come forward and women are more often the victims.)

One of the most difficult parts of Giles’ job is telling a woman she is pregnant from the result of rape. Some of the women also ask to be tested for sexually transmitted diseases which Giles arranges for them once they can make it to Italy, since such testing can’t be conducted on the boat.

Who cares for these pregnant women after they are fortunate enough to survive the passage across the sea and make it into a European country? While there are complicated issues involved in receiving and assisting refugees, these vulnerable women and children are in need of protection and help.

Giles says she doesn’t know the answers to preventing the atrocities these women have experienced, but the number one thing the West can do is to stop criminalizing the act of seeking refuge.