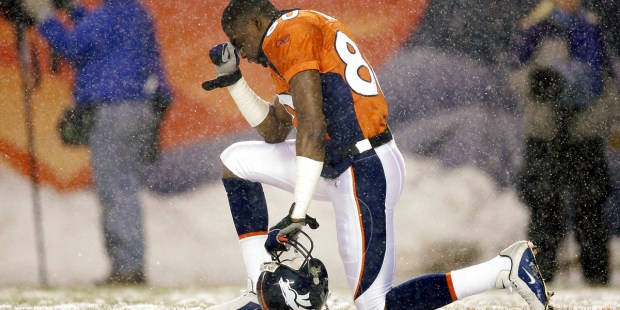 Secular reporters are often baffled when NFL players share their faith and quickly try to ignore it.

“The biggest under-covered story in the NFL every year is how huge a factor faith in God and Jesus Christ is in the playing and coaching of the sport. Every day, in season and out of season, coaches and players (and women on staff) pray before they begin their duties and often ask God through Jesus Christ for guidance and health in the carrying out of their functions. Yes, they get paid and rewarded, but for many, everything they do is unto God. It is their motivator and at the center of who they are. In times of adversity, which come often in the NFL, they turn to their faith for answers, strength and encouragement. That touchdown celebration you see every weekend, where guys point to the sky? That’s not the first or only time these men address God, Christ, and heaven, but rather that is the public view of a deep and daily walk and relationship these people have with their Lord.”

Salguero explained that secular reporters are often baffled when NFL players share their faith and quickly try to ignore it.

“When sideline reporters ask a question after the game and the player says, ‘First I want to thank my Lord Jesus Christ,’ the follow up is never, ‘For what? What did He do for you?’ The follow is more likely about a touchdown run or turnover….faith in God and Jesus Christ among NFL people makes the media uncomfortable and reporters and news organizations run away from the topic.”

Many NFL players during this past season have been openly talking about their faith and it has reignited a conversation on the role of faith in the world of sports. For example, after Oakland Raiders quarterback Derek Carr suffered a season-ending injury, he wrote on Twitter, “Thank you to everyone that has been praying for me! Things happen in life that we don’t always understand, BUT I do KNOW this: I serve a God that loves me and this is the ultimate healer!”

Even before the NFL season began, numerous athletes brought God onto network TV during the Olympics in Rio and confounded reporters who did not know what to do when gold-medalists praised God for their success.

Read more: 10 Olympic athletes who were not afraid to share their faith

In the end, athletes have realized that they do not have to be divorced from their Christian faith if they want to be successful on the field and this is something that the world continues to not understand.