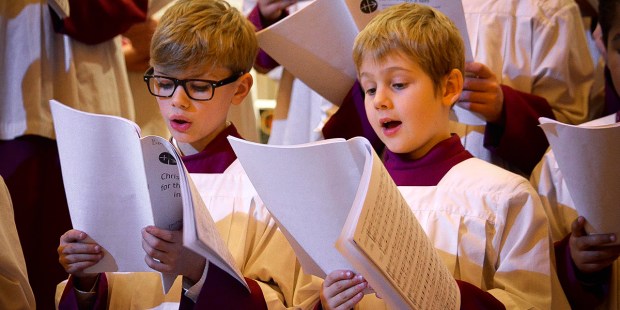 If you have seen The Lord of the Rings, The Phantom of the Opera, or Harry Potter and the Prisoner of Azkaban, you have already heard these heavenly voices. Now, for the first time, the London Oratory Schola Cantorum Boys Choir has produced their own album with the help of Sony Music Masterworks and AimHigher Recordings.

Entitled Sacred Treasures of England, the new recording features music from the English Tudor era and includes motets by composers such as William Byrd, Thomas Tallis, and Christopher Tye. The result is truly stunning and showcases the beauty of the human voice.

According to AimHigher Recordings CEO Kevin Fitzgibbons, “Mirroring the majestic beauty of the Oratory itself, the repertoire from this debut recording is gorgeous and timeless. We are grateful to all at the Oratory who made this great artistic moment possible and are excited for the new global collaboration with Sony Classical.”

Founded in 1996, the London Oratory Schola includes boys ages 8-18 educated at the London Oratory School. The members of the Schola, immersed in the rich classical tradition of music at a young age, regularly sing at the Saturday Vigil Mass at the Brompton Oratory, a church led by the Oratorian Fathers. They also sing concerts, record soundtracks and tour abroad. They will be traveling to the United States later this year in October.

Charles Cole, Director of the Schola, explained the reason behind the release of their first album.

“This wonderful partnership with AimHigher Recordings/Sony Classical represents a unique opportunity for the Schola to bring sacred music from the Renaissance to a much wider audience…The stunning beauty of this music, which we specialize in, deserves to reach many more people who we hope will be moved by the sound of the boys’ voices.”

The music performed by these talented boys is breathtaking and is sure to amaze and inspire everyone who hears their heavenly voices. Sometimes we need to take a break from the busyness of our lives to simply “be” and listen to beauty. With Sacred Treasures of England, the London Oratory Schola delivers a feast of beauty that will lift you up out of your monotony and transport you to a heavenly realm, giving you a much needed reprieve.