How an Irish priest founded “Boys Town” in Omaha, Nebraska 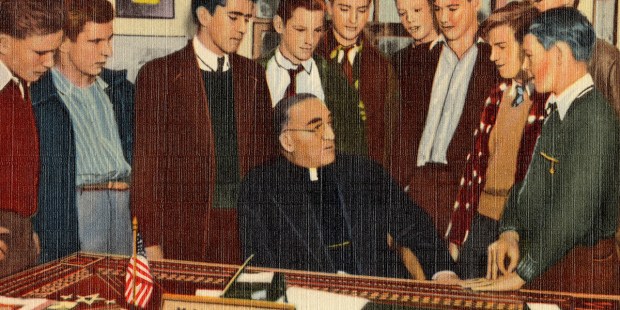 The story behind “He ain’t heavy, he’s my brother.”

It was somewhere near Omaha, Nebraska, and the year was 1918.  A young Catholic priest was walking down the dirt road near the boys’ orphanage he had recently opened. The priest came upon two boys, one carrying the other on his back. The priest stopped and said to the boy doing the carrying, “Well now, lad, he must be heavy.”

The boy, hunched over from the weight of the younger boy on his back, answered, “No Father, he ain’t heavy. He’s my brother.”

The priest had surely followed an unintended, circuitous route to find himself in Nebraska. It is believed that he entered the world prematurely. The story goes that during the first days of baby Edward’s life (he was the eighth of 11 children) his grandpa, Patrick, clutched his tiny grandson close to his chest. Then he sat by the hearth for hours on end with his big, calloused hands enfolded around the tiny baby’s body. The warmth, prayers and love that engulfed the child brought him through and he survived.

Edward Flanagan came to America in 1904. He had graduated college in Ireland and was able to enter Mt. St Mary’s University in Emmitsburg, MD. Here he received his BA degree in 1906 and his MA degree in 1908. From there he headed to Dunwoodie (just north of NYC, bordering Yonkers) and entered St. Joseph’s Seminary (often referred to simply as Dunwoodie).

Double pneumonia complicated by weak lungs from his premature birth forced Edward to leave Dunwoodie in his first year. He moved to Omaha, Nebraska, to be with his brother, Father Patrick Flanagan, and his sister, Nellie. They helped him back to full health and then it was off to Italy for more study. His next stop would be Innsbruck, Austria, where he was ordained a priest in 1912. After his ordination he was assigned back to Omaha.

Ironically, Father Flanagan wound up at St. Philomena’s Parish. St. Philomena, the patroness of babies and youth, may have been sending a subtle message from above as to where the young priest’s life would be heading. It was a only a few years later that Father Flanagan opened up a home for homeless boys in Omaha.

The bishop of Omaha, Jeremiah Harty, after being pestered by the spunky and tenacious priest, had finally relented and given his permission to Father Flanagan for the project. On December 12, 1917 (The Feast of Our Lady of Guadalupe), Father Flanagan moved five boys into his first boys’ home. It was called “The City of Little Men.” By June of 1918, there were 32 boys and by Christmas there were more than 100. By the spring of 1919 the capacity of 150 was reached and bigger facilities were in order.

On May 18, 1921, Father Flanagan secured the deed to Overlook Farm located about 10 miles outside Omaha. He managed to get five buildings built for his boys, and on October 22, 1921, they moved in. The Mother Superior of the Notre Dame Sisters, with a well trained group of teachers, set up a curriculum so all the boys could begin school at their own level. The name Overlook Farm was changed. The new name was The Incorporated Village of Boys Town.

Under his guidance and leadership the Boys Town community grew and prospered. It had its own boy-mayor, a chapel, school, a gymnasium and other amenities for boys aged 10 thru 16. Here, youngsters could learn a trade and receive an education. Father Flanagan’s best known quote might be this one: “There is no such thing as a bad boy.”

In 1938, MGM released the movie, Boys Town, starring Spencer Tracy and Mickey Rooney. It was a smash hit. Tracy won an Oscar for Best Actor and the world learned of the Irish priest and all about “his” boys.

Father Flanagan gained worldwide recognition and was named a Domestic Prelate by Pope Pius XI. After World War II, President Truman sent him as an emissary to Europe and Japan to advise officials about methods of dealing with all the war’s orphaned and homeless children.

Today, Boys Town stretches across America as one of the largest non-profit child care agencies in the USA. Over 2 million people have had their lives impacted through Boys Town. The Boys Town Research Hospital has received more than 8 million calls since it opened in 1977.

On St. Patrick’s Day, 2012, Right Reverend Monsignor Edward Flanagan was given the title “Servant of God” and his cause for canonization was forwarded to Rome.

Servant of God, Edward Flanagan, please pray for us.