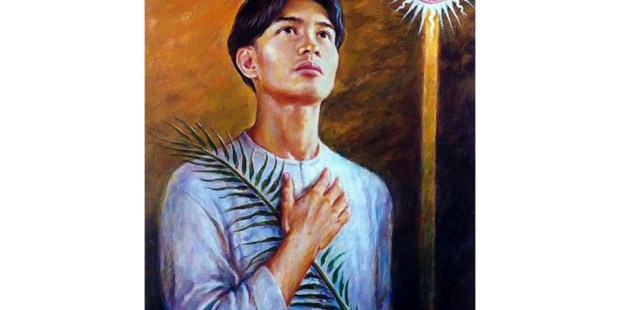 St. Pedro Calungsod was murdered while on a mission in the Mariana Islands

Pedro Calungsod was born in the Philippines sometime during July of 1654. He was a migrant child who was taken in by the Jesuits and educated at their boarding school in the Visayas island group of the Philippines. This is where he learned his catechism and how to speak Spanish.

Pedro was very smart and extremely devout. The Jesuits, seeing in the teenager a potential missionary, began preparing the young man for missionary work. They nurtured him in developing skills in painting, singing, acting and carpentry. The priests would take him along on their pastoral visits to the countryside, where he would serve Mass and/or teach catechism to the people.

In 1668, Pedro was among other young laymen selected to join Jesuit superior Padre Diego Luis de San Vitores in traveling to the Ladrones Islands. Their mission was to evangelize the native Chamorros. It is thought that a total of 17 people were in the party, which included mostly young laymen like Pedro.

The Ladrones had thick jungles, some impossible to get through. The steep cliffs were very hard to climb and it was a land of monstrous typhoons. But the missionaries did not give up and began to lead many of the natives to Christ. They went into the towns and before long had baptized over 13,000 local residents. Capillas (chapels) sprouted up as Catholic teaching spread.

Soon a school and church were built and dedicated to St. Ignatius Loyala. The Ladrones Islands were renamed the “Marianas” after the Blessed Virgin and the Queen-Regent of Spain, Maria Ana, who had financed the mission.

But hostility among the natives began to erupt when the Jesuits began challenging the traditional practices of the Chamorros. The natives would dig up the skulls of dead relatives and use them as “good luck” charms and  “miraculous” talismans. The skulls were secured in special houses and guarded by natives called “macanjas.” They were prayed to and asked for good luck, good harvest and victory in battle. The Jesuits tried to discourage these practices.

The Jesuits also objected to the brothels available to the young men, trying to teach them about the requirements of the sacrament of Matrimony. In addition, the higher class Chamorros demanded that the lower class people should not be granted Christianity because they were not worthy to be included. Anger and resentment continued to build against the Jesuits and their followers.

The jealousy and evil intent of one man in particular began to infect the natives of the “Marianas.” A Chinese man named Choco, who was on the islands after surviving a shipwreck, became jealous of all the honor and respect the missionaries were receiving. He began spreading the lie that the baptismal water the Jesuits were using was poisoned. His story received validation when several baptized babies died as the result of illness. It was all coincidence but timing was deadly. The people began to turn on the Jesuits.

On April 2, 1672, Pedro and the mission superior, Padre Diego, entered the village of Tomhom on the island of Guam. They were there to baptize a newborn baby girl. Padre Diego asked the baby’s father, Matapang, if he could baptize the child. Matapang, who had apostatized and now hated these Christians, angrily demanded that they leave.

They thought that if they gave Matapang a bit of time he might change his mind. They gathered some children and adults together near the sea shore and began teaching about the Catholic faith. They sent someone to ask Matapang to join them but he shouted the people away, telling them he was finished with Christian teachings. Matapang decided that he must kill these Christians to be rid of them.

Matapang went away to get the help of another man named Hirao, a non-Christian. Hirao refused but when Matapang insulted his manliness he agreed to help. Unknown to Matapang, while he was away Padre Diego and Pedro had gone to his hut and with permission of the mother, baptized the baby. When Matapang found out he was furious.

He and Hirao found Padre Diego and Pedro. They hurled spears at them and Pedro, in an attempt to protect Padre Diego, caught a spear full in the chest. He fell as Padre Diego gave him absolution. Hirao hurried over and finished Pedro off with a machete blow to the head. Then both Matapang and Hirao killed Padre Diego.

Their bodies were stripped, tied with rocks, taken out to sea and dumped overboard. Pedro Calungsod, at the age of 17, was martyred “in odium fidei” (in hatred of the faith). He was the second martyr from the Philippines following Protomartyr, St. Lorenzo Ruiz.

Pedro was canonized a saint by Pope Benedict XVI on October 21, 2012. He is the patron saint of the Philippines, of altar boys, catechumens and Filipino youth.

St. Pedro Calungsod, pray for us.

Blessed Diego, pray for us.