I was at my wife’s deathbed for one reason, and it had almost nothing to do with me 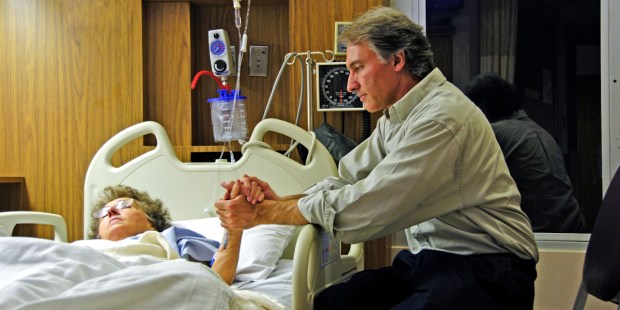 Just one phone call set in motion all she needed to meet Jesus.

I was standing next to an unconscious body that was being kept alive through the use of mechanical means and medications. Somewhere inside that body was my wife, Marty. She was on life support and my work of many years as her caregiver was either on hold or would soon be ended.

Marty has had Alzheimer’s for several years already, but as 2017 arrived, things had spiraled downward. Over these last three months, the disease has been markedly advancing and has affected her walking. Several times, she has even forgotten who I am.

One day a week or so ago, I wanted to give her the afternoon meds. She refused to take them. She said she could not let a stranger give her poison. I am accustomed to her unpredictability but this was a first.

I resorted to having a close friend come over to “identify” me to Marty. My wife was unflappable and refused to give in. After about a half-hour of cajoling, she finally, yet haltingly, relented and took her pills.

Last Thursday, Marty spent most of the day sleeping. She ate nothing. I attributed it to new meds she had been prescribed. Friday the sleeping intensified and again she did not eat. Saturday was worse and late in the afternoon, when I checked her vitals, her oxygen level was at 82.

The paramedics oxygenated her and took her to the ER. She was freezing cold and they discovered her core temperature was down to 93 degrees. Sepsis was suspected and later on validated.

By 4 a.m., she was in ICU and on life support. She had become “unresponsive” and needed to be intubated.

Through my jumbled thoughts in the midst of the commotion, one thought came crystal clear. Call the priest.

I immediately did. I was instinctively reaching out and taking advantage of my Catholic “edge.” It felt good to make that phone call. I knew help was on the way — help for my wife’s soul, regardless of what was happening in her body.

Fifteen minutes later I was in the IC unit, standing next to my wife who was in her life-support bed. All the machines, tubes and hoses made me feel I was in a science fiction movie.  The beeping and ticking was almost like the background for reggae music. She was sedated and had no clue as to what was going on.

Shortly after, Father Anthony, my pastor from Sacred Heart Church, came hurrying into the room.

Read more:
My friends had one last request: Would I help them get to Heaven?

I was also about to realize that the purpose of God’s plan for the three of us to be in that room, together, at that moment, was ready to unfold.

Father and I chatted briefly and then he went to work. He was about to administer the Sacrament of Anointing of the Sick (formerly known as Extreme Unction).

He opened his prayer book and began to read. Then he took holy oil from a little gold receptacle, dipped his thumb in it, and anointed Marty’s forehead and hands with it. He prayed some more and then it happened.

He said these words, “By the authority which the Apostolic See has given me, I grant you full pardon and the remission of all your sins in the name of the Father, and of the Son, and of the Holy Spirit.”

Marty had just been given what is known as the Apostolic Pardon. And I suddenly understood everything that was going on.

She was there, still alive, because God wanted her to be fully prepared for her impending journey, a journey that would now be straight and direct to Jesus Himself.

I was there because without me, the priest would not have been there to impart his power — God’s power — shared with him in Christ, by virtue of his ordination as a priest of God.

The moment belonged to Father Anthony, in persona Christi, a Catholic priest who had the power and authority to impart this pardon.

It was a beautiful and humbling thing to see. Marty is ready.

Today at Aleteia, learn more about the Apostolic Pardon and the Anointing of the Sick.