Come out of your tomb, and get to Confession 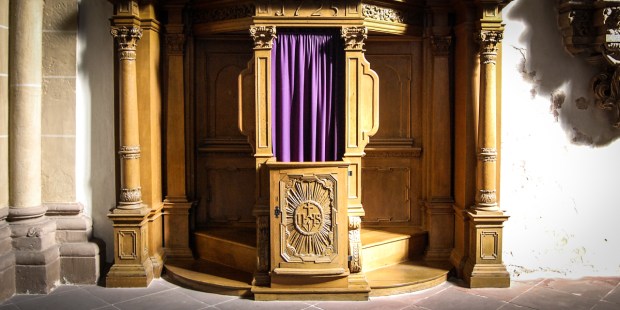 The apostles unbinding Lazarus represent the Church’s ministers … and you need them before Easter.

The readings for the 5th Sunday of Lent last Sunday were an odd but perfect mix.

Ezekiel and Lazarus both focus on the physical resurrection of the body, but then the psalm and Romans were all about sin.

Sick kids and split Masses meant that I was alone, so I could actually listen to the readings and homily, and think about them.

Why do sin and Lazarus go together? Why does the Church want us to think about them on the same Sunday, the last Sunday before Holy Week?  Because it’s time to come forth from our tombs and get to Confession.

Read more:
What part of you needs to die?

In the Greek New Testament, Jesus uses the same verb, aphiemi, to talk about freeing Lazarus from his bindings and to give the disciples the power to unbind people from their sins. The miracle of Lazarus is about the resurrection of the body, but like so many things God does, it doesn’t just have one meaning. Yes, Lazarus was raised from the dead. Yes, we’ll all rise again on the last day.

But we’re also all Lazarus right now. We’ve been baptized, so we’re alive in Christ. But our sins bind us. We can’t move freely and live fully Christian lives, because we’re so wrapped up in our habitual sins, even if we don’t have mortal sins on our consciences.

At the tomb, Jesus tells the disciples to unwrap Lazarus so he can move freely again. Later, when he institutes the sacrament of Confession, he tells them to go and unbind us from our sins, so that we can live a life of freedom in Christ.

Aelfric, the Anglo-Saxon abbot who left us massive collections of his homilies, says,

Christ raised from death the stinking Lazarus, and when he was quickened, he said to his disciples, “Loose his bands, that he may go.” They loosed the bands of the requickened man, whom Christ had raised to life. Therefore should our teachers unbind from their sins those whom Christ quickens by stimulation. Every sinful man who conceals his sins, lies dead in the sepulchre; but if he confess his sins through stimulation, then he goes from the sepulchre, as Lazarus did, when Christ bade him arise: then shall the teacher unbind him from the eternal punishment, as the apostles bodily unbound Lazarus.

Lazarus points us to the end of time, but he also points us to the Church, right now. Jesus calls to Lazarus to come out of his tomb, so that the disciples can unbind him. Then, and only then, can Lazarus live freely, alive in Christ. Jesus is calling you to come out of your tomb and into the confessional, so that you can confess your sins, receive absolution, do penance, and celebrate Easter. This week, be like Lazarus.  If you haven’t made your Lenten Confession yet, make it now, so that you can be truly alive as you celebrate Holy Week and Easter.