10 Beautiful biblical names to give your baby daughter 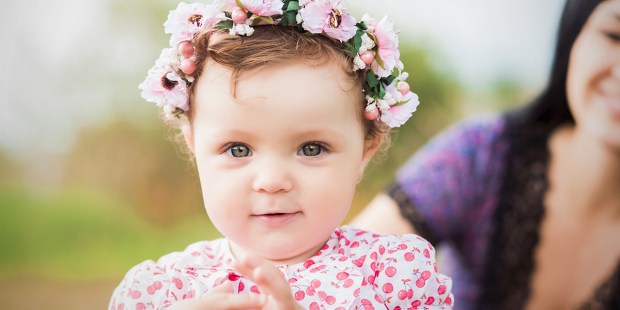 Find a meaningful faith-related name for your baby girl.

Choosing a name for your child means thinking about a name from all angles: The sound of the name, its meaning, maybe homage to a family member, and — why not? — faith. Many Christians want to give their children a name from the Bible. To help you on your quest for the perfect name, we prepared a list of suggested biblical names for girls and what they mean.

Mary: The origin of the name is uncertain, but it probably comes from the Hebrew Miriam or the Aramaic Maryam, with meanings that range from “bitterness” to “beloved child.” Mary was the one God chose to bear his son, Jesus. In spite of her surprise, she was always obedient to what God had promised her, as was her fiancé Joseph. They knew that what had happened to her was something divine. Her name is mentioned in the four Gospels and in the Acts of the Apostles.

Elizabeth: Some of the meanings of the name are “consecrated to God” and “God is my oath.” Elizabeth was married to the priest Zacharias and they were known to be very just.  She was the mother of John the Baptist, whose conception is considered a miracle because Elizabeth was elderly and sterile. Elizabeth and Mary were relatives, and we find her story in the book of Luke.

Anna (Hannah): The most well-known biblical story about Anna can be found in the book of Samuel. The meaning of the name is “full of grace” or “graceful.” Anna was one of the wives of Elkanah and was barren. The other wife, Penina, gave children to her husband, leaving Anna saddened. Nevertheless, she continued to pray, always keeping her faith in God. The situation explains why, at the time, it was common for a husband with a barren wife to marry again in order to maintain the family line. In her prayer for a child, she told God that if he granted her request, that child would belong to Him. And so it was. She gave birth to Samuel. Tradition gives the name Anna or Anne to the mother of the Blessed Virgin Mary, who also conceived a child after decades of barrenness.

Read more:
From Ambrose to Zelie: For Catholic Babies, Old Is the New New

Esther: This soothing name simply means “star.” In the Bible, Esther was chosen to be the wife of the Persian king Xerxes. He had asked his servants to bring him all of the most beautiful women in the kingdom so that he could choose his new queen from among them. Esther was Jewish, and she was able to intercede for the Jewish people at a time when the prince had decreed death for all of them. Her obedience to God and her trust in him were what she used to free her people. The story is told in the book that bears her name. Esther was the heroine’s Persian name; her Hebrew name was Hadassah, meaning “myrtle,” a fragrant tree with whose branches Jewish people build their outdoor shelters for celebrating Succoth, the “feast of booths.”

Eve: “Full of life” or “the one who lives.” She is the first human woman and her history is told in the book of Genesis. She and Adam lived in the Garden of Eden until they were deceived by the serpent, who induced them to eat the forbidden fruit. Although the name is related to a negative story, it is still deeply meaningful.

Deborah: There are two different meanings for the name. One is “industrious and hard-working woman” and the other is “bee.” In the Old Testament, Deborah was a judge who organized the people of Israel in the battle against the king of Canaan. Deborah was also a very wise prophetess and counselor of the people. Her story is told in the book of Judges.

Rebecca: “That which unites.” The wife of Isaac, Rebecca was the mother of Jacob and Esau. Rebecca was chosen to marry Isaac when Abraham (Isaac’s father) sent a servant to his homeland to look among his relatives for a wife for his son.  The servant cried out to God for a sign and Rebecca’s actions corresponded exactly to what he had asked of God: that a woman would offer water to him and his camels. Rebecca’s story is found from Genesis chapter 24 on.

Sarah: “Princess.” In the Bible, Sarah was named Sarai, only to have her name changed by God’s command. She was married to Abram, who also had his name changed to Abraham. She was barren until age 99, when she conceived Isaac by the grace of God. You can learn more about her in the 12th chapter of Genesis.

Talitha: “Little girl.” The name is not of a specific character, but the word has great significance in the book of Mark, chapter 5, when Jesus commands a girl who is already dead to get up. “And taking the girl’s hand, he said to her, Talitha cumi, which means, ‘Little girl, get up.’”

Rachel: This classic name means “gentle woman,” “ewe,” or “peaceful.” Rachel was the wife of Jacob. In order to marry Rachel, whom he loved from the moment he first met her, Jacob had to work for seven years. When these years came to an end, he ended up having to marry Rachel’s older sister Leah first. He accepted his fate, but he continued working for another seven years to be able to marry Rachel. Between Leah, Rachel, and two other wives, Jacob fathered 12 sons who would found the Twelve Tribes of Israel. Rachel bore Jacob two sons, Joseph and Benjamin, but she died at the birth of the second.

This article was originally published in the Portuguese edition of Aleteia.