For the Apostles, it had all gone to hell 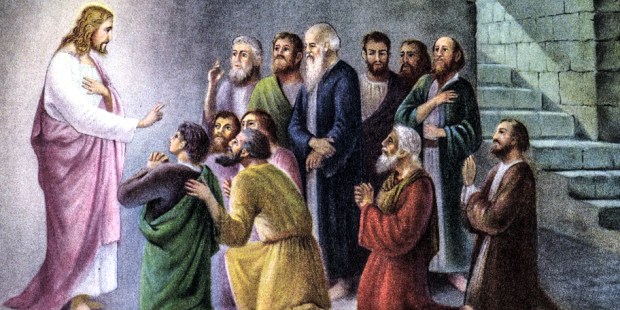 They had a great time, as far as we can tell. They were the best friends of a new star, a guy who had gotten mobbed in the street by his fans. Here they were having dinner with him in a private room. They were the insiders, the guys other people wanted to be.

And the foot washing, wow. He washed their feet. After that he’d done some funny things with the traditional dinner rituals, but they knew he had his reasons. There was that weird bit with Judas, but he’d left, and good riddance. Guy was a crook anyway.

The 11 disciples had it made. They’d been fishermen, tax collectors, things like that, and now they had walked through the capital city’s streets while a huge crowd cheered their friend. So things went early in the evening of that first Holy Thursday.

It was a great night for the Apostles — until it wasn’t.

You know the story. Jesus’ agony in the Garden, when even his closest friends couldn’t manage to stay awake with him. The sudden arrival of the soldiers led by Judas. Jesus’ arrest. The Apostles running away. The Jewish leaders grilling Jesus, threatening to have him killed. Peter outside, the guy who was always telling Jesus how great he was, screwing up spectacularly.

Jesus’ trial before Pilate, with the crowd that had mobbed him a few days before now screaming “Crucify him!” Pilate’s politically calculating decision, treating Jesus not as a man but as a problem to be solved. The soldiers flogging Jesus half to death. His long walk to Calvary through the jeering, spitting crowds.

The Romans torturing him to death on the Cross. The burial. The Apostles hiding out, not knowing if the Romans wanted to torture them to death, too. After all, the thorough Romans would kill as many people as they had to kill to keep order, and then some more, just in case. They had an empire to run.

For the Apostles, it had all gone to hell. At the top of the world on Sunday, the 11 were down at the very bottom in the early hours of Friday morning. One day minor celebrities, another day enemies of the state, and hated by their own people to boot. Time to sneak home, and admit to everyone back home that they’d been wrong about Jesus.

They don’t seem to be have expected things to go to hell. He’d told them things would go bad, but they didn’t listen. They could see how the religious leaders hated him and how the Romans saw him as a threat to public order. But everyone loved him, or so they must have thought, sitting round the table at dinner.

A little over a year ago, in the emergency room for a blood clot, my sister found she had late stage four cancer. It had already spread to her lymph nodes and the bones of her spine and skull. She’d had a rough life. Things never worked out. But a month before she had bought her first home. She had a new car that actually ran well, a job she liked, some very old friends nearby and many new ones, a new church.

She was on the top of the world. For one month, for the first time, at the age of 56. Then it all went to hell. She died less than six months later. She suffered the entire time, even with the drugs. I wrote about her death here, and it was painful beyond words.

That’s what happens in life. All the freaking time. In the midst of life we are in death, as the ancient Lenten antiphon puts it. And death plays games. He often waits until we’re happy and then hides round a corner to beat us to death with a bat when we walk by.

The movement of Holy Week from Palm Sunday to Good Friday teaches us that. Jesus had changed his friends, a lot. They’d never be the same after those years with him. But they hadn’t been transformed.

The Resurrection transformed them. Look at Peter. Before the Resurrection an eager, well-meaning screw-up who betrayed his Lord at the end. After the Resurrection, a man boldly preaching in public, standing up to the Romans, and (tradition tells us) asking the Romans to crucify him upside down — making himself suffer even more because he did not feel worthy to die as Jesus died.

In the midst of life we are in death. But in the midst of death we are also in life. Death plays its games, and we’ll hurt like hell — oh, we will hurt, some of you have no idea how much you’ll hurt — but death will lose. The movement from Good Friday to Easter morning teaches us that. Jesus died in pain. Then he rose.