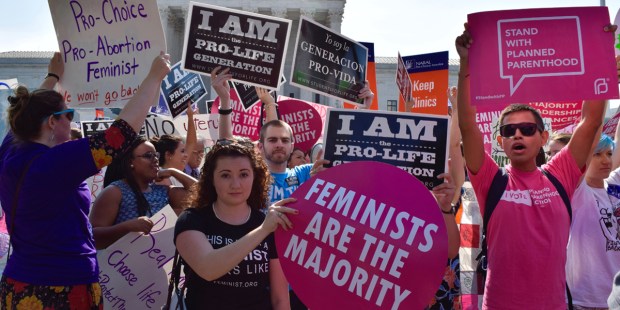 A very diverse panel of women, united only by the “feminist” label, discover the yawning distance between them.

We were sitting in an academic building, surrounded by professors and students in an environment that could definitely be described as cordial. The strong undercurrents, both on the stage and in the audience, however, were clearly raw and emotionally charged.

The six women panelists were talking about two things that most of the largely female audience at Catholic University of America care deeply about one way or another: abortion and feminism. And while the discussion centered around these two labels, the speakers defied stereotypes. One quipped that even if we learned nothing else during this event hosted by the Institute for Human Ecology, we would at least enjoy guessing who on the stage was pro-life and who was pro-choice—we’d probably be wrong.

The panelists included women of color and white women; Millennials and older generations; women with conventional professional dress and women with blue, green and purple hair. Three adamantly defend women’s right to “bodily autonomy” and “access to reproductive services.” The other three just as passionately believed in equality for “pre-born humans.”

This was not a talk about morality, religion or even about when a fetus becomes a person. It was a discussion stemming from the recent proximity of the March for Life and the Women’s March over whether or not one could be part of the pro-life movement and the feminist movement simultaneously.

As you can imagine, the answers varied and no one was backing down.

Pamela Merritt, of Reproaction, an advocate for “reproductive rights” in Missouri, registered surprise that pro-life women even wanted to be considered feminists. “Feminism is a social agenda to ensure equality of women,” according to Pamela. To her, it is clear that pro-life people work against this agenda by denying women access to abortion and to (free) birth control. So, she said, “No, one cannot be prolife and feminist. I can understand the attraction … It is possible to support and feel comfort in parts of the feminist movement. It is impossible to be feminist and be part of the pro-life movement.”

On the other end of the spectrum, Destiny Herndon-De La Rosa, of the New Wave Feminists, says that she is a feminist precisely because her mother chose life. Born to a 19-year-old unmarried woman, Destiny did not always have an easy childhood. And when she was 16, she too became pregnant, and decided to keep her child. She and her mother were both able to keep their children because of community support. “Abortion,” Destiny claims, “is a symptom of a society that has let women down.” She advocates for women, pre-born and fully grown, so that they receive the support they need in every stage of life.

Life Journal editor Aimee Murphy added that feminism and being pro-life are deeply linked. While sharing that her boyfriend raped her as a teenager and then threatened her when she thought she might be pregnant, she explained that she changed her views on abortion then and there. There was no way she was going to pass on what she saw as a “cycle of oppression”—men oppressing women, then women oppressing their pre-born children by aborting them.

Murphy argued that “Equality must be part of our essence, not a consequence of circumstances. It must also apply to pre-born human beings, both in society and in the law.”

Intense discussion revealed that the pro-choice women did not truly believe one could be pro-life and a feminist. The exception was Robin Marty, co-author of Crow After Roe, who said you could be both, but her definition of pro-life was different than what is commonly understood: she said she supported life, but also the freedom for other women to legally make other decisions. The pro-life women argued that they could be considered feminists and even took it a step further to say that if you were a feminist, you should be pro-life.

They were at an impasse. So, what now? Why bother continuing the discussion?

Sociology professor Megan Klein-Hattori believes that “all reproductive rights are central to feminist politics” and that the “polarization of abortion rights has hurt the women’s movement.” But she also believes that it may be possible for pro-lifers and feminists to work together on issues like sexual education for all children, birth control access for those who use it, career paths for parents, parental leave, etc. To her mind, allowing abortion to divide women hurts these “common goals.” It was notable that no one on the panel either confirmed nor denied that these were all, in fact, common goals.

Merritt added that she had seen instances where cooperation happened, but it was all too rare. In Missouri, for example, she worked with pro-lifers to advocate for pregnant incarcerated women who were forced to undergo labor and give birth while shackled. She advocates for abortion access as part of her job, but also works regularly with pro-life Catholic religious sisters who run a home for pregnant women, providing them with education and resources they need to thrive as mothers.

There is, then, room for collaboration on certain issues where both sides believed they could empower women. Yet, no one believed that abortion could ever fully be taken out of the feminist equation.

“The real question is how important it is to determine your reproductive future. Reducing that is dangerous.” – Pamela Merritt

We need to end “all aggressive violence against all humanity.” – Aimee Murphy

“Can you take abortion out [of the feminist equation]? You could potentially, but what are you doing with it then? What’s going on with abortion while we’re all working together?” –Robin Marty

By the end of the discussion and the question period, we had, perhaps come back right to where we started: labels.

These diverse women had a better understanding of the people behind the labels, yes. They could potentially work together on some common goals and initiatives. But, the labels were not artificial constructs that could be easily removed to put all women on the same page when it comes to feminist values or agendas.

Who these women were at their core, both on stage and in the audience, is very deeply affected by how they identify themselves: pro-life; pro-choice; feminist. As long as people disagree about abortion, it seems, they will also disagree about what it really means to be a feminist.