Mary, mystery and the minds of our children 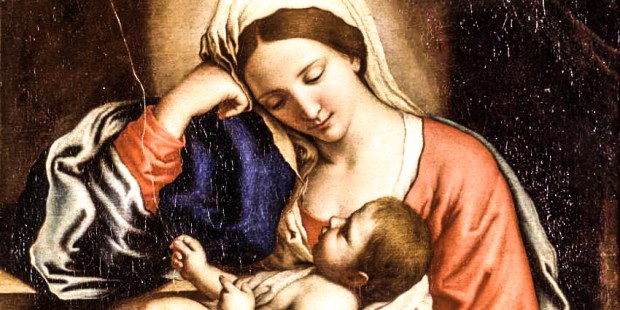 Beyond Fatima or Lourdes, who knows how often Mary comes to us or our children with a perfect assist?

As we head toward the centenary of the Fatima apparitions, during which the Blessed Virgin appeared to three children (two of whom are about to be canonized), it’s a good time to ask, Why does Mary so frequently appear to the very young, like Lucia, Francisco and Jacinta in Fatima, or Bernadette Soubirous in Lourdes?

To ponder it, perhaps we have to remember what it is like to be that young, again.

Because my mother was devoted to Our Lady, and also susceptible to Catholic kitsch, my childhood home was filled with small plastic statues of saints and devotional artwork that fascinated for the sheer incongruity of it.

On my bedroom wall, she had hung an image that looked for all the world as if Mary had brought the Baby Jesus in to a local photographer’s studio and posed for a portrait. The model, whose unnatural eyebrows seemed to have been inspired by Joan Crawford, wore lipstick and was dressed in Marian-blue robes, with a veil that vaguely suggested the starchy architecture of old-fashioned nun gear. Both she and Jesus were so rosy-cheeked they looked feverish, and the whole thing suggested something a middle-class Joseph would place on a desk in the backroom of his carpentry shop.

I loved it. My 5-year-old sensibilities missed such pronounced fakery; all I saw was a human lady, holding a human baby, and looking happy about it. Often in the evening, lying on my bed while my tumultuous family engaged in verbal rampages, I would contemplate the scene intently, noting the serenity of Mary’s brow, the chubby cheeks of the grinning Savior. Sometimes, it seemed to me her smile would broaden, as though Jesus had gurgled at her, and I felt privy to a moment of intimate joy.

Even as a child, I knew that was impossible, but as I grew older I would wonder: Could my imagination and weary eyes have been used by the Holy Spirit to communicate something reassuring to me about the depths of a parent’s love for a child? Sensible people will say no, but I’m willing to dare them and allow for mystery, because the Holy Spirit can use anything — even a bit of kitsch and our own synapses — toward God’s purposes.

In “The Story of a Soul,” St. Thérèse writes of being bedridden with fever, only to be healed after a statue of Mary seemed to smile at her. Many would read that and be justifiably skeptical; they would call her illness a psychosomatic event precipitated by the absence of a beloved sister and attribute her healing to self-hypnosis.

We moderns do feel better, and more secure, when we can reduce “things visible and invisible” to the ordinary with reasonable-sounding explanations.

But when has God ever been reasonable, particularly when it comes to Mary? Nothing about her being aligns with our reason. She was conceived as a pristine vessel, meant to act as the Ark of the New Covenant, yet she was given a choice, permitted to reject that role. Her God-and-son, pressed into service at Cana, put aside his own sense of timing and purpose to do her bidding.

Tradition tells us that, like Enoch and Elijah, she was bodily assumed into heaven, yet she keeps showing up on earth, so why couldn’t God use Mary and our minds to effect healing and consolation, particularly when we are young, before the gift of wonder has been educated (or jeered) out of us?

Mary has tended to reveal herself to children. That seems counterintuitive, doesn’t it? Why wouldn’t she appear to older people whose witness would seem more credible, less easily dismissed as childish imaginings? Perhaps the answer is that as we grow older, and become educated, our minds lose the capacity to see what reason and logic tell us should not exist. Or perhaps she goes to children because, aside from their openness, their motives cannot easily be dismissed as mercenary, or self-serving. At some point, a child’s unshakeable insistence becomes its own proof.

When one of my sons was around 5 years old, he saw something in the sky that terrified him, and his screams sent me running in his direction. By the time I got to him, he had gone quiet, and he was looking intently above a tree in our backyard. He told me there was a Lady. She too had appeared in the sky, and had stopped the terrible vision with a motion of her hand. She was now above the tree, smiling at him, her arms extended.

More than twenty years later, his story is unchanged.

Who knows how often Mary comes to us or our children with a perfect assist, not meant to be reported, investigated and deemed worthy of belief?

“Take care of your children’s hearts,” Pope Francis recently said to parents. He reminded them that “the children are watching.”

And they always see more than we realize.

Read more:
4 Reasons to say the Rosary every day: The Fatima connection